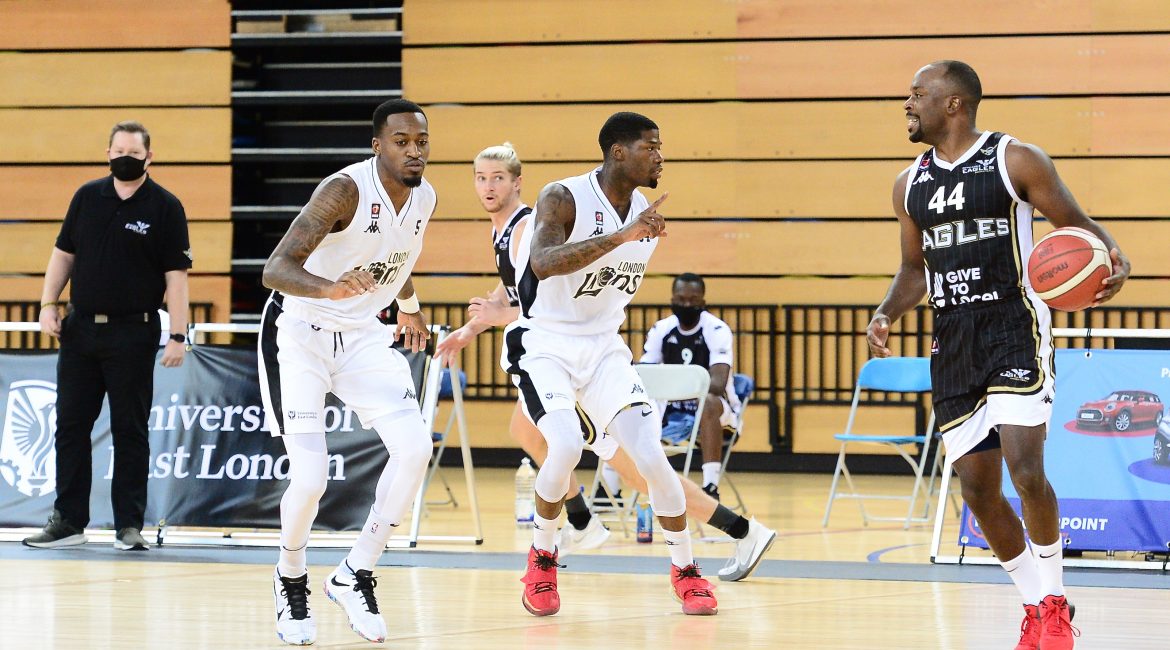 It’s another tough road trip for the Newcastle Eagles this afternoon as they travel to Leicester Riders for their second BBL Cup Group game.

But if the result is the same as last week’s stunning 89 – 79 overtime win over London Lions last Sunday it would be a perfect start for Head Coach Ian MacLeod’s men.

The star of last week’s show was new USA Import Justin Gordon who announced himself on the BBL with a massive double-double of 24 points and 17 rebounds. But, as always seems to be the case, the man pulling the strings was Eagles Captain, Point Guard, and on-court General Rahmon Fletcher.

Fletcher first of all reflected on last weekend’s heroics when his personal tally of 15 points and 8 assists certainly help guide his side to a memorable win.

“That was our first official game where we introduced our normal rotations and spread of minutes for each player. Yes, we had the Sheffield pre-season game but that was more about testing out our offence, our system and everyone getting used to each other.”

“Whereas London coming off a week of quarantine and only 3 days practice that was a big game for us not just physically but more mentally. To come out with that win especially in overtime was big for us.”

It was Gordon who hit a massive triple to tie the game with time expiring that took the game into overtime and Fletcher felt that score and the momentum that swung Newcastle’s way was crucial.

“First thing I said when we got to the bench was that ‘ok we’re here now and got to overtime let’s just take it now.’ Up to then both teams had played well and could have won and both teams would have taken away some satisfaction no matter how regulation had ended.”

“We played well at both ends of the floor and we played hard and getting the game to overtime meant it was effectively 0 – 0 again and we took our momentum into those five minutes and the guys came up big.”

That win was a great start to the campaign for The Eagles and no doubt gives them a great deal of confidence going into this afternoon’s game against perhaps their fiercest BBL rivals Leicester.

“You want to make it to the Cup Final and to be the best you’ve got to beat the best. It couldn’t be a much tougher start going down to London and now down to Leicester. It might have been different if it was home-home but it’s not. We did really well in London and now it’s time to see what we’ve got with Leicester.”

“There is a rivalry between the two sides but it’s kind of early to be implementing that thinking as both teams have new players and a different look. Yes, we’ve both got a couple of usual suspects that know what it’s about but in reality, it’s two new teams looking to win a game.”

“The likes of Drew (Lasker) Darius (Defoe) and myself know what it’s about and they have Coach Paternostro, Conor Washington and Jamell Anderson who know likewise. But you have to focus on yourself as it’s so early in the season.”

“Hopefully, we can focus on what we need to do. We’ve had a good week of practice and we’ve watched some film on them so we’re ready but I’m sure they are too. It will be a big advantage for whoever gets the win and we’re going to do what we can to make sure it’s us.”

“It’s a big challenge for us having two tough road games like this but it could also set us up really well before we come home next Friday to play the return game against Leicester. As always I’m excited for the game and the challenge ahead.”

This afternoon’s game down at Leicester tips off at 5:00pm as the BBL season really gets into full swing.

Fans can watch the live stream for just £4.99 on the Leicester Riders website with clips of the action and updates being shared across the club’s social media channels.