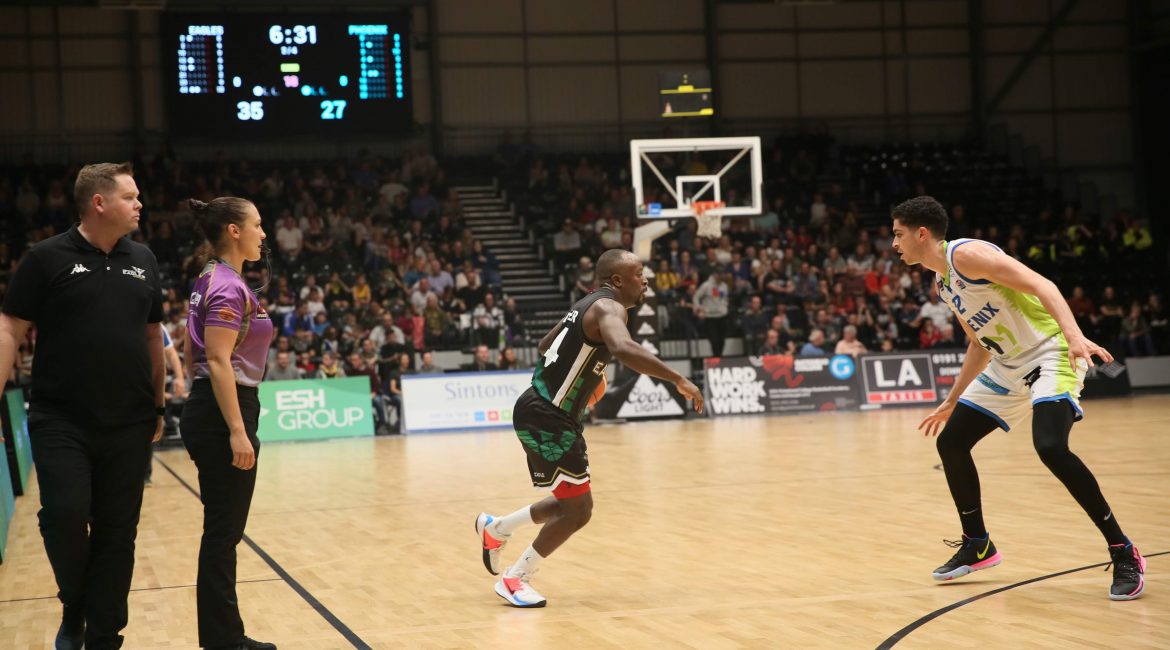 The Newcastle Eagles head north this afternoon to take on Glasgow Rocks in their second BBL Cup Group North game. They do so in good heart and full of confidence after Friday night’s stunning home win over Cheshire Phoenix by 97-68.

Interim Head Coach Ian MacLeod was delighted with the win especially given the unusual circumstances surrounding the players he was able to put on court.

“I’m really pleased. We showed signs of what we’re trying to build and I’ve been using that phrase about building since we came together, not just in the preseason games but in practices too. We put a lot of good things on the court but I still think we’ve got a lot more to give.”

“I asked the guys at half-time on a scale of 1 – 5 what gear they thought we were in and they said maybe 2 so that shows they believe they have a lot more to give. But we know what this is. Both teams were short-handed, we can do things a lot better and we know there will be tougher tests ahead.”

MacLeod faced a real dilemma for his rotations in his first official competitive game in charge. Injuries had robbed him of Sade Aded Hussein and Themba Yabantu. Then administrative red tape and registration confusions beyond his and Newcastle’s control took another three away.

Rodney Glasgow Jnr, Nick Schlitzer and Sauveur Kande were all denied the opportunity to play despite being fit meaning MacLeod and able Assistant Dave Forrester only had seven players to juggle for the full forty minutes. They didn’t do a bad job of it given the final result.

MacLeod though is confident that the situation will be rectified and injuries will be recovered from soon and is looking forward to having everyone available although that will not be in time for this afternoon’s game.

“It was a blow to find out so late that Nick and Sauveur wouldn’t be available and it could have disrupted us, but the guys who played came together really well. We’ll get that situation sorted out early next week, and also Rod’s passport is a simple paperwork issue in the US, it’s just a waiting game.”

Glasgow Rocks will give MacLeod and his clan a real test of their resolve. The Rocks also opened their season on Friday night with an impressive 96 – 80 victory at Manchester and the Eagles Head Coach knows it’s a hard game.

“Glasgow are a very well organised team. Coach Lavandier very much knows what he wants from his players and they’re tough. It’ll be a different prospect altogether. They’ll be well-drilled but it’s a challenge that we’re relishing.”

Friday night saw encouraging starts in Newcastle colours from Americans Mike Morsell who hit 17 points and John Mitchell who added 11 rebounds to his 13 points. Double figure points contributions from Drew Lasker and Eddie Matthew plus the ever-reliable Darius Defoe who had 14 points and 11 rebounds.

But at the heart of it all was the remarkable Rahmon Fletcher led his team superbly from the point guard position notching 30 points and dishing out 11 assists. MacLeod mentioned his on-court general in his round-up.

“It’s more of a surprise when he’s not sensational. He does so much and he’s such a good professional. He knew he had to play heavy minutes tonight. He did it well pacing himself and the team perfectly but then that’s what we’ve come to expect from him.”

“I had a decision to make when I took over. I could have run simply what I wanted to run, or I could run things that best suited the guys. I made the decision looking at what we have here and what suited these guys best, and everyone seems to be benefitting from that.”

A great start to the Eagles 2019-20 season then and they’ll be keen to keep that going today against their oldest and fiercest rivals tonight and go to Glasgow keen to keep building.

The game is free to watch on the BBL YouTube channel.