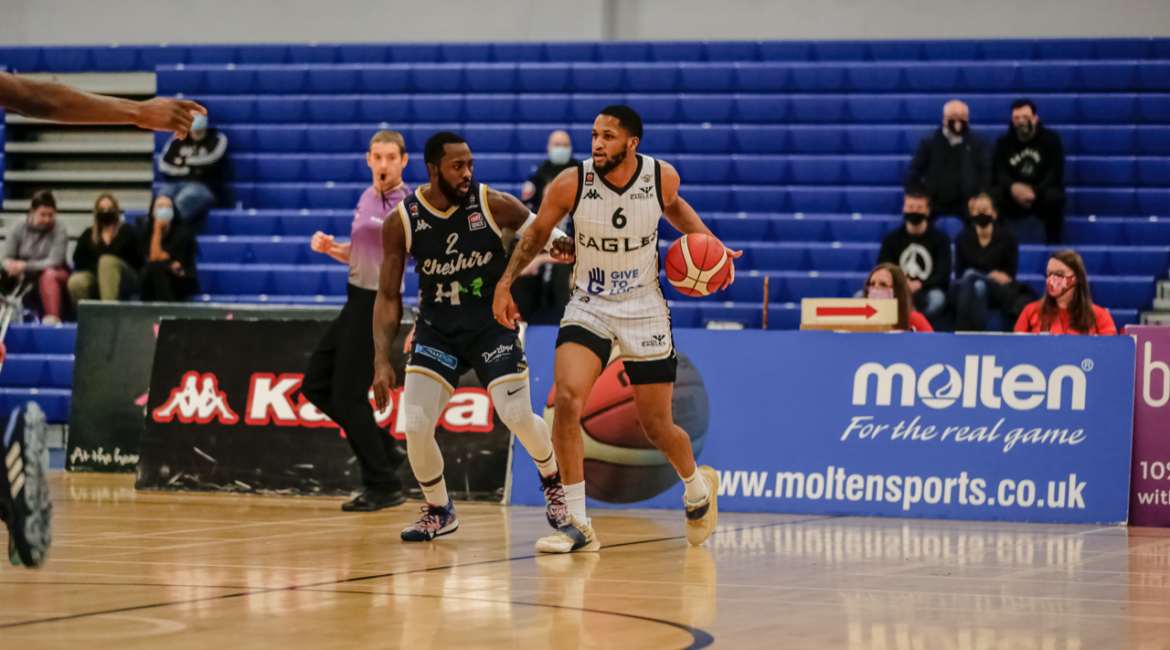 Newcastle Eagles go into today’s game at Cheshire Phoenix full of confidence after Friday’s big 109 – 95 win over London Lions. The Eagles lit up the Vertu Motors Arena with a dazzling team performance sprinkled with plenty of individual highlights.

Captain Rahmon Fletcher led from the front with 26 points and 14 assists, Louis Sayers stepped into the starting five and netted a season-high 24 points, Justin Gordon continued his fine return from injury with 20 points and veteran Darius Defoe weighed in with 14 points and 7 rebounds.

But in a game where in all honesty the whole team contributed one man in particular caught the eye and completed something he’s been threatening to do all season. A Triple-Double with double figures record in points, rebounds and assists as he went 10-14-12 for the night.

That man was Cortez Edwards and the Eagles sparkling combo guard was delighted to have finally achieved what has been a goal all season especially coming inside such a big and important win.

“It felt great. I’m super happy I can’t lie. We just played together as a team and made a lot of shots and it was a great night for me. As a team we just got back to our unselfish ways. Playing fast, playing defence, and getting out and running. We had fun out there.”

To score 64 points and be up by twenty points at half-time was a remarkable effort and some may well have considered the game over by then. But Edwards outlined how his team approached the second half and held off London particularly in the third quarter.

“We knew they weren’t going to stop attacking, they’re a Championship team and they can shoot the ball with the best of them. We just had to keep pressing on and did.”

The Eagles have been through a sticky patch recently after going into February as BBL Cup Winners and top of the league. Friday’s performance saw them bounce back to the tremendous style they were showing earlier in the season.

“We just had to get back to playing as a tea. Everyone identifying their roles and playing within them. Playing fast and playing aggressively for the whole game.”

Edwards’ personal milestone was a significant part of that effort and he knew as the minutes were ticking down he was close to finally achieving his goal.

“I knew I had a lot of rebounds and assists. Someone said I should shoot the last technical free throw which Fletch normally shoots so I knew I needed a few points which is why I shot a few more at the end and got there.”

“Its difficult because people have to make shots off your passes, you have to play good defence and get some rebounds at both ends and you’ve got to score. You just have to play hard and keep going which is sometimes difficult.”

“It was great to get the win though regardless of numbers. We’ve got to be turning in the right direction once the play-offs come. We want to take it a step further and keep our intensity and energy up and play our game.”

The next step on the race to the play-offs comes this afternoon against a very tough Cheshire side looking to cement their own place in that action and who have recently beaten both league leaders Leicester and London recently. Edwards knows it’s another big game.

“They’ve got great guards, their bigs are very skilled and they always play tough and give you a real game. We’ve got to be ready for the challenge and try and build on what we achieved tonight.”

A win today would certainly complete an excellent weekend for the Eagles and put the in a really good stead as the end of season comes fast and furious to its climax.

The game is live to watch on the BBL Player from 5pm.