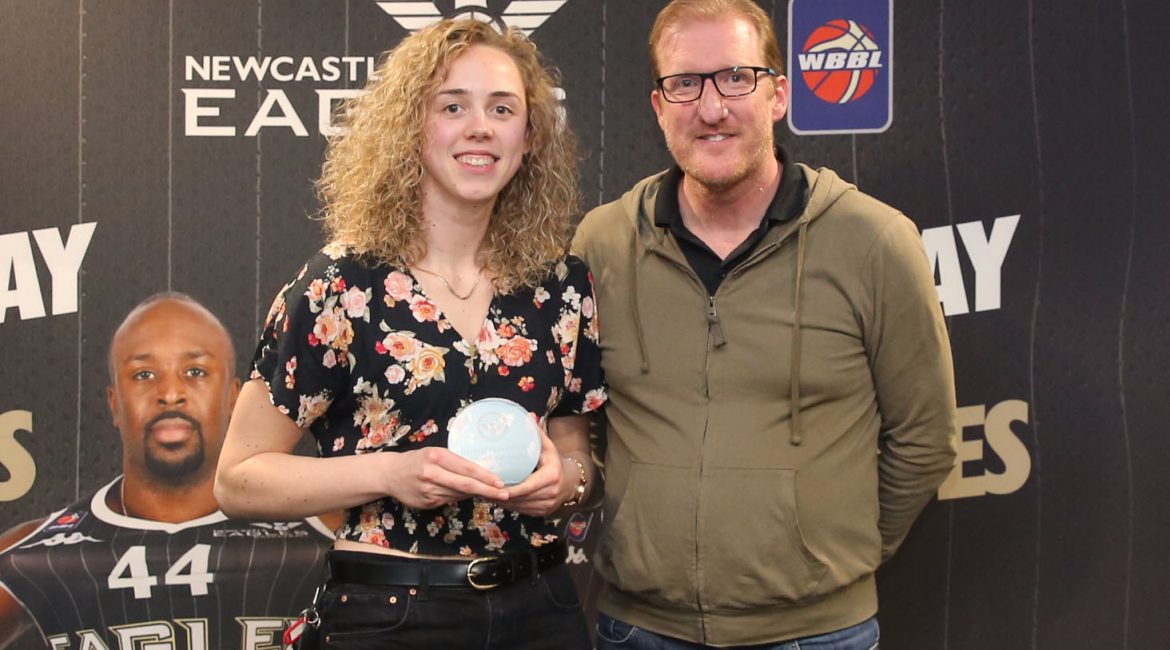 Chloe Gaynor was the big winner at last night’s Newcastle Eagles annual awards event as one of the rising stars of the WBBL scooped two major prizes.

The former Nottingham forward inked a deal with the women in black last summer and finished a challenging campaign in style.

Gaynor has flourished under new head coach Noelia Cacheiro and looks set to be central to this summer’s much-needed WBBL rebuild.

The fan favourite won the Most Valuable Player and Most Improved Player awards to cap a breakthrough campaign with Newcastle.

But the WBBL Team Player award went to skipper Marina Fernandez who, like Gaynor, emerged from a disrupted season with her reputation enhanced.

The super Spaniard led from the front this season as she guided an ever-changing roster to the brink of the playoffs.

And Fernandez’s decision to return to Tyneside — after her 2019-20 campaign was cut short by injury — proved a shrewd move.

The all-action guard averaged 12 points, five rebounds and four assists per game as she set the example on and off the court.

If Fernandez pointed the way in the WBBL, then two-time league MVP Rahmon Fletcher topped the team stats in three categories for Newcastle’s men this season.

And Fletcher set a new BBL season record for scoring passes as he eclipsed Alton Byrd’s previous best with 10.6 assists per game.

The 33-year-old was the unanimous winner of the Eagles’ 2022 MVP award with team-mates Justin Gordon and Brandon Peel bagging the remaining BBL prizes.

Gordon sparked a mid-season revival as Newcastle won the first three games of his much-heralded return.

And the forward slotted straight back into the groove as he averaged 18 points, six rebounds and three assists per game in his comeback campaign.

Gordon scooped the BBL Team Player award while Peel was rewarded for a strong finish to the season with the BBL Most Improved Player prize.

The former London Lion proved to be a consistent performer in the paint and led the Eagles in rebounds with 7.5 boards per game.

A packed awards night brought together players, staff, volunteers and fans at the Vertu Motors Arena.

And if all eyes were on the very best of the North East’s BBL and WBBL stars, then club bosses also took the opportunity to celebrate the off-court contribution of the award-winning Wings Team.

Yet again Newcastle’s off-court army met a challenging year head on and there was recognition for two of the club’s most committed volunteers.

“He’s also managed to find the time to support the BBL and WBBL set-ups as well as provide broadcast-ready highlights videos for regional television.

“Reece has been a real find. Aged just 13, he jumped straight into the deep end and quickly became one of our main game day photographers this season.

“His pictures have been used widely across social media, on our website and in the local and regional newspapers.

“He’s attended away games and the WBBL Cup final to establish himself as a key member of the Wings Team.”

Celebrations continued into the night at the Vertu Motors Arena’s Brian Manning Suite as the club thanked everyone for all of their support this season and fans got the opportunity for selfies and signatures with the teams.