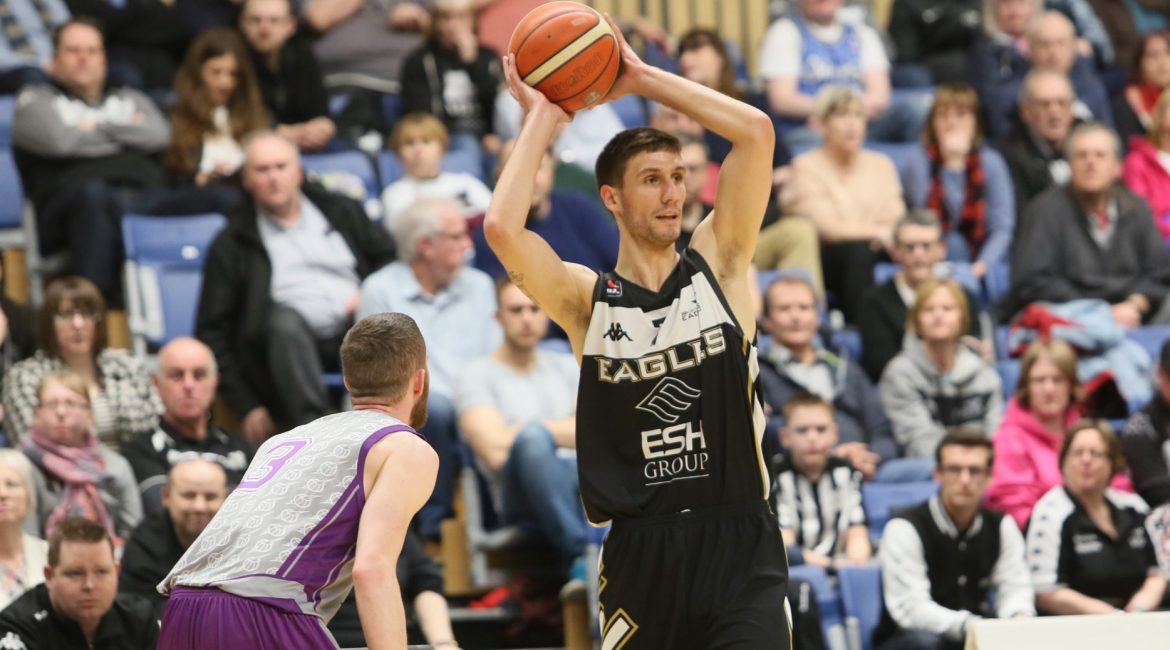 Jure Gunjina insists Newcastle Eagles are in no mood to give up on their BBL Play-Offs dream after the crisis-hit club confounded the critics with brilliant back-to-back wins.

And the in-form Croat revealed his team-mates never considered throwing in the towel despite the club enduring a series of mid-season losses and a number of serious knocks.

“Having the other guys out, having the coach hurt and our assistant coach sick threw the focus on Ian [Macleod] and the rest of us at a time when the games were piling up.

“But we’ve come together during the last two weeks – on the court and off it. It’s helped us to build some momentum heading towards the playoffs.

“Nobody on this team ever quit on Newcastle. We always believed that we could do big stuff but small things happened on and off the court that influenced our season. We’ll just keep on going and our next goal is to win the playoffs.”

Even making next month’s playoff final at London’s O2 Arena looked like a pipe dream as the Eagles followed a run of three successive homecourt losses with another three straight defeats last month.

But confidence-boosting wins against playoff rivals Worcester and Sheffield have consolidated second place in the BBL Championship. And both Drew Lasker and Darius Defoe should be back in the mix come the start of May.

Gunjina has stepped up in the absence of his team mates with 22 points and 15 boards in his last two games.

And he added: “I’m starting to find my best form. The last two or three months have been good for me. I’ve been practicing hard and been given an opportunity that I didn’t get earlier in the season. I’m making the most of that chance.”

Gunjina hauled down five defensive rebounds in Friday’s 82-58 win against Sheffield – a scoreline that proved Newcastle can revert to the stifling style that underpinned a decade-long run of success.

“When the opposition scores fewer than 60 points I think the coaching team can be pretty happy with the defence,” agreed the forward. “That’s what we’re trying to focus on – starting our offence with good defence. Good defence will get us going at the offensive end. “Offensively we’re pretty talented. We can score from pretty much any position and that’s never been a problem for this team. We just need to focus on defence and when we do we can beat anyone.”

The very thought of the Eagles suddenly rediscovering their defensive edge in time for the playoffs will send a shiver down the spines of opposition fans across the country.

And if Newcastle can consistently keep teams under 65 points then electric guard Jaysean Paige has the offensive game to bring home the wins.

“Jaysean is our main go-to guy,” added Gunjina, after watching his red-hot team-mate claim 24 points, 13 rebounds and eight assists against the Sharks. “He’s the leading scorer in the league for a reason. When we see his energy everyone else plays off that and that was the case against Sheffield and Worcester.”

Short-handed victories against the Sharks and the Wolves have suddenly transformed the mood on Tyneside but Gunjina is happy to take his foot off the gas…for now.

“I feel a little bit relieved that our schedule isn’t so busy in the next couple of weeks,” he admitted. “We only have seven fit senior guys and it’s hard to rotate so few players when there’s a match every other day. I

“t’s better for us as a team to have more rest right now – regardless of the momentum that we’ve picked up. It’s going to be good to get a couple of days off.”

Newcastle face the Wolves in Worcester on Friday before hosting Manchester Giants at Sport Central on April 20.