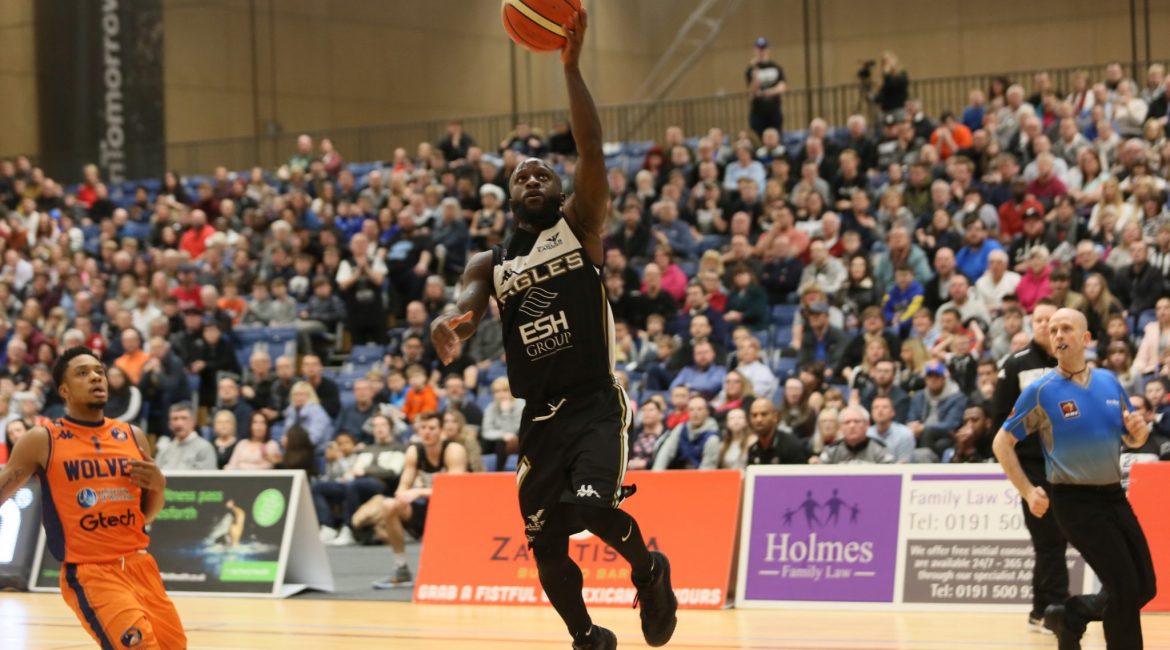 The victory not only strengthens the Eagles’ grip on second place in the BBL Championship but puts a wretched 10 days behind them.

With double-digit defeats away to Surrey Scorchers, Leicester Riders and London Lions all in the space of a week, the club needed a win to fend off the chasing pack.

Excellent scoring displays from Saah Nimley (21 points), Zarko Jukic (20) and Jaysean Paige (19) and a frantic final-quarter effort were key to sealing a valuable home win for Fab Flournoy’s under-strengthen side.

The opening introductions laid bare the scale of the hosts’ roster problems, as the announcer awkwardly introduced four players unable to take to the court.

With Drew Lasker in Australia for the Commonwealth Games and Flournoy, Darius Defoe and Terry Martin all injured, Newcastle were once more shorthanded against a team that have typically posed them problems.

An issue with the shot clocks giving different readings delayed the start but it didn’t make much difference to the Eagles, who came out playing at such a high tempo the shot clock never looked like a consideration.

But moving the ball at such speed brings with it inaccuracy and Wolves forward Alejandro Navajas made the hosts pay with a series of simple baskets, helping the visitors into a 17-15 lead.

And just as it looked like a frustrating first quarter was going to end with the Eagles trailing, they showed their explosiveness once again.

A 9-0 run in just 70 seconds completely transformed the complexion of the first 10 minutes to give the Eagles a 24-17 advantage.

But that scoring burst also served to re-emphasise the talent on the roster when they play up to their full potential – something which doesn’t happen often enough.

That the Eagles managed to fall behind just over two minutes after the restart shows the fragility they still harbour on defence.

Kai Williams, Jukic and Paige soon put Newcastle back in control, with the latter two showing bursts of their considerable offensive talent in the process.

With coaches Flournoy and Dave Forrester back on the sidelines after missing the defeats at Leicester and London, the Eagles held a 45-36 lead at half time.

Despite looking to pull away early in the third quarter, it felt like every time Newcastle scored, their opponents were charging the other end to hit straight back.

The Wolves sensed the chance to make a late charge in the same manner as Leicester and London, frustrating the hosts before slowly whittling away at the lead.

And by the end of the quarter, the Wolves had moved ahead themselves, only for a last-second Paige three-pointer to put Flournoy’s side 67-66 up with 10 minutes to play.

But after relying so significantly on a six-man rotation and with little rest after two massive games on Thursday and Friday, the Eagles were battling fatigue as much as the Wolves.

Frantically working away in defence and hustling for offensive rebounds, they just about managed to fend off Paul James’ side in the early stages of the fourth quarter.

As the game enters its closing stages, a pair of huge three-point shots from point guard Nimley and Jukic finally gave the breathing room Newcastle so desperately needed.

A tip-in and a dunk from the Dane moved the Eagles into an 85-78 lead with a minute to go, but a pair of quick Worcester scores set up a grandstand finish.

But one final Paige free-throw and a last-second Worcester shot coming back off the rim were enough for the Eagles to seal a key victory ahead of Friday’s home game against the fifth-placed Sheffield Sharks.