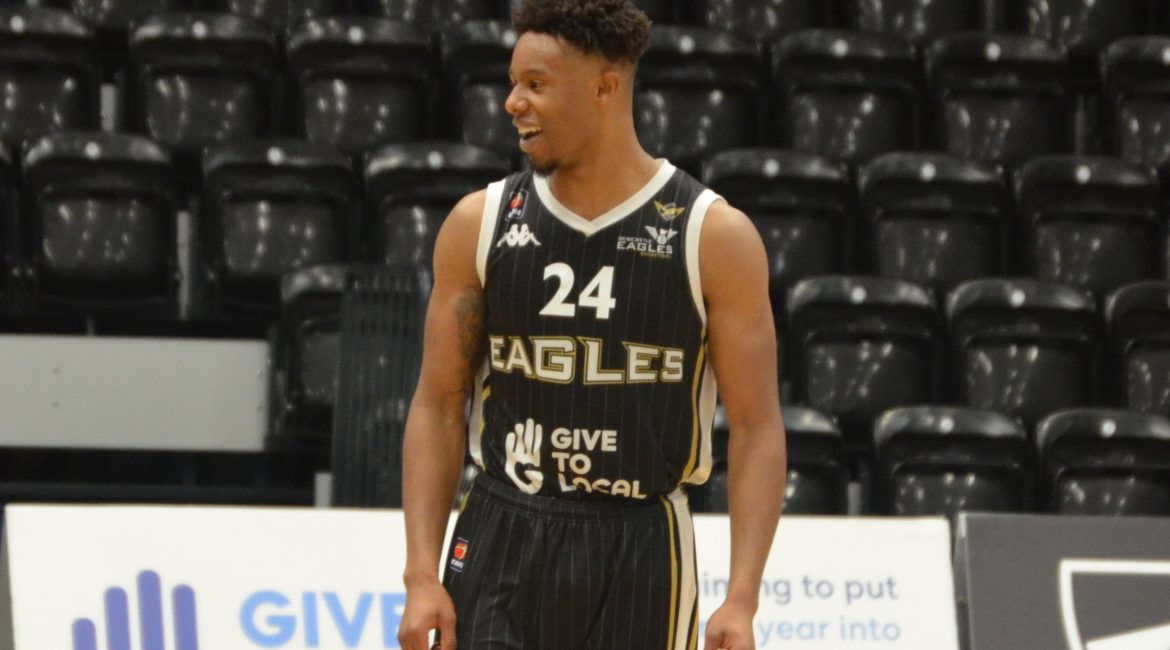 Justin Gordon can’t wait to soak up the full Vertu Motors Arena experience after finally getting his chance to play in front of a packed house on Tyneside.

The returning American played an entire season behind closed doors on his way to becoming a BBL Cup and Playoff double winner with Newcastle Eagles.

But tomorrow’s homecourt clash against Surrey Scorchers will see Gordon realise his long-held dream of running out in front of a partisan Geordie crowd.

“I’ve been amazed at the positive reaction to my return because I’ve never even met most of our supporters,” said the dynamic forward.

“I played an entire season in an empty arena and I can only imagine what the Eagles’ nest is like when it’s full of fans.

“I haven’t had the type of fan engagement that every player feeds off and Friday’s game can’t come soon enough.”

Gordon ended a difficult spell in Hungary by agreeing a new deal with Newcastle until the end of the season.

And Gordon admitted that it’s time to look to the future as both player and club look to finish the season in style.

“Newcastle is my third club since the summer and that’s not great but I feel as I if I can finish the season on a high.

“I’ve come back to a club that suits my style and, after the season I’ve had, the only thing I can do is move forward and focus on what I know I can do.

“I guess I’m in the same position as my team-mates when it comes to not having the best of seasons but together I’m convinced we can turn things around.

“I know exactly what it’s been like for the guys here. Things happen in sport that you simply can’t predict — a lot of non-basketball stuff has affected the team this season.

“But that’s all in the past and now we have to get back to what we do best.”

And the former Feyenoord star’s return to Tyneside looked like a match made in heaven as news broke about Shelton’s long-term injury last week.

“It was good to get the deal done,” he added. “As soon as I spoke to coach MacLeod I was looking forward to coming back to something that felt familiar.

“Newcastle is a fantastic place and I couldn’t wait to come back.

“There are still some of the guys here from last season and that was a big reason for me wanting to return.

“To join a club that I already knew and not need a period of adjustment worked well for both sides.

“It’s easier all round – for the club, my coach and my team-mates.”

In further positive news for Newcastle fans, Louis Sayers could return to the floor before the end of the month after resuming running as part of his rehabilitation.

The versatile guard broke his foot in December and was fitted with a protective boot for four weeks.

But Sayers is making remarkable progress following a frustrating spell on the sidelines and looks set to play a full part in the Eagles’ playoff push.

Newcastle face the Scorchers from 7.30pm on Friday with a limited number of tickets still available.