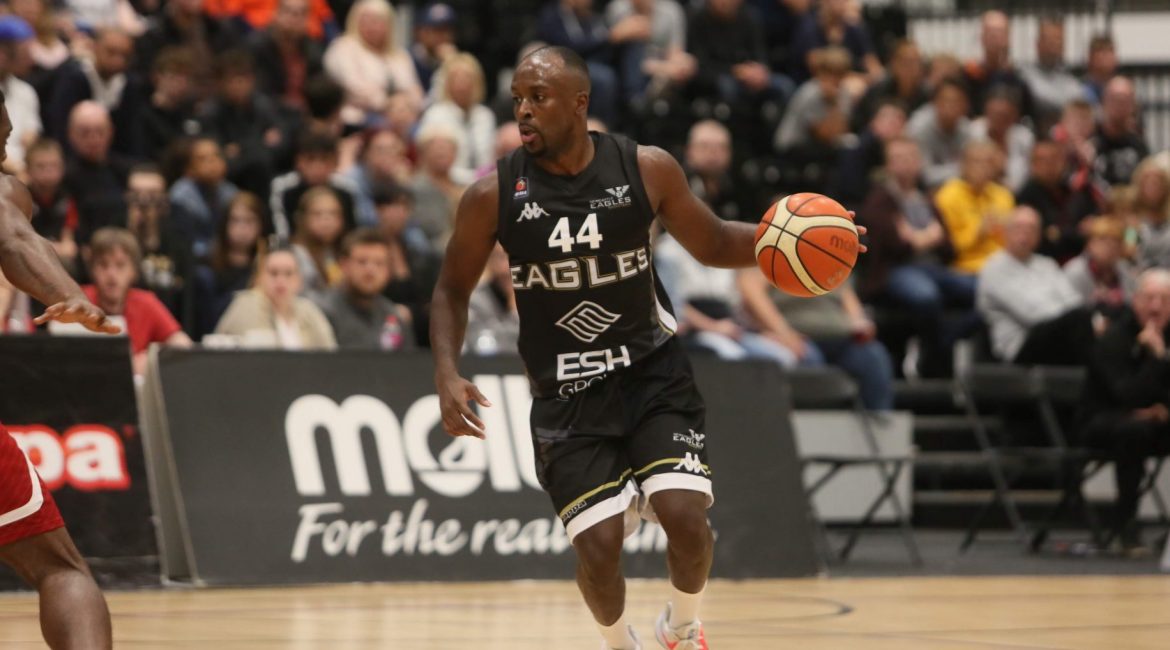 The first pre-season game without Fabulous Flournoy as Eagles head coach ended in a dramatic 1-point defeat 84-83 against Team USA Select, a side that the Eagles normally shake off comfortably.

But with so many outside influencing factors it was not perhaps surprising that the game virtually paled into insignificance. Although for those suiting up in the new-look Eagles kit which looked super smart, it was a useful first outing as they commenced their build-up for the new season.

The news of Flournoy’s departure was still reverberating around the Eagles Community Arena when the game tipped off and was still buzzing with the same topic long after the game ended. For on-court leader Rahmon Fletcher there were still positives on a night of mixed emotion.

The influential point guard whose leadership qualities may well be needed off as well as on the court with his play-caller and friend leaving the building and organisation. That was where Fletcher started his review of the Eagles first night’s work as the 2019-20 squad.

“It was different you know. Not hearing him going up and down the side-lines or getting his pre-game speech and stuff like that. But to be honest for where he’s going and why he’s going I’ll take that and can accept it.”

“I’m super happy for him and everything and I hope he does well. If he goes with the same work ethic up there as he brought here then the sky’s the limit. But from our point we now have to move forward.”

With the Eagles not only having five new players coming in to join the roster and looking at a new coaching set-up as well, Fletcher was philosophical about the night’s work and what’s to come.

“Right now, our first light training session was Monday night late and we managed to do a little bit this morning as well but in reality, this game was the first chance we’d had to go up and down as a unit.”

“I believe with this team we have the potential to be really, really good but that’s only on paper. It’s how you grow and execute what you plan that counts.”

One of the new guys on the team is Rodney Glasgow Junior who had 13 points and 6 assists on the night. Fletcher had played against Glasgow in Slovakia two seasons ago and is a fan. It would appear that they may well be backcourt partners which excites the two-time BBL MVP.

“I think we complement each other for sure. A backup point guard or starting two-guard next to me is something I haven’t had here at all. Not disrespect to Dre Jones or Dre Parks but another playmaker that can run the team, I’ve never had that. So, it’s going to be different but I think it’s going to work.”

Eagles have also brought in some real height in the frontcourt in the form of Sade Hussain Aded and John Mitchell. Mitchell unfortunately hadn’t arrived to start the game on Tuesday whilst worryingly Hussain limped out after six minutes of action in which he already had six points and three rebounds.

It appears that his injury was one that merely needed looking after rather than being anything troubling but Fletcher is hoping with the two new “bigs” on board along with veteran Darius Defoe that will make a real difference this season.

“From top to bottom I think we’re well-rounded. We’ve got a backup for each position. With Nick (Schlitzer) being a shooter (he made 4 of 5 from three-point range to lead the Eagles scorers with 14 points) and coming off the bench. Big Sade and John coming in and don’t forget Mike Morsell as well who along with John wasn’t here tonight.”

“So, this wasn’t real testimony to you we’re going to be. We were two players down and lost Sade early and haven’t really practiced initially so I think we’ll be fine and it’s going to be a lot of fun.”

Obviously, Eagles having assembled a roster for the season are now looking for a new Head Coach to take the helm. Fletcher had his own thoughts about that position but was playing things pretty close to his chest but realises he himself has a big part to play.

“Oh yes, for sure. Since I’ve been here, I’ve kinda been the second coach on the court. So, it’s something that I’ve been groomed with, something that I’m comfortable with and whoever takes the Head then we’ll just bounce off each other.”

The Eagles return to pre-season action almost immediately with Worcester Wolves visiting the ECA on Friday night, the game tipping off at 7:30pm. With new Head Coach Matt Newby, the former Leeds Force coach, and his new look roster being in town, Fletcher is already looking at that game.

“That’s a BBL game right there. We can use our experience of this game, watch film to work on our flaws particularly what happened at the buzzer. If we’d have won that game it wouldn’t have covered up what we did wrong.”

“Hopefully with all the guys in and a couple of extra training sessions we’ll be ready and we’ll be fine. It’s another step towards the bigger targets.”

Clearly Fletcher is focused and whilst he accepts the loss of Flournoy as somewhat of a surprise it doesn’t seem to have affected him as he still managed to dish out 11 assists as well as 13 points on the night to show he’s ready to take The Eagles forward.