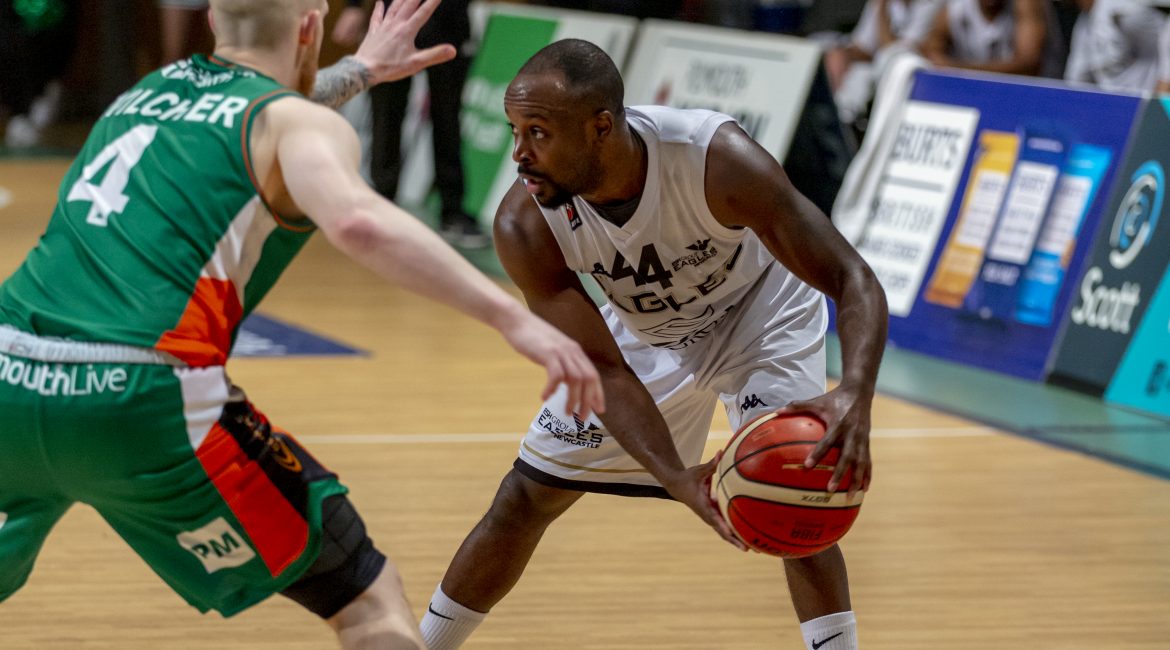 It will not have escaped the attention of many with a sporting mind that this Friday sees a huge moment in the history of professional sport in Newcastle with the sold-out opening of the brand-new Eagles Community Arena.

One of those definitely excited about Friday’s game against Plymouth Raiders is on-court general Rahmon Fletcher. The point guard who is very much the roster leader though knows his side have got to keep perspective and focus as there is a game of basketball to win.

Fletcher started his own preview by referring to his side’s terrific away wins at Leicester and in particular Plymouth on Sunday who ironically are the first visitors to the new “Eagles Nest” for another vital BBL Championship game.

“We had a few games which weren’t ideal for us especially at the defensive end so we went back to basics before Leicester and I think we’re making progress. We showed a little bit in the Leicester game and we built on that in the Plymouth game and it’s something that we’ve got to continue to do.”

“Having seven players scoring in double-figures on Sunday gives every one confidence not just the usual people that score. When you’ve got people that chip in with ten or eleven points it takes a lot of pressure off those that usually do score.”

“It’s the type of team that we have. We’re super-talented all around. We’re going to make plays and we’re going to score just off our skill levels. But if we do it the way we did against Plymouth then the sky’s the limit.”

With the win in The Trophy against Edinburgh in the last home game at Sport Central followed up by two great road wins against very tough teams it would seem the confidence should be high going in to Friday’s showpiece occasion.

“I think it’s our intent. Our intent is to play our defence which builds our confidence. At the beginning of the season we rarely ran plays and relied on our transition from our defence which is something at The Eagles that we pride ourselves on.”

“We lost that a bit and it affected results. But I think it’s starting to come around and we’re starting to show that intent again in the right way and that means our offence will come.”

“People keep asking me how excited I am for Friday. We’ve practised in the new arena for a couple of weeks now but it still hasn’t hit me just yet. Every time we show up for practice there’s always something new to see. Day by day I’m getting more excited but it still hasn’t reached 100% yet bit it’s getting there.”

What Fletcher is well aware of is that they don’t let the outside attractions and emotions divert their attentions to the job of winning the game and staying in the BBL Championship race.

“I think we’ve got that group of guys that know we have to take care of business first before we can enjoy the stuff off the court. Of course, it’s going to be emotional and Plymouth’s going to try and win not only to revenge themselves for Sunday but to make our opening night not what we expect.”

“If I was in their position, I think I would have that added motivation to play in that type of occasion and be ready if we’re not 100% focused. But I think we’re at that time of the season when winning is more important than what’s going on off the court.”

“It’s going to be a special night of course but we’ve got to make sure we get the win so we can enjoy it all the more. I’m really looking forward to it as all the guys are and we want to start off in our new arena in the right way.”