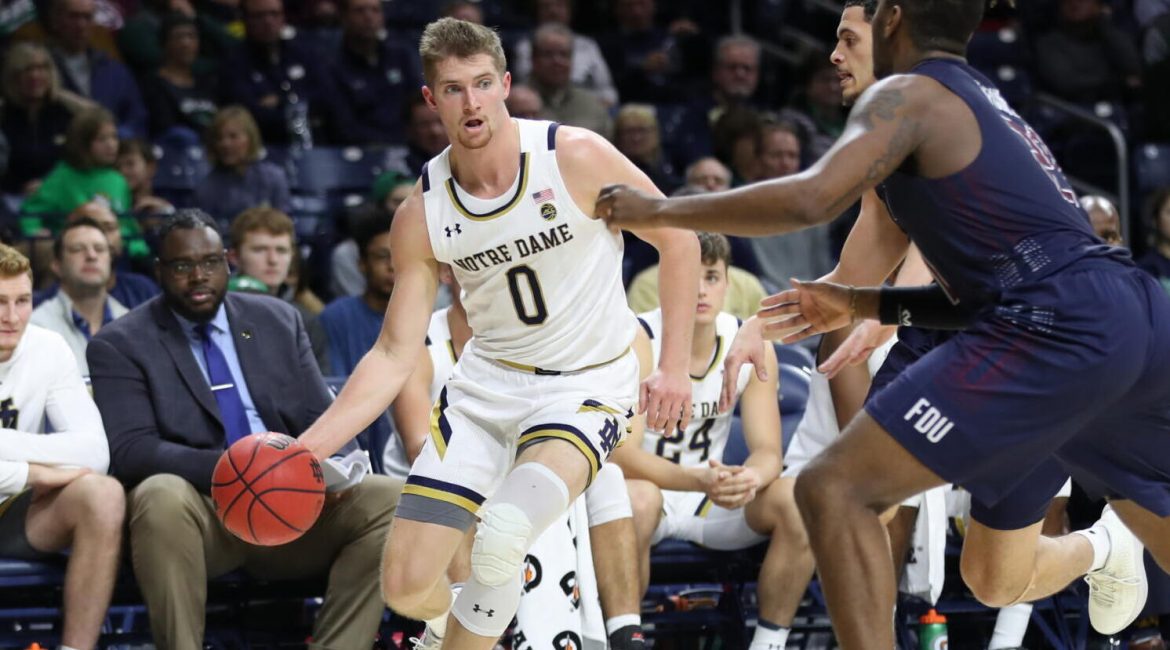 A star of the NCAA Division 1 University of Notre Dame, a major college of the powerhouse Atlantic Coast Conference, Rex Pflueger will begin his professional career at Newcastle Eagles.

The 24-year-old had a stellar five year career with ‘The Fighting Irish’, during which he broke the school record for games played featuring 141 times in the line-up.

Pflueger comes to the Eagles with the advantage of already holding a UK passport in his possession, courtesy of his late mother who was English by birth. This was one of the biggest considerations in him deciding to come to the BBL.

“It feels great knowing that I will be starting my professional career in a country that I am very much familiar with”, he said.

“My mother was born and raised in Andover before eventually meeting my father in the US and moving out here full time.”

The 6’6” guard was eligible for a fifth year at following a season-ending injury in what would have been his final year.

During his five years at the Indiana college he twice averaged over 8 points per game and ended his college years averaging 5.4 points, 3.2 rebounds and 2.4 assists per game. Rex is a player of whom his head coach, Mike Bey, said is “like a son to me.”

Newcastle had another ace in the pack when it came to Pflueger’s recruitment with former Eagles star and a fellow Notre Dame alumni member Scott Martin, who spent four highly successful years on Tyneside, now on the coaching staff at his alma mater and able to impart his experience of the BBL, the club and the city.

Rex was a regular starter and captain at his college and becomes the Eagles sixth confirmed signing of the summer.

“I am truly excited to compete and hopefully be able to play in front of my extended family members out there whom many have not been able to see me play in person yet”, he added.

“His experience with the team definitely facilitated towards my decision to join Newcastle, but I still believe the most prominent reason was for the chance to be closer to my English family and experience a culture that is part of my heritage.”

His previous teammates speak highly of Pflueger, who was known for his all-round contribution as a team player and a leader on and off the court. Attributes he wants to bring to the Eagles as he continues his basketball career.

“I hope to bring a little bit of everything to the team. My main goal at any level has always been to win and that’s what I plan to contribute”, Pflueger told us.

“My personal aims are to not only help the team win, but also improve my skills and leadership along the way to become the best basketball player I can be. I’m excited to be a part of the Eagles family and now let’s go get it!”

Newcastle head coach Ian MacLeod is hoping for a great contribution from his rookie recruit, a player he’s had his eye on for some time.

“I’ve been watching Rex for around four years and his high-level NCAA experience combined with British Passport makes him a great addition.”, said MacLeod.

“He has played well over 100 games in one of the toughest conferences in America and has a reputation as a great decision maker and a player who does not shy away from responsibility.

“A captain, a leader and someone who will contribute to multiple phases of the game.

“I expect big things from Rex.”

An extremely exciting signing for the Eagles and one that will no doubt delight their loyal fan base as they continue to put together an impressive roster for the forthcoming season.