Tyneside Trio To Take Off In Toon

Newcastle Eagles/News/Tyneside Trio To Take Off In Toon 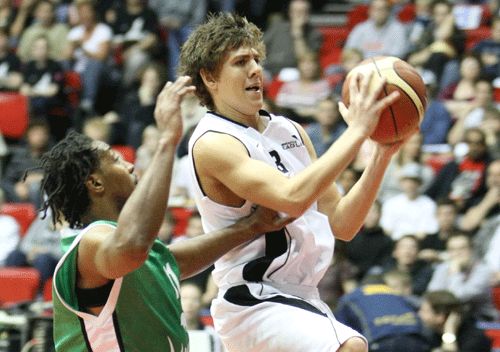 Newcastle Eagles are thrilled to announce the return of talented trio Will Spragg, Aaron Nielsen and Sam Attah for the 2008/09 BBL season.

The players all return after ending last season in fine style with an exceptional performance in the third/fourth place game at the BBL Play-Off Finals in Birmingham during May.

Geordie boys Spragg and Nielsen burst onto the first team scene way back at the start of last season having spent a couple of years working alongside player coach Fab Flournoy while Attah came via a starring role for the University of Northumbria who have strong links to the Eagles.

Flournoy has been at pains to point out that they aren’t just being signed by the club to make up the numbers and shouldn’t just be seen as benchwarmers.

He explained “I have been very impressed with their development of late in particular. Obviously Sam is a little older and more experienced while Aaron and Will just keep getting better and better.”

“These guys play so hard in practice and I truly believe that the future of the club can be in their hands and it is their destiny to play a big part in the future success of the Eagles.”

“They are all capable of pushing for more and more court time and even a starting place which some people might think is too ambitious but with these guys the sky is the limit if they keep working hard and progressing.”

“The biggest point I want to make is that I actually feel genuinely excited at the way they are developing and how they are playing.” Continued Flournoy.

“The way things have panned out I have spent a lot of time with Aaron in particular during the summer and he has been just unbelievable.”

“He is like a sponge in taking in information and getting his basketball IQ right up there with the experienced guys. This combined with his talent means he has a genuine opportunity to make an impression in the BBL.”

“These guys are very young still but they can go far.”

Attah, Nielsen and Spragg will be available for the Eagles first pre-season game tomorrow night against Team USA Select while the return of the trio isn’t the clubs only investment in young players with a further exciting announcement to be made in the next couple of days.