The Big One For Women’s Basketball

Newcastle Eagles are urging communities across the North East to back a record-breaking bid to showcase elite women’s sport in the region.

Book Tickets for The Big One now

Newcastle hope their cross-border clash with Caledonia Pride later this month can be a catalyst for driving the future of women’s basketball. 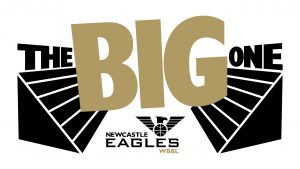 And the Eagles have identified the eye-catching Vertu Motors Arena fixture as a key staging post for aspiring female players seeking a pathway to the top level.

Dan Black, Sales and Communications Manager at Newcastle Eagles, said: “The incredible support from our WBBL team’s fans and sponsors has seen crowds at the women’s games more than double when compared to pre-COVID numbers.

“At the start of this season we selected the game against Caledonia Pride as an opportunity to do something big and hopefully break the league attendance record.

“What better time to do this than during March — Women’s History Month — and we’re proudly launching The Big One on International Women’s Day.”

The Big One takes place on Friday March 25 with the focus on presenting women’s sport in the region as an increasingly attractive proposition for supporters and sponsors alike.

Noelia Cacheiro’s Newcastle Eagles have gradually been growing their WBBL fan base this season following the decision to switch the majority of homecourt clashes to 7.30pm on a Saturday.

But the absence of a men’s BBL fixture on March 25 means the women’s team can benefit from the full Friday night match experience and take their growing profile to the next level.

Newcastle Eagles WBBL centre Chloe Gaynor said: “We’re really excited to have this big game coming up on the 25th ready to celebrate the women’s programme and all the great people involved in women’s sport.

“The fans have been fantastic all season long and have been growing in numbers, I’m so grateful to have the opportunity to play for them week in week out and I hope that everyone comes along to ‘The Big One’ on the 25th to support us at what will be an awesome event.”

It is hoped the Vertu Motors Arena attendance will top 1,500 — far and away the biggest attendance for any top-flight women’s game outside of a domestic final.

“The success of our franchise, including making the Play-Offs final last year and the Cup final last month, has put a spotlight on the WBBL across the region,” added Black.

“We can’t wait to fill our stands full of basketball fans — whether they’re interested first-timers or long-term supporters of our women’s team.

“This is a golden opportunity to show the people of the North East that elite women’s sport has a home at the Vertu Motors Arena and that the Eagles’ WBBL team is a roster worth watching.”

Tickets for The Big One are on sale now from the Newcastle Eagles Box Office.

Book Tickets for The Big One now