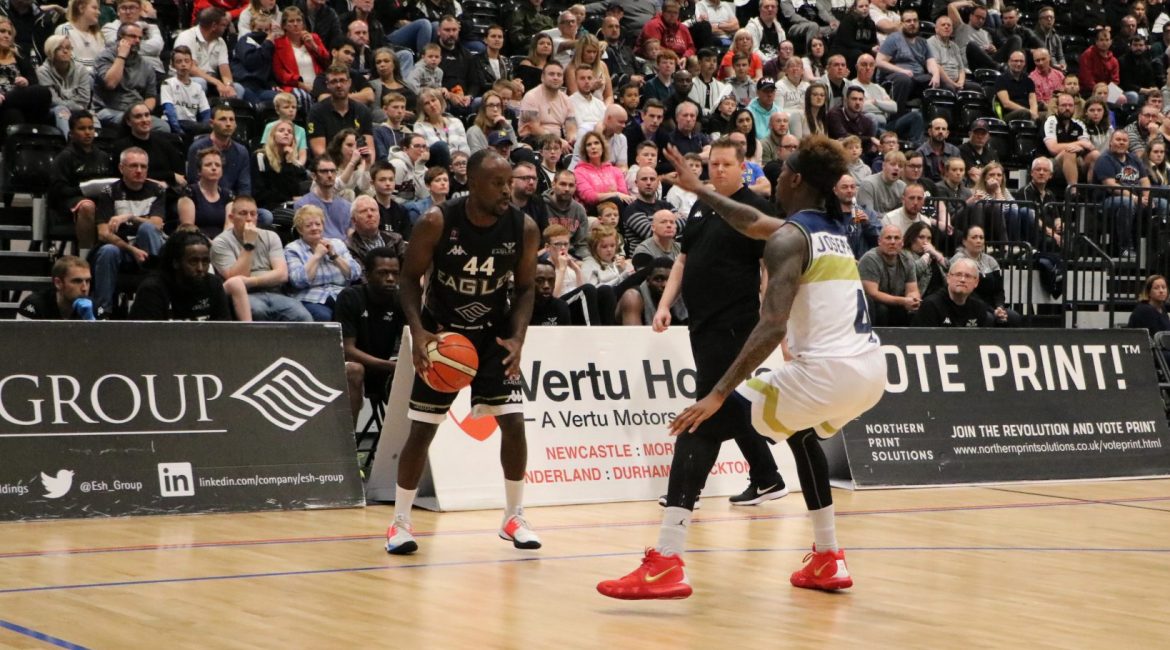 Who better to sum up the preseason fixtures and performances and to look ahead to the opening game of the 2019-20 season than Eagles Captain Rahmon Fletcher? The mercurial point guard and on-court general helped to preview The BBL Cup Group Game against Cheshire.

He started by looking at the preseason games which resulted in two wins and two losses and three games against BBL sides they will face in the coming campaign.

“I think it was good. Preseason is always good for any team that has just come together and gelling. As far as chemistry, camaraderie, getting used to a new coach were concerned I think these preseason games were very, very important.”

“I think the Sheffield game on the road on Sunday was probably more important than any other one because it was a BBL Team on the road and BBL refereeing and it was a little bit of adversity. You see what we have to go against night in and night out.”

“So, it was good for the new guys to see what The BBL is all about, the refereeing and just the way we travel about and stuff like that. All in all, I think preseason was pretty successful for us.”

There was quite a dramatic turnaround though in the last two games where Sheffield overturned a high-scoring loss from Friday in to a tight low-scoring win on the Sunday. Fletcher admitted it was a discussion point.

“It was something we talked about in the locker room after the game. You could tell they’d scouted us going from Friday to Sunday. Something that we didn’t do or felt we needed too because as far as preseason goes, you’re supposed to focus on yourself.”

“That kind of explains why it was a different kind of results and we had John (Mitchell)/ coming in as well. We wanted to test different line-ups. We wanted to see who could go with who, times and scorers within tight types of games, where you might need to run certain types of play. I think that’s why it was different on Sunday from the Friday.”

With the arrival of Mitchell, it means the Eagles are now complete and once the injuries to Sade Hussein and Kai Williams have cleared up, both missed the Sheffield games, the roster should be ready to fly and Fletcher is liking what he is seeing.

“For sure. John brings a different type of energy and aggressiveness which we need especially after losing Fab. He kind of brings that. Not necessarily the same as what Fab brought but as far as aggressiveness, energy, as far as talking as far as rebounding is concerned. It’s something we haven’t had for a long time so it’s good to have him on board.”

With the mixture of seasoned players who understand both the Eagles and The BBL and the new guys coming in does Fletcher as Captain see it as his responsibility to bring it all together?

“I think with the group of guys we have at the moment we don’t need that one voice that has to bring everyone together. My role as a point guard is to keep things in order and you have to be the second coach on the court and do things like that.”

“As far as that goes though with this group of guys I’m not sure we’re going to need that. I get the sense from them all that this is going to be a fun, fun year on and off the court and honestly it’s going to mostly about mental preparation versus physical preparation.”

“Of course, physical preparation is important with the prevention of injuries and stuff like that but the mental game? We have to win that.”

One of the things that ultimately can make a big difference is that the “new” guys coming in may be new to The BBL and the Eagles but none of them is a rookie professional and Fletcher feels that is an important point.

“The BBL is a different league to others in Europe that people might be used to playing in. You have to have some sort of professionalism coming into this league but you can’t expect it to be like any other European league is.”

“Having someone that has some type of professional years under their belts is a plus. Having a rookie coming in who has to get used to being overseas, to be a professional and in The BBL is a tight adjustment for a player. I think it’s a plus that we have players that have already been professionals.”

With that first competitive game on the horizon, Fletcher gave an insight as to how they will step up the intensity this week in training to be ready for Friday night.

“We have to approach it as we will every game with a 100% focus. Of course, it’s going to be different with Ian at the helm versus Fab’s approach. So, it’ll be different types of preparation as far as the week goes.”

“Especially when you have Drew, D and me who know Ian and know the route that he took to get here and how much respect we have for him. It’s just going to snowfall down from us. Because if we resist him and act like we don’t want to listen to him the it just snowballs to the new guys.”

“Because we’ve been here of course and I respect him, Drew respects him and Darius respects him, everyone around here respects him and what he’s done. It gives a different type of feel than if we had a brand-new coach that nobody knows so I’m really happy with the way he’s handling things.”

Looking at Friday’s game it would appear that Cheshire are very similar to the Eagles. Some guys that have BBL experience alongside some new guys coming in and one or two injuries to heal as well. But as always Fletcher feels it’s about looking at ourselves as much as them.

“When it come to the Cup it’s not a regular season game. It does matter because the Cup is huge but with these group games before December it will give us a feel of the league. The importance of a road game, the importance of taking care of home games.”

“It will also give us that wriggle room of not losing the league or getting behind in the league. So, we have to focus on ourselves as much as anything else. We probably know a couple of things about them and them us but we don’t know a great deal about them and the way they’ll play.”

“It’s roughly new teams going back and forth and checking each other. Kind of like preseason in a way but it has more at stake. So, we have to focus on each other and being together. But when it comes to the second time around, we’ll be able to do more scouting and preparation.”

The Eagles do face a tough start as following the Cheshire game they’re on the road to Glasgow less than 48 hours later for the second game in the group series on Sunday. That’s one of the reasons Fletcher thought last weekend was important.

“It goes back to what I was saying earlier. How playing on Friday against Sheffield and then going down to play them again on Sunday we got sort of a feel of what it’s about. It’s the same kind of distance other than we go north instead of south.”

“Different things are going to be at stake so we’ve already seen what it was like to play Friday, recover Saturday and play Sunday so we’ve gotten that under our belts. I’m not saying we 100% no what to expect as playing Glasgow no matter who’s coaching or who’s on the court it will always be a rivalry.”

Back to Friday and Cheshire then. First full home game on the full court with all four stands open and John Mitchell making his home debut. Fletcher is really excited about the game.

“I’m really looking forward to it. We’ve been playing on the practise courts of course in preseason but that’s something we always do. We actually though got a chance last week to practise on the full court and I forgot how long it was and how big it was!”

“I thought I was in pretty good shape and in pretty good condition but it’s just going to be a different atmosphere to have all the bleachers around, the lights up and on, the court out and just get that home feeling going. I’m pretty sure everyone’s excited about it.”

As Captain, as an established Eagle, as the point guard has Fletcher any advice for the new guys coming into the league and their first home game?

“You’ve got to take every possession, every minute of every games as it comes. If you look to far ahead you lose sight of those trap games and you lose sight of what you’ve built up to now. Don’t get too focused on wins and losses.”

“The wins and losses come with progression of how you’re doing individually and as a team. At the end of the day everyone wants to win but that preparation to get a win is going to be huge.”

Talking with Rahmon shows exactly what it means for him to be part of basketball and part of the Eagles. One thing is certain if the rest of his team-mates take notice of what he says and what he does they won’t go far wrong.