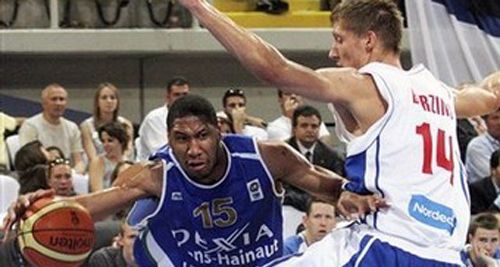 Newcastle Eagles are thrilled to announce the signature of Great Britain captain and former BBL Player Of The Year Andrew Sullivan on a two month deal.

Sullivan makes an exciting return to Newcastle having left in the summer of 2006 for the ACB in Spain where he played for DKV Joventut Badalona, he then switched to Mons in Belgium last season to play for current Team GB coach Chris Finch.

The Londoner joins up with the Eagles team having returned from International duty after skippering Team GB to its historic and ground breaking qualification for the Eurobasket 2009 tournament in Poland.

Having already played a significant part in helping to bring trophies to the club during his two previous seasons between 2004 and 2006 when he averaged almost 20 points per game, the player is looking forward to making a return to BBL action against Guildford Heat in this Friday’s curtain raiser.

“I am so appreciative of the fact that Fab (Flournoy) and Paul (Blake) have respect for me that they are allowing me to come back and play for the team.” explained Sullivan.

“I love Newcastle, the team and the city and it is home for me.”

“I could have gone somewhere else and there were opportunities but this is a great opportunity that is a win-win situation for everyone.”

“I get to play in a situation that is familiar and I get to compete in the BBL again while I see if an offer for Europe is forthcoming.”

“The Eagles get another body on their roster and someone who knows what Fab demands from his players.”

“The fact is that it is only a two month contract shouldn’t take anything away from Eagles or the BBL. I have never been happier than when I was in Newcastle previously.”

Eagles Managing Director Paul Blake meanwhile is naturally delighted to bring the Londoner back to the North-East and believes it is a move that should be welcomed by fans right across the country.

“The unprecedented success of Team GB in qualifying for Eurobasket 2009 in Poland is something we have all celebrated in the last couple of weeks. To actually get the captain of our national team back into the BBL is a great coup, not just for the Eagles but also for the league.”

“The timing couldn’t be better and naturally it is a terrific boost for everyone. The new season is just days away and we have one of the best players to have played in the league in recent times back on the floor.”

“While we know that it is only a temporary arrangement, the fact that Andrew wants to be with us is an honour for the club in many ways because we know his quality and the impact of Team GB accomplishments.”

The move for Sullivan was made possible thanks to financial support from the Metro Radio Arena who have been instrumental in helping bring the Londoner back to his adopted home. Chief Executive Colin Revel explained.

“We are really happy to have helped in bringing one of the biggest favourites in Eagles history back to the Arena. Andrew Sullivan is the kind of quality player that the fans come to see and it’s great that supporters can have the privilege of watching the Team GB captain play in an Eagles vest again. I know he was massively popular the first time round and I think he will be even more popular this time.”