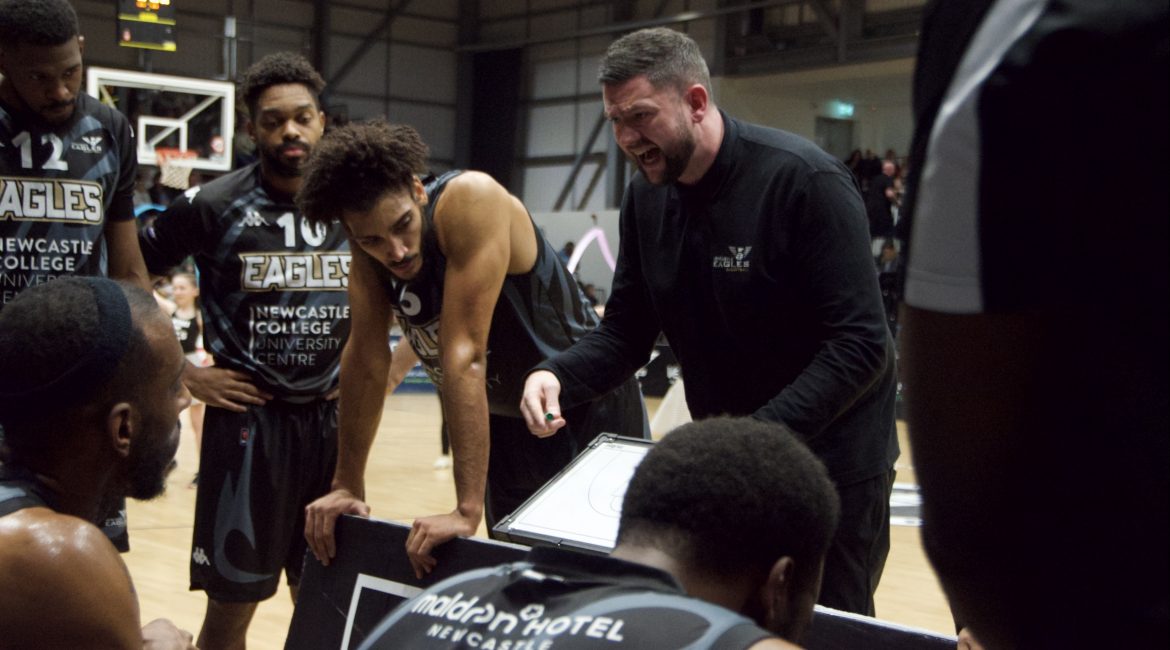 Marc Steutel is doubling down on his determination to transform Newcastle Eagles’ defensive mentality.

Ahead of Saturday’s BBL Cup clash at Leicester Riders, the experienced playcaller is demanding more from his inconsistent roster.

And Steutel conceded his players must learn to balance defensive fundamentals with controlled aggression following a flurry of costly fouls in recent weeks.

“I want this team to become a defensively solid unit and I’m convinced we have the talent to do that,” said the acting Great Britain head coach.

“We’re reworking some of those defensive fundamentals and hammering them home day after day.

“Right now, it’s about simplifying things and ensuring everyone’s on the same page.

“I’m aware that we need to do that quickly and effectively so that we reach a point where every player sees the game the same way.

“I wasn’t happy with our pick-up play against Plymouth last Friday — not at all. There has to be collective defensive responsibility from one thru five.

“We have to build a solid wall defensively and use that as a platform moving forward.

“It was disappointing last week that we just didn’t create that wall consistently.”

Equally disappointing on a frustrating night against the Patriots was yet another early exit for key men Donovan Johnson and Justin Everett.

And the Eagles have now seen one or more players fouled out in each of the club’s last six matches.

“There have been situations where some of the guys have been responsible for fouling out,” agreed Steutel. “I accept that.

“But there have also been situations — and I’ve watched the games back — where I can’t see what our players have done wrong.

“Are those fouls a product of our reputation or are there different points of emphasis this season? These are the questions we have to ask.

“Don’t get me wrong. I don’t want our guys to be ill-disciplined but I do want them to strike the right balance between being the aggressor and playing within the rules of the game.

“I’m trying to develop a defensive brand of basketball at this club and I want my players to create pressure.

“It’s a balancing act and I’m well aware of that.”

Johnson is averaging 4.8 fouls every 18 minutes following his return to the BBL but Steutel is refusing to press the panic button where one of his strongest inside players is concerned.

And he pointed to Jermel Kennedy as an example of a veteran star successfully managing the difficult balancing act between aggression and in-game awareness.

The former Worcester favourite returned to the UK this summer following a five-year absence from the BBL.

And after fouling out against Sheffield Sharks last month, Kennedy has stayed the right side of league officials ever since.

“He really embodies how I want us to do our job defensively,” explained Steutel.

“I’m really proud of Jermel and how he’s adapted to this team and become increasingly influential.

“He’s a leader and he wants to be a winner. That’s who he is.

“Jermel is a very experienced player who I always believed could add a lot to this team.

“He’s not naturally the most vocal of players but it’s something he’s working on and something I need from him.

“Jermel is a veteran with a high basketball IQ and he’s embraced the leadership role that I’ve asked him to take on.

“Like all of us he’s not happy with the way results have gone but he’s doing everything in his power — on and off the court — to fix things for this team.”

Newcastle take on old foes Leicester in the East Midlands this weekend as clear underdogs in a traditionally feisty affair.

But Steutel insisted: “It’s a game we need.

“We’re going down there to take a swing at the defending league champions and to do our very best.

“It’s my job to make the players aware of Newcastle’s proud history in the BBL Cup and of our rivalry with the Riders.”