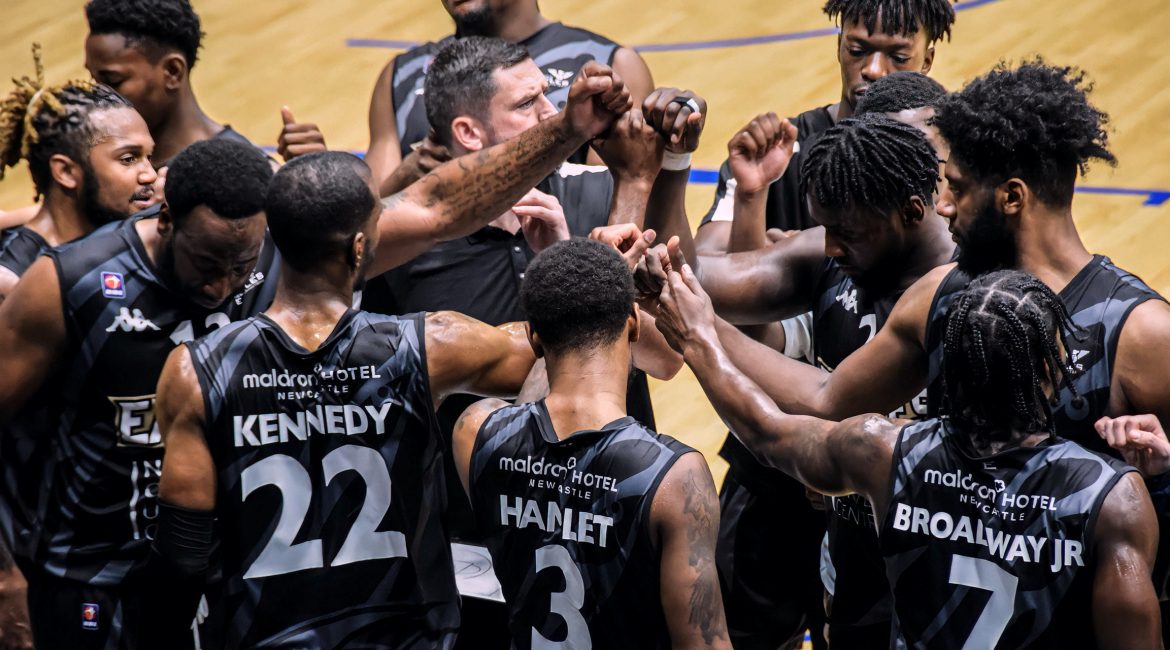 Marc Steutel can’t wait to shape his new-look Newcastle Eagles after admitting he’s buzzing on the back of a busy summer of transfer business.

But the club’s new head coach insisted he’s not done yet with a number of big names still in the mix ahead of this month’s hotly anticipated BBL tip off.

Newcastle took plenty of positives from last night’s behind-closed-doors scrimmage with Surrey Scorchers and the two teams will lock horns again in front of fans tonight.

And Steutel’s confidence in his new roster was confirmed after the Great Britain assistant flew in from Milan in time to take charge of his remodelled side’s first run-out at the Vertu Motors Arena.

“I’m delighted with the business that we’ve done so far,” said Steutel, who has added seven new faces to crowd favourites Darius Defoe and Sauveur Kande.

“It’s been a bit of a reboot this summer but that’s the direction that we wanted to go in.

“I’m really, really pleased with the quality of the players and the strength of the characters that we’ve signed.

“We look very carefully at the player and the person before we make a decision and I’m confident we’ve made the right choices for this club.

“I wanted to sign players who were prepared to play the right way and with the right values.

“That’s the group that we’ve put together and I’m looking forward to seeing them bring that vision to life.”

Newcastle took the decision to play last night’s practice match behind closed doors as a mark of respect to the Royal Family, following the passing of Her Royal Highness Queen Elizabeth II on Thursday.

But supporters will be welcomed back to the Vertu Motors Arena tonight and tickets for Friday’s match will be accepted on the door.

“There were a lot of good things out there and, of course, several areas for improvement.

“Importantly, all of the guys got a good run out and nobody picked up any niggles or knocks.

“It will be good to do it all again against a talented Surrey side and to see where we can get better.”

Steutel arrived back on Tyneside yesterday afternoon following a week with the GB senior squad at Eurobasket.

And the new man at Newcastle’s helm stepped through the Vertu Motors Arena doors to discover a roster determined to capitalise on a five-game pre-season programme.

“I was in touch with assistant coach Stronach every day while I was away and from what he tells me the new guys are settling in just fine,” added Steutel.

“It’s not been an ideal situation for anyone with my GB commitments meaning I haven’t been able to take part in practice.

“But I always said I’d answer the call for my country and credit to Gary and the club — they’ve made the bedding in period as seamless as possible for the new players.

“This weekend is all about learning, evaluation and looking at the bigger picture.

“I’m taking a holistic approach to this role and ensuring that there’s a strong pathway between BBL, NBL, BUCS and Academy basketball in the city.

“There will be opportunities for younger players to practice with the senior guys and to make their mark but we’re also looking at what else is out there.

“The BBL roster isn’t complete but it gets back to what I’ve always said — we have to find the right player and the right person before we add to this group.”

Tickets for tonight’s pre-season tip-off are still available from the box office and on the door.