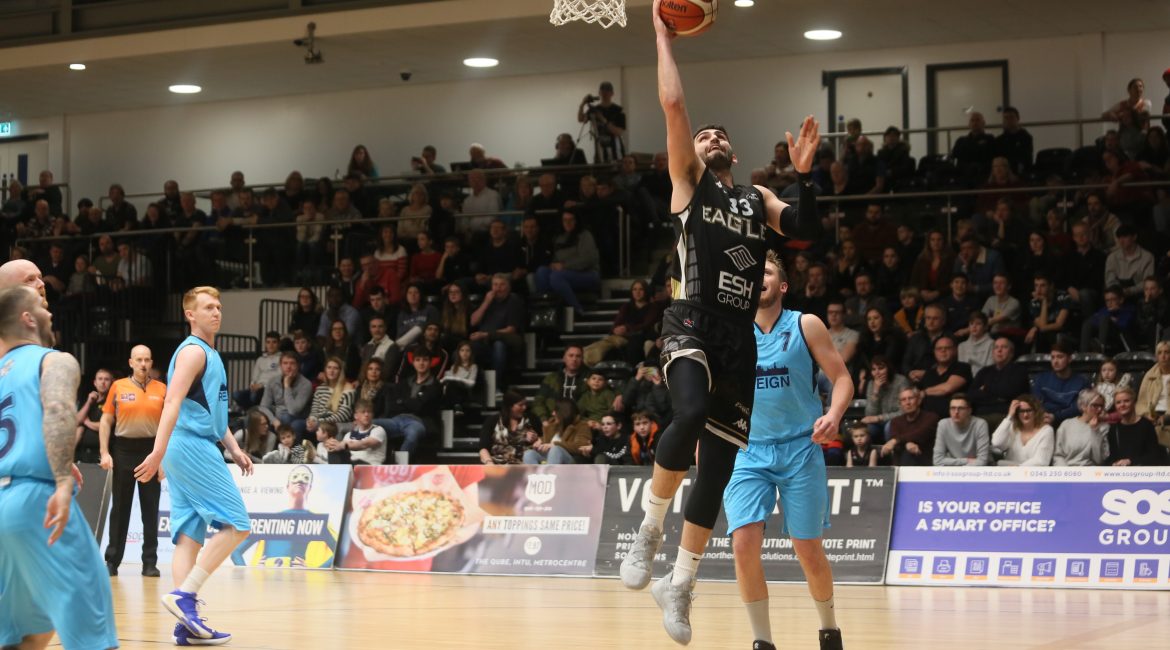 As Newcastle Eagles begin to prepare to travel this weekend to Surrey for a tough road game on Saturday night, former Scorchers player Nick Schlitzer gave his thoughts on that game and also last weekend’s huge BBL trophy win over Dunfermline.

Without the injured Mike Morsell and Sade Aded Hussein for the Dunfermline game it gave Schlitzer the chance to step off the bench and show exactly why Newcastle brought him to the Eagles.

And show why was done in considerable style as his 30 points, 10 rebounds and 10 assists triple-double helped his side to a stunning 133 – 61 victory and earned Schlitzer a place in The BBL’s Team of the Week alongside his teammate C.J. Gettys.

“It was good to get a win and good to advance and some of the other guys got extra minutes which is always good for the team to mix things up a little bit and get some guys a little more confidence, so it was a good win.”

“I was one of those that got a little extra minutes and I just tried to produce, be aggressive and it seemed to work. It’s my first triple-double as a professional so that’s kind of cool too.”

Eagles had been expected to win comfortably and so it proved but there’s still no denying that the put in an efficient, effective professional team performance on the night.

“We came out and handled our business. We didn’t have a ton of information on the opposition but we knew if we just came out and focused on ourselves, played hard and played together we’d be alright and that’s what happened.”

Further good news for the Eagles this week confirmed the red-hot start that Gettys has made in Eagles colours as he’s flown through the month so effectively that he’s won The BBL Player of the Month award for December.

A timely boost for Newcastle as they prepare to face Schlitzer’s previous BBL team Surrey. Schlitzer is well aware of the danger Scorchers prevent and how tough a game it will be. He is though looking forward to his return.

“It’s going to be interesting to go back down there and see some people I haven’t seen in a while and it’ll be nice. They’re on a roll with three recent wins. We’ll need to get a good week of practice in if we’re going to go down there and get a win. It’ll be tough.”

Surprisingly though Surrey lost their home BBL Trophy game against London City Royals on Sunday to end their recent good run but it means they can really focus in now on their Championship challenge and look to bounce back this weekend.

“They have a good environment down there and they always play good in front of their own crowd so it’s going to be tough. We’ve got to go in expecting nothing less. Hopefully we’ll have all our guys back for Saturday’s game which will help.”

“It was good that the guys stepped up on Friday after losing Mike and Sade and that’s good for the team. But I think more than likely they’ll be good and ready for Saturday.”

Despite perhaps not playing as many minutes as he’d like so far this season, Schlitzer certainly threw his hat in the ring with his performance last Friday night and has no regrets about the move to Newcastle.

“It’s a great environment here for the home games and Newcastle’s a really neat city with so much to do. I’m really enjoying it here so far.”

Tickets to follow our Eagles on the road to Surrey and sit with our fans behind the team bench are available to book through our box office.