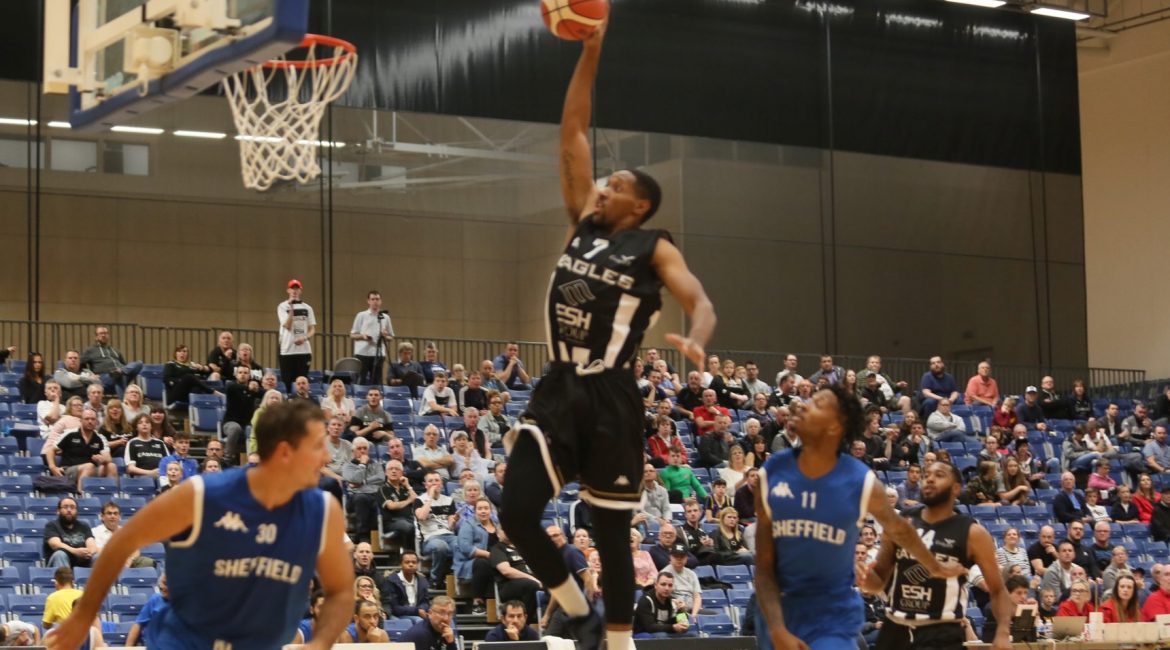 If pre-season is about improving, learning and working together then Esh Group Eagles Newcastle must be happy with their final outing before the regular season begins.

After going down by 13 points in Sheffield last Friday, Fab Flournoy’s men turned that around despite still being without the injured Kai Williams and Drew Lasker and facing a full-strength Sharks outfit.

The Eagles were sporting their 2018/19 uniforms for the first time and have gone back to a retro design showcasing the famous black and white stripes associated with the City for so long. It was a smart move as the players seemed to pick up on the theme and show real solidarity from the start.

Defensively as good as they’ve been in the five pre-season games they restricted Sheffield to 75 points and turned that defence in to positive offence scoring well across the roster as they thrilled the home fans picking up their second home win in 48 hours.

On Friday it had been the first five minutes that had been Newcastle’s downfall but last night they were focused from the start and played with real intent from the off. New power forward Victor Moses certainly won the fans over early with some powerful inside baskets to help that start.

Moses would go on to top score for his side adding ten rebounds for an impressive double-double showing just why The Eagles coaching staff brought him to Newcastle. Young rookie shooting guard Kyle Williams, a real bundle of energy, also showed excellent scoring prowess.

Add in a solid effort too from new American guard Ahmad Thomas who had 14-ponts and it’s clear to see that improvement has been made across the roster as pre-season has unfolded.

Captain Darius Defoe was his usual solid self as well and coming from the bench may well be a new role for him with Moses in the side. However, all that will have to be assessed and worked out before Cheshire Phoenix come to town next Friday for the opening BBL game of the season.

Eagles though did have to come from behind as Sheffield came back strong in the first to take a one-point lead but from then on it was Eagles all the way as they pulled away in the second and third quarters to register an impressive win by the final buzzer.