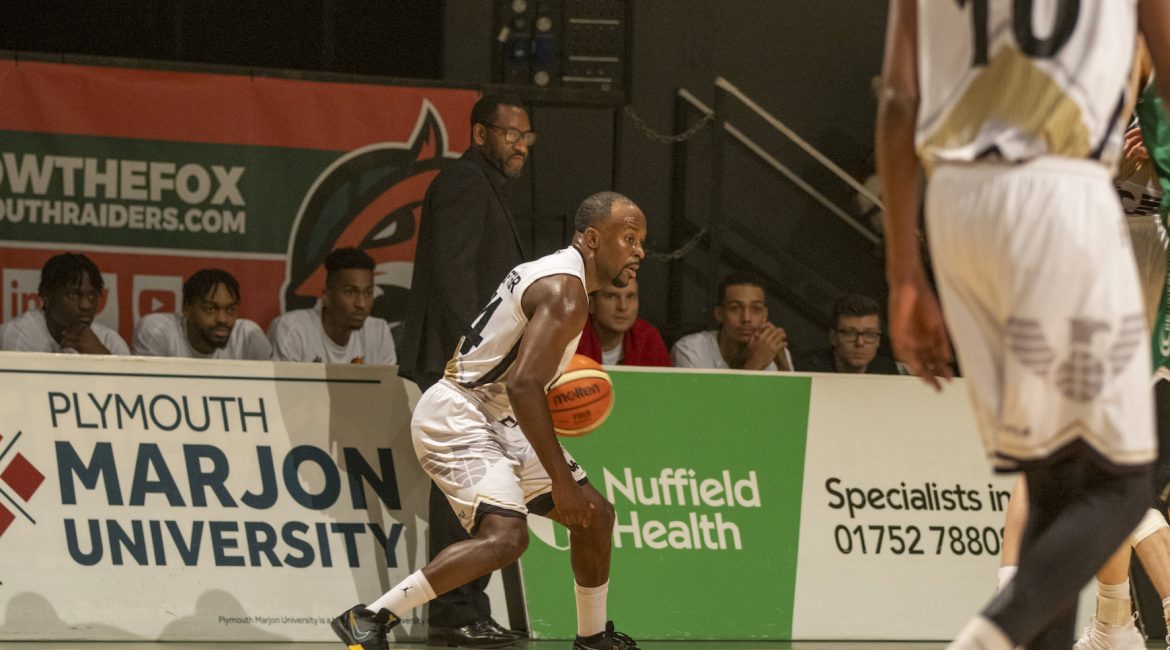 An incredible game of basketball down in Plymouth yesterday afternoon saw Newcastle Eagles take a tough road victory to open their BBL Championship campaign. In a proverbial game of two halves, Newcastle held off a late Raiders charge to take a deserved win.

It was also Coach Ian MacLeod’s first official league game and win at the helm and he was probably a very relieved man at the final buzzer. He had talked in the build-up to the first Championship game about how no game in the BBL was easy and his words proved prophetic.

However, after a scintillating first half by his charges he may have been seen to eat his words as Newcastle stamped their authority on the game from the off. New signing CJ Gettys was quickly off the mark and dominating in the paint in the early going.

With Captain Rahmon Fletcher inevitably pulling the strings and free-scoring Mike Morsell hitting his shots  early it looked as if Newcastle were going to run away with things. Not only was their offence explosive, their defence was also looking mean.

A massive 30 points came in the first quarter and 27 more followed in the second. But equally important was the job done at the other end as they restricted Plymouth time and time again. It meant a massive 57 – 34 lead at the half with the game seemingly over.

Perhaps the effort of that first half took its toll. Maybe it had seemed a little too easy at times and Newcastle relaxed a little too much? Whatever was said in either locker room at the half certainly gave us an incredible turnaround in the second twenty minutes.

The Newcastle defence simply subsided in that time period. The home side led by point guard Josh Wilcher and a much-improved second half performance by big man Rashad Hassan simply scored at will as the Eagles conceded an incredible 69 points in the final two quarters.

The one thing that kept MacLeod’s men in the game and in front though was their ability to score consistently especially with their big three being very strong. Drew Lasker on his old stomping ground also gave valuable support and ended the game in double digits.

Deep in to the third quarter the visitors still looked comfortable as they led by as many as 26 points but that was when the home side fired up all guns and began cutting savagely into the Newcastle lead.

They got it down to 14 points with just the last quarter to play and continued that momentum as time ticked down. Fletcher kept his side in front mostly from the charity strip and had been perfect from his first fourteen visits to that line.

When, though, he missed a pair late on, it gave the rampant Raiders a chance to bring themselves to within four points on a couple of occasions but finally the Eagles defence held firm.

As the clock ticked down a Morsell floater right on the buzzer of the 24-second shot clock gave them their final breathing space putting them up by eight and finally seeing off the Plymouth charge.

A win on the road is always an excellent effort and there’s no doubting the sparkling basketball that Newcastle played in the first half gave them an edge. The defensive lapses in the second half almost caused them to lose that edge but they held on thanks to their scoring power.

Our Eagles have a packed schedule of home games through the Christmas and New Year period, which are on sale now: