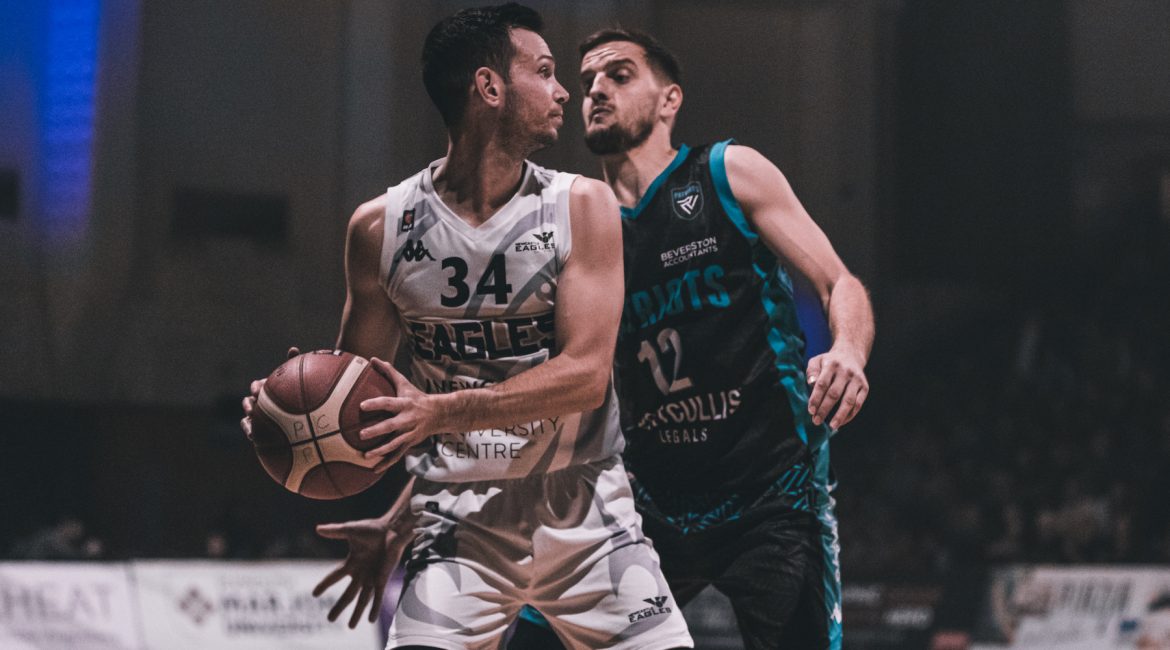 At the fourth time of asking in the fledgling BBL season, Marc Steutel’s Newcastle Eagles took the first win of the new Coach’s tenure and advanced to the quarter-finals of The BBL Cup.

Whether Steutel would have preferred a win in the league will be a question only he can answer but what is certain is that win’s breed confidence and he’ll be pleased to advance to the next round of The BBL Cup.

Watch highlights of Eagles at Patriots:

It’s also a win on the road in a venue where it’s notoriously difficult to get an away victory and will set Steutel’s side up for their next BBL Championship fixture in front of the Sky Sports cameras this Friday at Sheffield Sharks.

The Eagles still awaiting the arrival of new American forward Donovan Johnson ran essentially the same seven man roster that had put in an great effort against the powerful London Lions in defeat on the Friday night.

Patriots were also a key man down in Antonio Williams but had the home court advantage and a relatively short trip home from their loss at Bristol on Friday night.

Whether those factors played a part in the Eagles slow start to the game is debatable but they did find themselves 9 – 1 before they shook off the lethargy and found energy from beyond the arc.

Point guard David Cohn found his range from 3-point range knocking down two and with Ben Mockford making another, Newcastle got back into the game. Cohn’s third triple of the first quarter gave the visiting side their first lead of the game at 19 – 18.

Lesley Varner’s two free-throws late in the period meant they retained that lead as they went into the second ten minutes of basketball and what a tight, tense affair that was. The two teams traded baskets throughout the second and there was never more than three points in the contest.

That was until with the scores tied at 39 – 39 Javion Hamlet and Cohn made two point plays for the Eagles to edge them in front as they took those four points to give them a lead as the sides headed for the locker rooms.

Plymouth opened the second half in the ascendency as they levelled the game and then went up by five points much to the delight of the home fans. But Newcastle rallied, shut the Patriots down and the crowd up as yet another Cohn triple gave them back the lead.

The Eagles also had one more surprise trick up their sleeve as back to back triples, the first from the energetic and hard-working Jermel Kennedy and the second a very rare long-range bomb from veteran Darius Defoe meant Newcastle led 68 – 62 going into the final period.

Eagles netted the first point of the fourth to lead by seven but an 8 – 0 Patriots run coupled with great defence turned the game in their favour as they led by a single point and had restricted Newcastle to only six points of their own.

But then cometh the hour, cometh the man and a deuce followed by a single free-throw with ten seconds left from Defoe saw Newcastle home in a frantic but satisfactory finish. One of the keys to the win was that Eagles were 11 of 21 from beyond the arc with Cohn in particular impressive with 5 of 8.

After the game Steutel who was delighted with the result had this to say.

“I thought we weathered the storm on a few occasions. We did a great job of moving the ball and making extra passes to get good looks for our shooters and did a good job of shooting the ball from the 3-point line.”

“I thought for the most part we tried to guard their personnel in the right kind of way. So I’m really pleased. It was a tough gritty win on the road. I think defensively were showing what we can do well but there are still a few areas of our game to work on as we look towards the Sheffield game.”