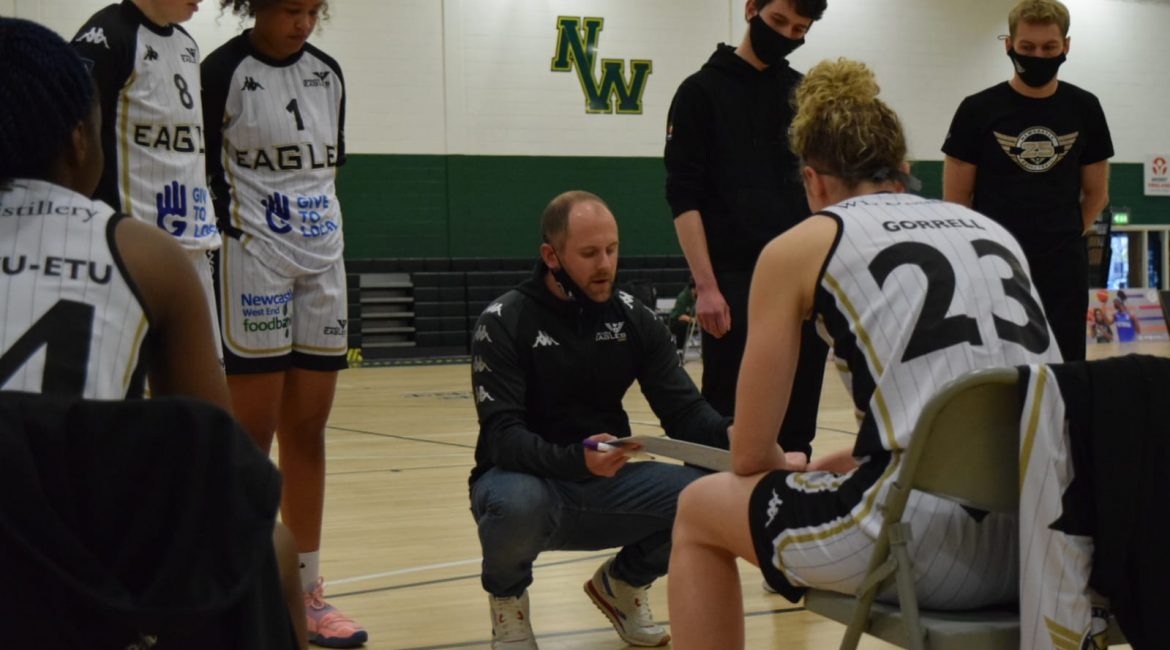 Frustrated Chris Bunten is calling for greater consistency and fewer lapses in concentration as Newcastle Eagles WBBL prepare for next weekend’s tilt at playoff glory.

The women in black host Manchester Mystics this afternoon in a winnable final fixture of the regular season.

And Bunten must hope that the momentum gained from a much-improved second half display against Nottingham yesterday sparks a confidence-boosting win.

“The Wildcats played pretty well but we played the kind of game that allowed them to do that,” said Newcastle’s playcaller.

“Defensively we were poor and they scored 24 points off 19 turnovers.

“We fought back — as we often do — after the break and that’s credit to the players.

“We just have too many lapses in concentration and there’s not enough consistency.

“Having said that, I can still take positives from the second half performance and that has to be our starting point against Manchester.”

Newcastle trounced Nottingham on Tyneside last month and the visitors won yesterday’s second half in the East Midlands 48-44.

But the damage was done during a sub-standard second period which allowed the Wildcats to open up a 41-26 first half lead.

The Eagles cut the final quarter deficit to single figures several times during a combative finale but it was too little, too late.

And although Ali Gorrell (21) Maddy McVicar and Abby Lowe (both 19) all scored heavily after the break, Bunten’s key players went missing for 10 minutes before half-time.

With the club’s playoff position secured — and homecourt advantage guaranteed ahead of May Madness — Newcastle faced Nottingham with nothing to lose.

But consistency is the key for the Eagles heading towards the post-season and next weekend’s one-off quarter-final tie at the Vertu Motors Arena.

And Bunten must have hoped for better from his unusually ragged roster as a fluctuating first half was finally settled in the Wildcats’ favour.

Newcastle did well to recover from a 9-0 first period deficit to take an 18-15 lead into the quarter break.

But another slow start allowed the hosts to open up a 15-point advantage at the half.

Had it not been for a slew of three-pointers within the opening 10 minutes then the Eagles would have been nowhere near Nottingham early on.

Lowe, Ori Chukwu-Etu and Rachael Bland all found their range from beyond the arc during a free-flowing first period.

And a Gorrell two on the buzzer opened up an unlikely three-point lead for the visitors.

But the momentum gained from a stunning 18-6 tear was quickly lost as the Wildcats turned the screw.

Newcastle’s defence went missing as Kenrick Liburd’s side piled on the points following the restart.

And the hosts — missing injured forward Jasmine Joyner — outscored Bunten’s side 26-8 during a one-sided second period.

Neither Gorrell nor McVicar had been able to make an impression at the offensive end with the normally prolific backcourt duo converting a combined four from 21 of their first half field goal attempts.

But 10 turnovers in the first 20 minutes hardly helped the Eagles’ cause with poor ball retention leading to 14 Wildcats points in transition.

And Bunten had it all to do if he was going to change Newcastle’s fortunes ahead of this afternoon’s clash against Manchester.

As the second half got underway, another well-timed Bland triple saw the veteran guard move to double digits and keep the Wildcats within touching distance.

But Simone Costa and Chelsey Shumpert were keeping the scoreboard ticking over at the other end to stifle any Eagles fightback.

McVicar finally sparked into life during a competitive third period and back-to-back threes saw the WBBL rookie move to 17 personal.

Gorrell, meanwhile, was struggling to break free from the Nottingham double team but a typically abrasive drive to the basket inside the final two minutes of the quarter created an and-one play.

And Newcastle’s skipper coolly converted the bonus shot to reduce the deficit to single figures.

It was the spark Gorrell needed to explode in the latter stages but even the WBBL’s leading scorer couldn’t snatch victory from the jaws of defeat.