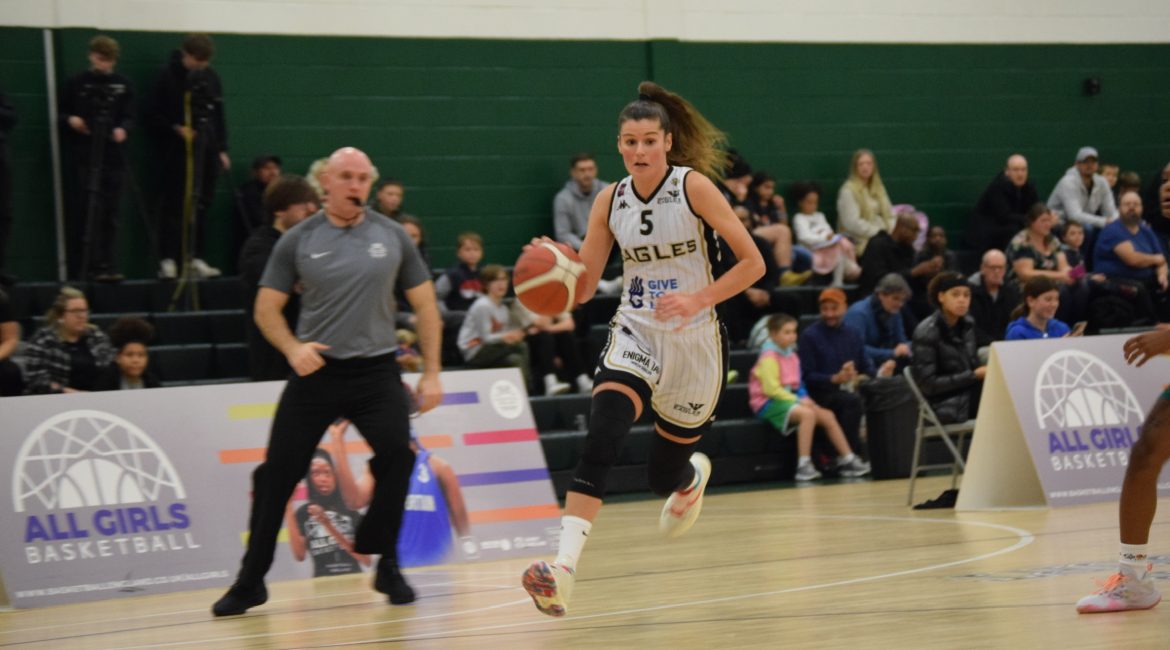 In-form Newcastle Eagles made it three wins on the bounce at Nottingham Wildcats last night to increase the pressure on the WBBL’s top four.

Chris Bunten’s side warmed up for Saturday’s visit of unbeaten league leaders London Lions with a gutsy display in the East Midlands.

And it was a masterclass in perimeter shooting from Jessica Eadsforth-Yates that underpinned a nerveless Newcastle win.

The British guard’s 22 points included a staggering six three-pointers as the visitors closed out a deserved 64-62 victory.

But star-studded London will prove a far tougher test on Tyneside next weekend when the Lions visit the Vertu Motors Arena for the first time this season.

Maddy McVicar was the surprise name on the Newcastle team sheet after head coach Bunten had ruled out his US guard just 48 hours earlier.

The proven playmaker wasn’t named in the Eagles’ starting five as she continues to nurture a painful ankle knock.

But the game was only 100 seconds old when McVicar, who ultimately managed a 16-minute cameo, was ordered off the bench with her team trailing 6-3.

And Bunten’s evolving side was more than a match for the under-pressure hosts as they took a 20-17 lead into the second period.

Former Wildcat Chloe Gaynor had dominated under the glass with five quick boards against her old club.

And seven Eagles were on the scoreboard within the opening 10 minutes as Bunten rotated his roster to excellent effect.

Newcastle could — and should — have gone on to open up a big lead before the half-time break.

But not for the first time this season the women in black were profligate in possession.

Bunten couldn’t hide his frustration as the Eagles failed to take care of the basketball in the face of an increasingly focused forecourt press.

And back-to-back steals sparked a 10-3 Nottingham tear as Kenrick Liburd’s side levelled the scores at 32-32.

To their credit Newcastle did bounce back to take a four-point half-time lead into the locker room.

But Eadsforth-Yates’ Eagles-high 11 was tempered by three personal fouls called on the explosive guard.

And Bunten’s side needed to find a way to limit the threat of Brooklyn Pannell, who added four assists and three boards to her 14 first half points.

But Eadsforth-Yates got hot again to hit three-successive triples and fire her team 48-44 up.

Newcastle maintained their four-point lead heading into the final period but the scores were locked at 54 apiece with seven-and-a-half minutes remaining.

And a hugely competitive clash was on a knife edge as two top four hopefuls looked to close out the game down the stretch.

Ebony Horton, who supported Eadsforth-Yates with 11 points, five rebounds and three assists, missed a two-point jump shot with six seconds on the clock.

But Nottingham’s Imani Whittington rimmed out with a last-gasp three-pointer to hand the Eagles their most significant win of the season so far.