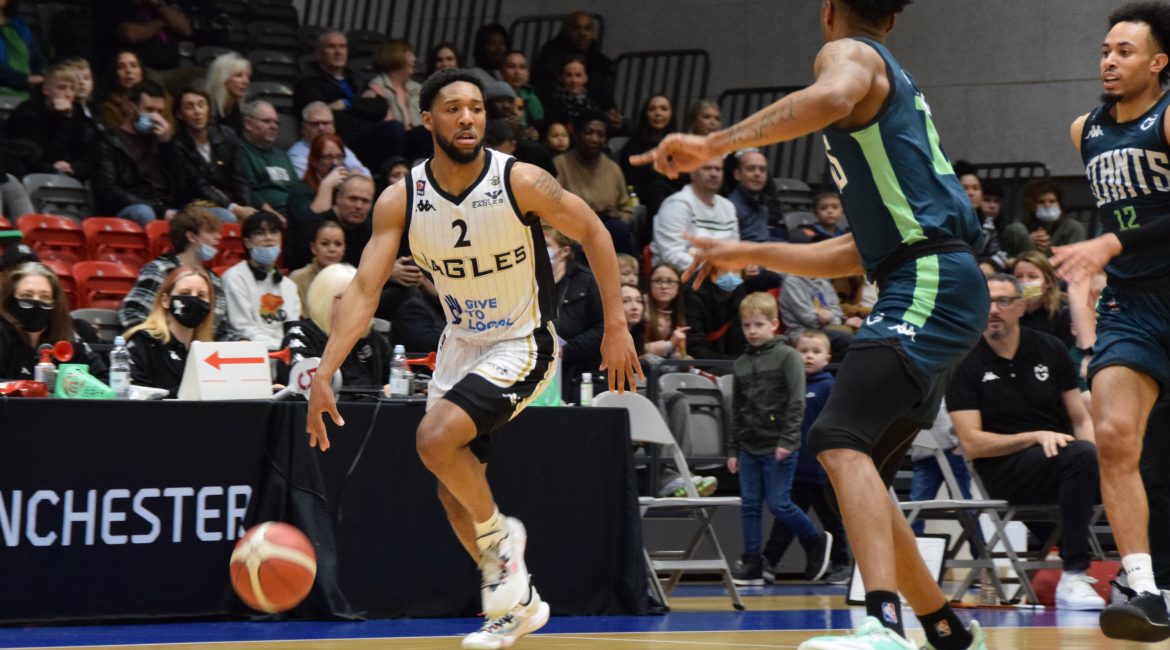 Not the happy start to the New Year that the Newcastle Eagles were hoping for as they went down to a close defeat on the road in Manchester last night. It now means the Eagles are on a four-match losing streak as they continue to be unable to find a winning formula.

In essence even with a lot of basketball still to be played they can certainly write off any chance they may have had of winning the BBL Championship. Going forward it needs to be a concentrated effort to right the wrongs and get back into the groove to make a run at the play-offs.

There is of course the minor matter of the BBL Trophy still to play for as well and that will be Newcastle’s next game on the 14th of this month when London Lions will arrive at the Vertu Motor Arena. That is looking like a huge game and another tough test for an Eagles side lacking in confidence.

The tale of the tape didn’t show much difference in the two team’s final statistics apart from in one area which crucially made the difference in the end. Newcastle were out rebounded 49 to 33 and only had two second chance points and three offensive boards.

Manchester on the other hand had sixteen offensive which they turned into sixteen second chance points outscoring Newcastle by ten points in the paint. It was where the difference counted in a game where the home side perhaps had slightly more depth than the visitors.

After losing against Cheshire at home in between Christmas and New Year there was talk around the Newcastle camp about making a better start to the game and throwing the first punch. That was at least something they managed to do in the first of four fiercely contested quarters.

With the Giants leading 5 – 4, Newcastle buoyed by triples from Corey Johnson and Kyle Williams had a 10 – 0 run that gave then their biggest lead of the night by nine points. Manchester though are a tough side and bounced back well to regain the lead.

It looked like being a level first ten-minute period until Johnson hit another triple for the visitors to give them a three-point advantage. That was doubled as the second period began when Rahmon Fletcher hit from outside.

The Eagles were contesting the game in fighting style and midway through the second still held that six-point lead. But ex-Eagle Will Saunders came off the bench to hit a couple of triples and with Dan Clark dominating inside gradually the home side worked their way back into the lead.

It took two free-throws from Wes Person Jr. as the half expired to send the teams into the locker rooms tied at forty points each.

The third quarter was a battle royale with the home team’s point guard Tyrik Armstrong threatening to take the game over as he poured in fourteen points in the ten-minute stretch. But Newcastle stayed with him and limited the damage with a determined effort.

It meant that the game went into the final quarter with Giants ahead by only four at 67 – 63. However, an 11 – 3 run to start that last ten minutes saw them increase the gap to its first double-digit difference and left Newcastle with work to do.

The Eagles though showed resilience and fighting spirit and managed to get back to within two as the game entered the final stages. Manchester though held on with the GB Captain Clark inspiring his team to a hard-fought victory that sees them sitting second in the BBL table.

For Coach Ian MacLeod and his players it was a second tough loss in a week and at the moment this side that is brim full of talent is not quite finding a way to use that ability and stop a losing run.