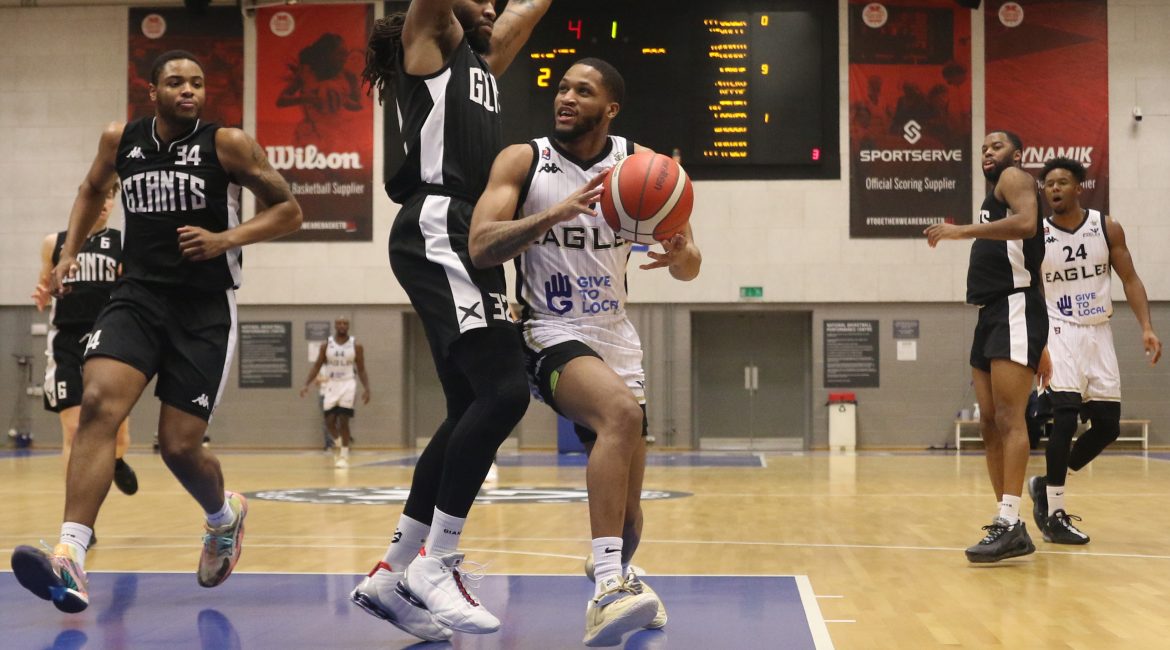 Ian MacLeod’s Giants slayers warmed up for a big week of BBL basketball in fine style as early-season pacesetters Manchester were put to the sword.

Newcastle Eagles bounced back from a painful one-point defeat at Plymouth with a thoroughly professional performance on the road.

And Wednesday’s BBL Cup quarter-final against Bristol Flyers can’t come soon enough for a roster back to full strength and back to its best.

Justin Gordon led all scorers with 28 points on a night when Newcastle dominated from start to finish.

Season Tickets Renewal Deadline Extended To End of June
May 13, 2022

The first of four games in eight days saw MacLeod’s men up against a Manchester side flying high following the Giants’ best start to a BBL season since 2012.

Worcester Wolves asked some serious questions of a roster in transition.

And the Eagles came out determined to test the mettle of a young and talented team being talked about as future title contenders.

A fast-paced start from the men in black caught Manchester cold with Gordon racing to 11 first quarter points.

Prior to tip Newcastle’s rookie forward had talked about the need to make some shots following the previous weekend’s offensive horror show at Plymouth.

And the all-action American led by example to drop the visitors’ first three of the game and follow up with an eye-catching dunk to open up a five-point Eagles’ lead.

The return of Rex Pflueger midway through the opening period was a welcome sight for Newcastle fans keen to see the newly-capped GB international back in action.

And the Notre Dame graduate was joined on court by fit again Eddie Matthew — the former Morpeth junior making an immediate impression on the fast break.

The Eagles led 27-20 heading into the second period with Gordon and captain Rahmon Fletcher combining for 21 points.

But the Giants looked like a different team following the quarter break as Danny Byrne’s men started to gain a foothold in the game.

And an Alex Quandie dunk reduced the deficit to two points with Newcastle paying the price for a series of uncharacteristic handling errors.

Pflueger helped steady the ship with some great work in the paint before stepping outside to drop an arcing three.

And the Eagles managed to hold on to a 44-40 lead at the half on the back of Gordon’s game high 17 points.

Newcastle’s star man had converted seven of his eight first half field goals as he embarked on a personal mission to put right the previous Sunday’s wrongs.

And Gordon added another classy two as MacLeod’s men started the second half on fire – scoring the first 11 points of the third period to open up a 55-42 lead.

Playmaker Fletcher served up a deliciously deft pass inside to create the alley-oop opportunity for Edwards before Evan Maxwell got in on the act with a looping triple.

Suddenly the Eagles were swarming all over their less experienced rivals but Giants’ Lyle Hexom and Breaon Brady remained a threat in the paint.

And keeping the feisty forwards quiet down the stretch would be key to closing out an invaluable win on the road.

But Newcastle had a 15-point cushion heading into the fourth quarter and never looked in danger of letting a commanding lead slip.

And a comfortable victory proved to be the perfect start to a testing examination of the Eagles’ physical and mental strength in the run up to Christmas.