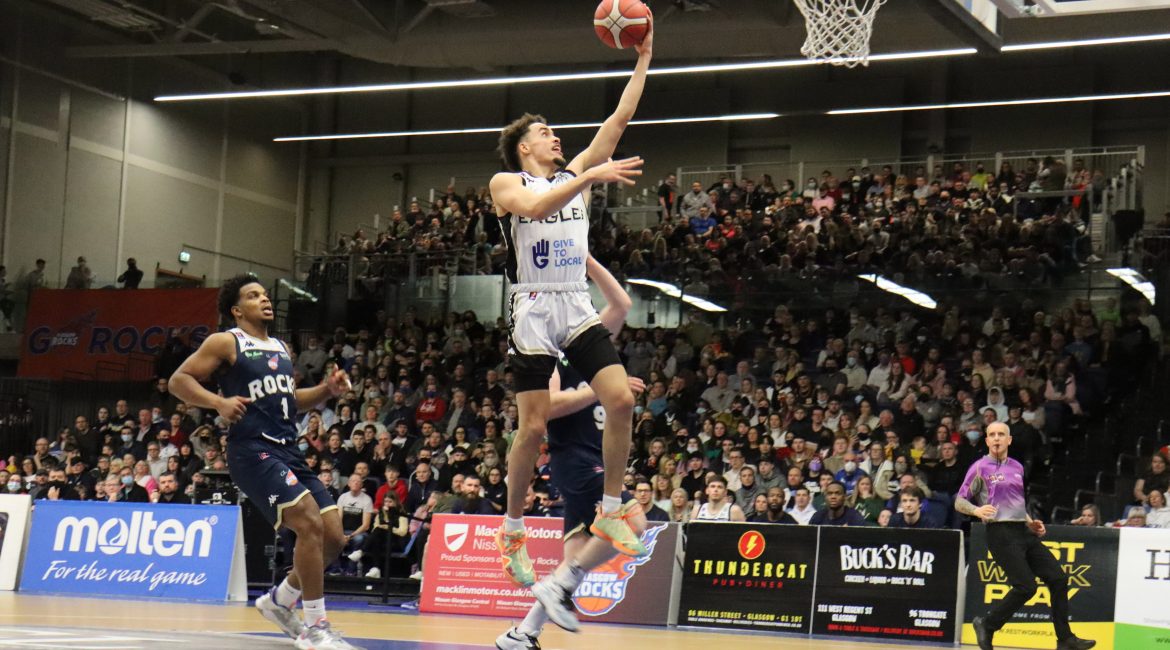 Whisper it quietly but the Newcastle Eagles may just be on the point of finding an identity and turning their season around.

Another solid all-round team performance with the starting five all getting into double figures and Justin Gordon adding his from the bench.

Watch the full highlights of Eagles at Glasgow Rocks:

Wes Person Jr recorded back-to-back twenty point games over the weekend to help his side do the same win-wise. With Rahmon Fletcher continually directing the traffic and the inside presence of Brandon Peel and Darius Defoe creating space it looks a more potent Eagles side.

Add in the work done by Corey Johnson outside and inside and the athletic presence of Gordon and all of a sudden this Newcastle side looks to be on the brink of fulfilling their on-paper potential on the hardwood.

Rocks actually opened the scoring but that was the only time they led in the game and once the Eagles got in front they led all the way to the final buzzer with the closest the home side getting to their visitor’s being the six-point final score line.

At one point early in the second quarter the Eagles had led by as many as twenty-two. Rocks stayed dogged though and when Jordan Harris got hot in the second half to add to the fireworks being supplied by Jonny Bunyan they threatened a come-back.

But Newcastle always just had enough in the arsenal to keep Glasgow at bay and in the end, despite one or two defensive lapses, were good value for an excellent road win.

After Fletcher and Bunyan exchanged triples early-on to tie the game at five points each it was Newcastle who made the first run. A 12 – 2 run where Person Jr got going and his teammates responded suddenly had them up for the first time by double digits.

Bunyan responded by dropping two deuces in a row but the Eagles were not going to be denied. With Justin Gordon coming into the game, Person Jr in the groove and Fletcher pulling the strings they pulled away again and with Glasgow twelve points down the hosts called time.

The tactical talk made little difference as Newcastle continued shooting the lights out with a Louis Sayers triple dropping to increase the lead to nineteen. Bunyan tripled again but Kyle Williams finished the quarter with a bucket and Eagles led 39 – 21.

Glasgow introduced the far-from fully fit Alastair Fraser from the bench to try and inject some impetus and he scored two quick baskets inside giving Eagles a problem that Head Coach Ian MacLeod asked for a tactical break to talk it over.

His team responded to his calling and scored seven straight to take a twenty-two point lead at 49 – 27. Rocks though didn’t crumble and with Fraser continuing to rise above his pain forced their way back into the game with eleven unanswered.in eleven.

MacLeod called another time-out and again his players answered his call. Person Jr. netting twice to take the lead back to fifteen. Once again though Rocks rallied.

They finished the half in style with two more Bunyan triples finishing off a 11 – 2 run to the buzzer to make it 49 – 55. It had been all Newcastle in the first period with their blistering opening but Rocks came back well in the second.

The second twenty minutes came out in the end exactly even though there were runs at both ends. Mainly the Eagles forging back into double-digit leads and then the Rocks cutting in to single figures on more than one occasion.

The third went the way of Newcastle by four points and the final ten minutes to Glasgow by the same margin. The Eagles in both the third and fourth periods managed to get a decent lead only for Glasgow to haul it back but it never felt as though Newcastle weren’t going to come out on top and in the end so it proved.

The two sides will dust themselves down, analyse the game in both camps and return to do it all again as quickly as this coming Friday at The Vertu Motors Arena when Eagles will be hoping to keep the winning run going.

This Friday’s return fixture at home is set to be a sell-out so hurry to get the limited remaining tickets on the box office.