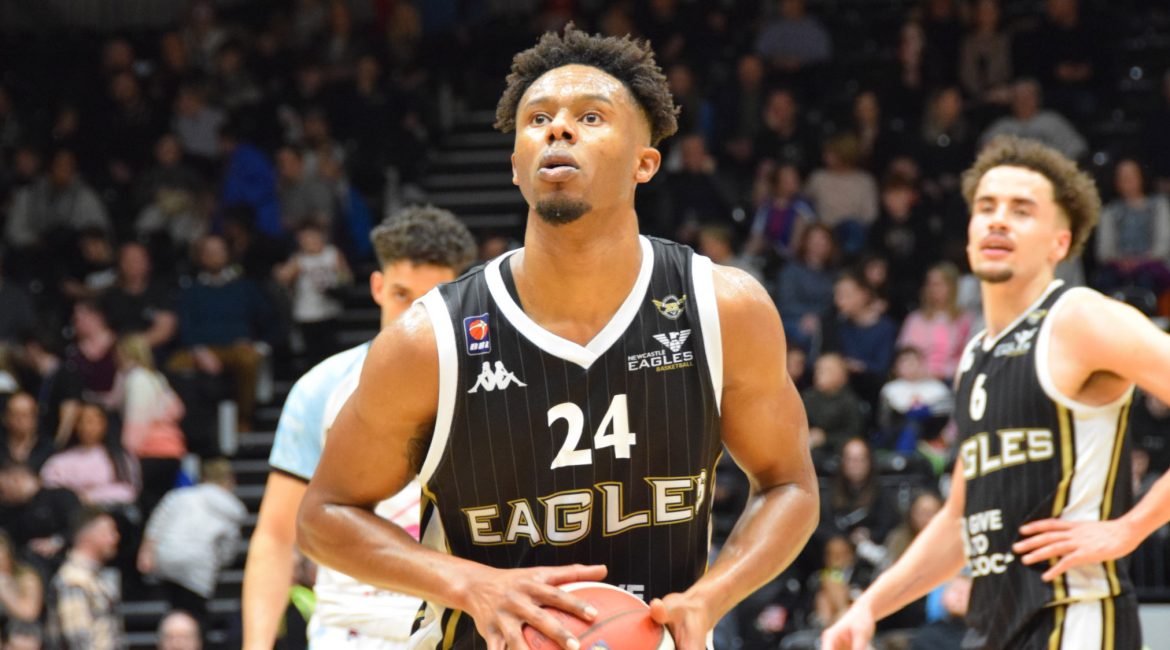 Can one player kickstart a campaign? Only time will tell.

But returning hero Justin Gordon could well be the catalyst Newcastle Eagles need to mount a convincing playoff push.

Hot off the plane from Hungary, the North Carolina native looked like he’d never been away as he packed the stat sheet from start to finish.

And if Gordon can build on his 14 points, eight rebounds, six assists, three steals and a block at Glasgow tomorrow then Newcastle could seriously start to think about salvaging a hugely disappointing season.

A big win against basement club Surrey Scorchers is hardly evidence of a roster reborn.

But Ian MacLeod’s men did all they could against the injury-ravaged visitors on a night when the Eagles surged towards a 114-72 victory.

Surrey appeared to have turned a corner on January 1 when the Scorchers stunned BBL onlookers with a hard-fought win against big-spending London Lions.

But that victory turned out to be a false dawn for the struggling southerners, who arrived at the Vertu Motors Arena seeking to arrest a confidence-sapping five-game losing streak.

The midweek exit of injured US star Siquan Jamison hardly helped the visitors’ build up to a match neither team could afford to lose.

And Newcastle’s smart recruitment of familiar face Gordon only appeared to add to the problems facing a short-handed Surrey roster.

Another boost for the homecourt fans was the return to action of sharpshooter Louis Sayers after the versatile swingman broke his foot in December.

The Eagles’ three-point specialist practiced all week after having his protective boot removed.

But few expected to see Sayers suited up and ready for action in time for the Scorchers’ clash.

It was Gordon who marked his comeback earlier than anticipated when team-mate Brandon Peel was forced to seek treatment for a bloodied nose just 38 seconds after tip-off.

And it didn’t take long for the 2021 BBL Cup final MVP to remind Newcastle fans just what they’ve been missing.

An early two-pointer and a brace of missed threes hardly hinted at what was to come.

But Gordon exploded into life with three first period minutes remaining as he jammed home a cute Rahmon Fletcher reverse pass to complete a move that brought a frenzied crowd to its feet.

High energy and aggression in the paint became a trademark of the former Feyenoord forward’s all-action displays in an Eagles vest during the behind-closed-doors 2020/21 campaign.

But this was the first time Newcastle fans had witnessed ‘Flash’ Gordon in the flesh — and it looked like being well worth the wait.

Eight quick points from Corey Johnson closed out a convincing first quarter from the men in black…albeit against a lacklustre Scorchers side.

And the hosts maintained their dominance after the restart with Wesley Person Jr enjoying his best first half in an Eagles vest.

The highly rated American has epitomised Newcastle’s inconsistent form this season but Surrey felt the full force of a special talent.

An on-song Person Jr can be unplayable and his 15 first half points — shooting six from nine from the floor — underpinned a 57-38 lead at the break.

Sayers, meanwhile, had enjoyed an incident-free return and Kyle Williams showed flashes of brilliance joining him off the bench.

Midway through the second period the lively American salvaged possession on halfway with an acrobatic take before unleashing a monster reverse pass straight into the hands of an unmarked Peel.

And it looked like Gordon’s much heralded arrival was already bringing out the best in team-mates with plenty to prove heading towards the business end of a testing season.

The Eagles led 82-52 with 13 minutes on the clock before another astonishing Williams grab kept the ball alive to set up Fletcher for his latest trip to the free throw line.

Newcastle’s lead was 33 points heading into the final quarter and sorry Surrey had no answer to the hosts’ red-hot offence.

Four Eagles stars were chasing double doubles [correct] down the stretch but head coach MacLeod turned to youth with the win guaranteed and Sunday’s cross border trip to Glasgow in mind.

And the hosts closed out a vital victory with Themba Yabantu, Sauveur Kande and Sam Mamuini keeping Surrey’s defence keen.