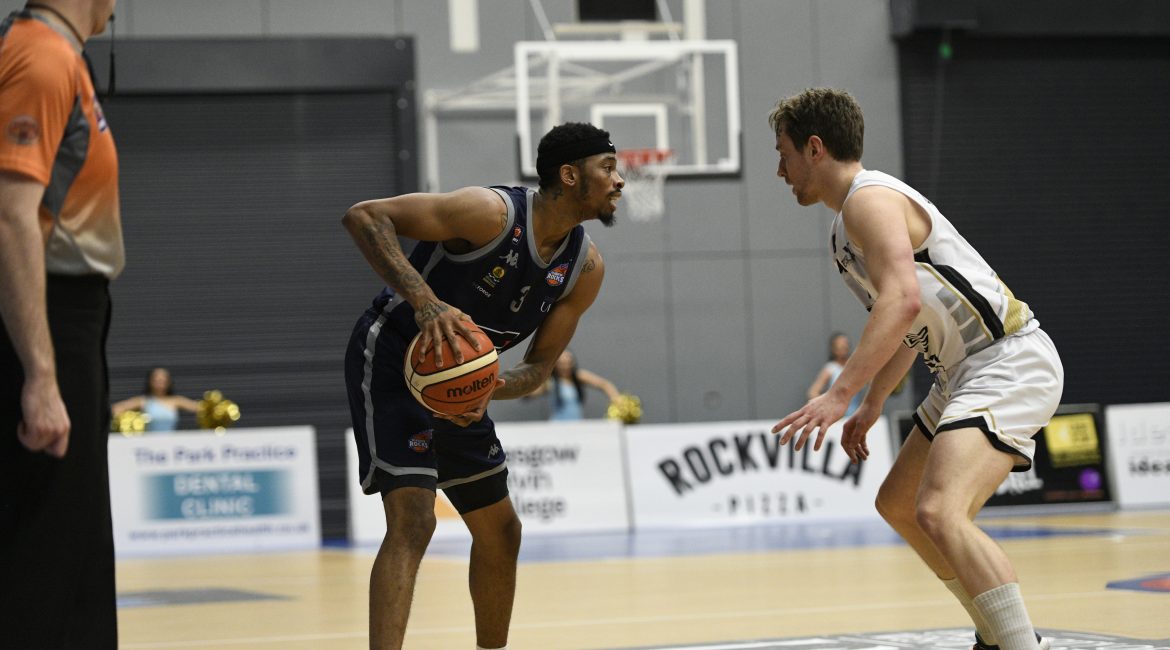 The Newcastle Eagles bounced back to winning ways last night with a thrilling away road victory at Glasgow Rocks. The Rocks went into the game top of The BBL and having won at Leicester on Friday night. The same night Newcastle had lost by 23 at home to Sheffield.

The form book therefore appeared to favour the home side but games are rarely played on pages or in books and despite being without the injured Sade Aded Hussein the visitors certainly turned the form guide around.

Eddie Matthew was rewarded for being one of the few players from Friday’s game that came out with any credit with a place in the starting five and he joined his fellow four starters in being the Eagles’ only scorers during 40 pulsating minutes.

Mercurial point guard Rahmon Fletcher and dominant centre C.J. Gettys were the outstanding players for the Eagles. But a solid display by veteran forward Darius Defoe and a fine second-half effort from Mike Morsell were the supporting factors that tipped the scales in Newcastle’s favour.

Eagles started well with Defoe and Gettys both looking to score inside and create opportunities for Fletcher to drive to the basket. It was a strategy that worked inside the first ten minutes. Despite Ali Fraser putting the Rocks in front at 8 – 7 it was the only time the Scots led in the first.

Fletcher’s two free-throws making it 5-point lead at 21 – 16 as the team’s entered the second period. It was fiercely contested basketball with Eagles still holding sway, just, until a Jonny Bunyan triple put Glasgow in front 29 – 28.

Fletcher, Gettys and Defoe though were not phased and a 6 – 0 run from them forced the Rocks into a time-out with the visitors still up by five. However, whatever was said in the Rocks 60-second team-talk certainly did the trick as the game turned on its head.

Their change of tactics and personnel got them exactly what they were looking for as 14 – 4 run turned that five-point deficit in to a five-point 43 – 38 lead as the teams headed for the locker rooms.

Was the momentum with Glasgow now? The answer was an emphatic no from Newcastle. Morsell who had endured a fruitless first half suddenly came alive and along with the irrepressible Fletcher inspired Eagles to a 14 – 4 run of their own to turn things around again.

A Fletcher dagger-triple actually continued that run as Eagles opened a ten-point gap at 61 – 51. Rocks hit back again with six unanswered and Coach Ian MacLeod called a time-out to steady his ship.

From that break his side courtesy of Gettys and a Morsell triple moved them back up by nine with Rocks nailing the final bucket of a third quarter that definitely went Newcastle’s way as they took a seven-point advantage in the final quarter.

It was Newcastle still controlling the tempo as the minutes ticked down with Gettys taking rebound after rebound and Morsell tripling. It looked as if the Eagles had done enough. However, Greg Pryor had other ideas and six personal from him closed the gap to two.

Newcastle though didn’t panic and when Fletcher found Defoe late on for the game’s final score an excellent four-point road win was sealed.

Eagles starting five scored all their points with Gettys adding an amazing twenty rebounds to his personal scoring tally. However, despite not scoring, the bench players did give Coach MacLeod valuable minutes in what was a tremendous bounce-back win from Friday’s disappointment.

The Eagles are back in action this Friday night as they tip-off their BBL Trophy run: