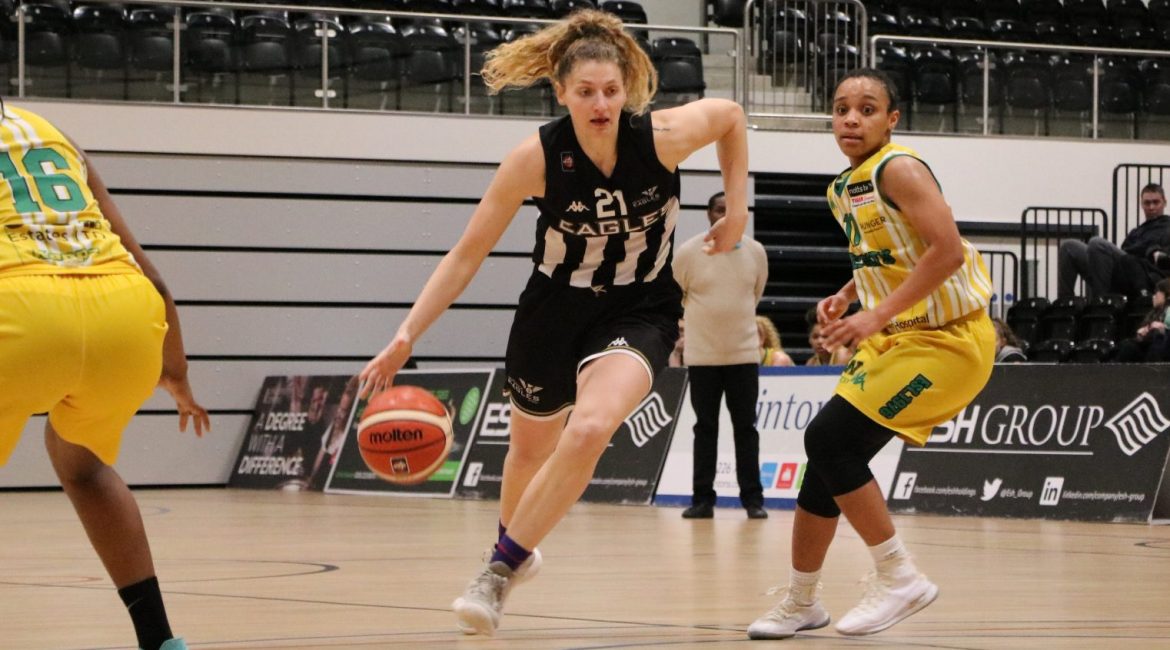 Kara Bonenberger hailed her team-mates’ composure under pressure as Newcastle Eagles WBBL withstood a late fightback to claim a 76-67 win against Nottingham Wildcats.

The American forward notched another trademark double double as the hosts underpinned their credentials as serious top four challengers.

“Coming into the game coach Bunten had talked about Giulia having the confidence to score more points and that’s exactly what she showed against Nottingham,” said the Pennsylvania native.

“If she can add those points to the rest of her game going into the final few months of the season then that’s great news for Newcastle.

“Giulia is in fantastic form and to see her score 20 points is a boost for all of us.”

Simioni added 10 assists and seven boards to her Eagles-high points total on an afternoon which highlighted the Newcastle captain’s immense value to the hosts.

The playmaker was instrumental in a lightning start from Chris Bunten’s side which saw the black and whites open up a 15-point lead within five minutes.

“We wanted to come out strong and stop the Wildcats in their tracks,” added Bonenberger. “They had a match the previous day so we knew that if we could get at them early it would be difficult for them to come back.

“We’ve not always started well this season and so it was important to make that first quarter count.”

Newcastle led 26-18 heading into the second period and the hosts opened up a 15-point lead at the half.

A Simioni three-pointer immediately after the restart stunned Nottingham and the Eagles led by as many as 20 in the third quarter before the visitors finally found some form.

“We expected them to come back at some point and they managed to get to within five in the final period,” added Bonenberger.

“At that stage the pressure was on. I’ve got to give credit to my team-mates for staying cool when it mattered. I’m not the best in that situation but the team as a whole coped well.”

Newcastle’s victory saw the Eagles move to within six points of fourth-placed Nottingham with a game in hand.

And after Bunten had insisted a top four finish was a realistic target for his talented team, Bonenberger admitted defeat against the Wildcats was not an option.

“It was a huge game for us and a huge win,” she added. “Had we lost that one then making the top four would have been so much more difficult.

Bunten will have been delighted with a third win on the bounce but there was little the Eagles could do to halt Nottingham’s star players.

Newcastle are back in action next weekend with back-to-back away games at Oakland Wolves and the BA London Lions before returning to the Eagles Community Arena on March 16 with Essex Rebels due on Tyneside.