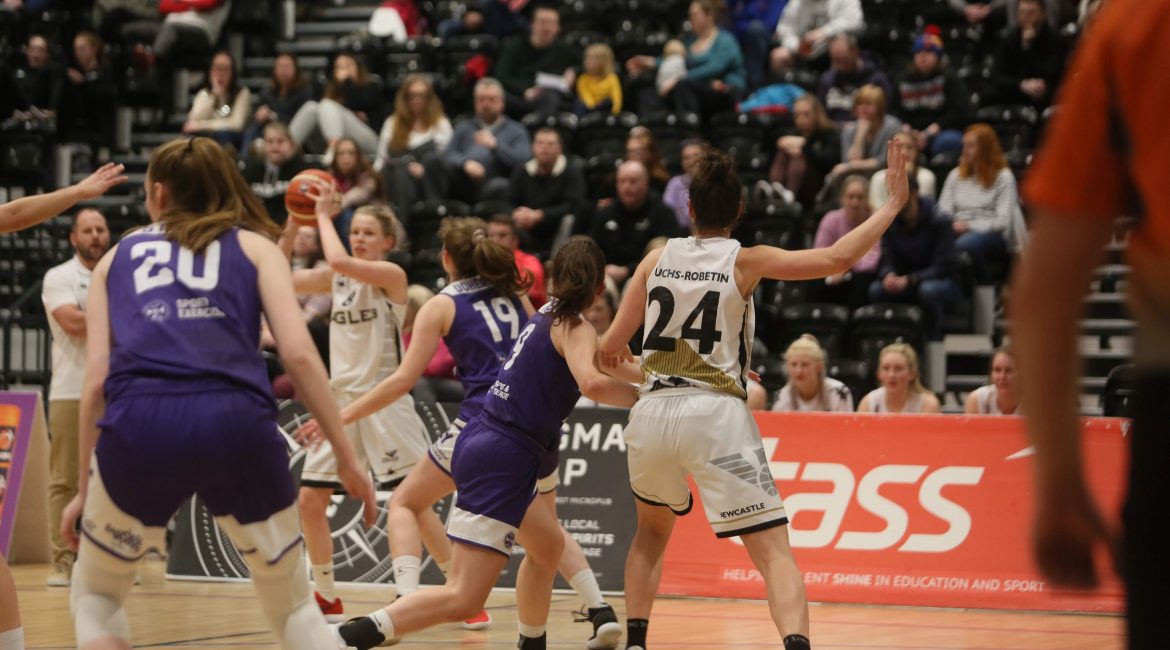 Chris Bunten’s side ran out comfortable 72-47 winners against the nonplussed Edinburgh outfit on the back of a big double double from Lisa Koop.

The home side looked a little leggy during a low-key first quarter as Bunten’s players sought to shake off the legacy of a long road trip to Sevenoaks Suns.

And although both Anja Fuchs-Robetin and Koop soon settled into their offensive rhythm there was no joy for Georgia Ohrdorf.

The Aussie forward’s reputation as the Eagles’ most consistent matchwinner precedes her.

And Pride did a good job restricting Ohrdorf’s offensive threat as November’s Player of the Month failed to score in six first period minutes.

If the hosts were fortunate to take an 18-15 lead into the second quarter then Bunten’s title contenders showed their true quality heading towards the half.

Hapless Caledonia had no answer to a compelling mix of stifling defence and destructive offence with Koop and Fuchs-Robetin dominating the paint.

And the Scots started to rack up the fouls as they struggled to emerge from the home side’s punishing press and became increasingly ragged in defence.

Head coach Bart Sengers was forced to call a timeout with five-and-a-half minutes of the first half remaining with his team suddenly trailing 27-19.

But things went from bad to worse for the visitors as Newcastle targeted Pride playmaker Maela Faleu and extended their own lead in the process.

The Eagles held Caledonia to just five second period points on their way to building an impressive 39-20 half-time advantage.

And the only blot on the Tynesiders’ copybook was more errant shooting from the bonus stripe: a paltry return of seven from 18 first half free throws mirroring the previous day’s poor effort at Sevenoaks.

If more time spent nailing shots from the line is clearly necessary, then almost everything else about Newcastle’s game right now screams perfection.

Easing through the gears in the first of three ECA clashes on successive Sundays, Bunten’s roster looks every inch the future champions.

And if next weekend’s clash against the Wildcats will prove a far sterner test of Newcastle’s trophy credentials then this dominant display was built on professionalism and process.

A third quarter slugfest saw both teams trade baskets – the most notable of which came from the hands of Ruth Thornley.

Newcastle had missed all of their previous nine three-point attempts before the local favourite sank an effort from way downtown with just a second remaining on the shot clock.

That score fired the hosts 59-38 ahead and it was game over going down the stretch with Koop bagging 15 points and 11 rebounds.

Fuchs-Robetin closed out an impressive display with a game-high 18 points, eight rebounds and six steals with Lithuanian Mante Kvederaviciute falling one rebound short of a double double.