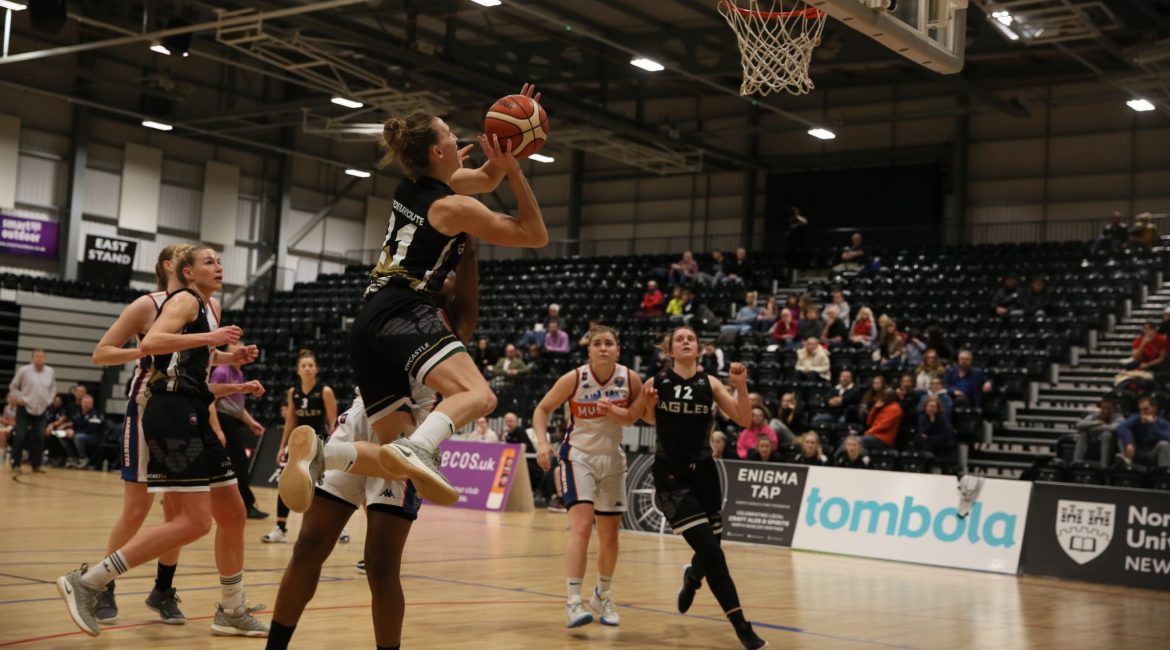 Coach of the Month Chris Bunten is one victory away from this season’s WBBL Cup final after guiding in-form Newcastle to another big win.

And few would bet against Bunten’s roster bagging a place in the first of 2020’s showpiece finals on the back of a 62-52 win against Manchester.

Newcastle shocked the Mystics last month after blowing a previously close clash wide open on the back of a clinical final quarter.

But the tables were immediately turned in this hotly anticipated rematch as the visitors held the Eagles scoreless for the first three-and-a-half minutes.

Manchester’s Georgia Jones was proving to be a serious threat at the offensive end and Jeff Jones’ side surged into a 9-0 lead before Bunten called a timeout.

That crucial intervention, coupled with the introduction of Mante Kvederaviciute, allowed Newcastle to rally.

And the homecourt favourites had reduced the deficit to four heading into the second quarter.

And the former Team Northumbria star sat out most of the first half after paying the price for an overly aggressive approach early on.

Slowly but surely Newcastle clawed their way back into an increasingly feisty affair and the Eagles led for the first time in the 16th minute.

WBBL Player of the Month Georgia Ohrdorf began to exert pressure at both ends of the floor.

And skipper Giulia Simioni delivered a masterclass in defence as she shut down the previously menacing Jade Mbam.

But it was Manchester who sank the final basket of the half to take a 33-31 lead into the locker room.

Much like November’s league clash in the North West, there was nothing to separate the teams for three quarters as another nip and tuck affair captivated a noisy crowd.

Not for the first time this season Lisa Koop found herself in foul trouble but the hard-working centre wasn’t alone as Bunten’s players bore the brunt of some heavy-handed officiating.

The towering German was joined by Kvederaviciute and Ohrdorf on three fouls with 15 minutes on the clock.

And only a fourth foul on Allen with 12 minutes to play softened the blow for an increasingly frustrated Bunten.

Referee Roger Harrison felt it necessary to talk things over with the Eagles’ playcaller prior to the fourth period.

But Bunten hardly looked in the mood for a lecture as his side sneaked into a 41-40 lead with 10 minutes to play.

Ironically it was Mystics’ Sam Roscoe who became the first player to foul out with six minutes to play.

Team-mate Rheanne Bailey joined her with 46 seconds on the clock… by which time Newcastle led by eight.

And there was no way back for Manchester with Ohrdorf and Kvederaviciute in fine form to close out a famous cup win for the Eagles.