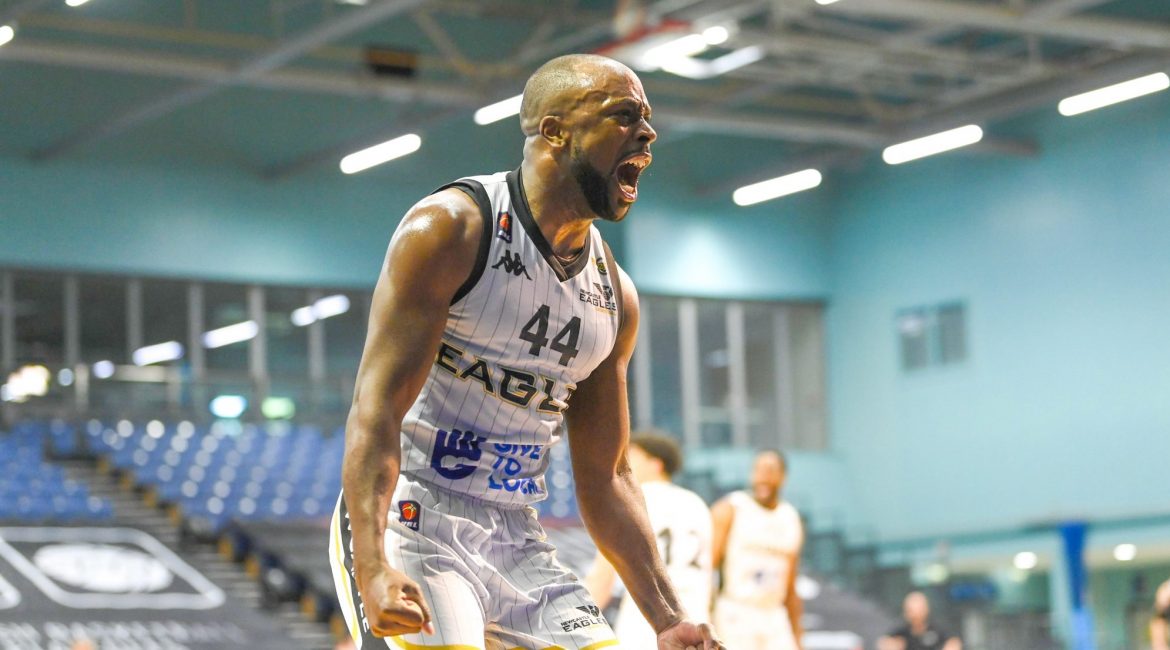 Cometh the hour or even the second cometh the man or was it men? Somehow, some way, Justin Gordon and Rahmon Fletcher came up with a last-ditch play to take the Eagles through to the BBL Play-Off semi-finals.

It could not have been more dramatic nor could this Newcastle side have shown any more character and determination as they produced a simply stunning final quarter comeback to tip the balance in their favour. Just!

Basketball very, very, very rarely has tied games. Indeed, it can only happen in a two-legged affair but that’s what happened last night in Worcester. Leading by a mere two points from the first leg any win, a loss by one point or a draw would take them through. A draw it was.

But, in all honesty, almost until the death throes of the game, Newcastle’s season looked as if it was over as they were second best for the majority of the game against a courageous and dogged Sheffield outfit.

The Tynesiders only led once in the whole game when they came back from a nine-point deficit conceded over the first two quarters to take a 36 – 34 lead with 4:16 to play in the second period. Even then Sheffield produced another 9 – 0 run to stretch away again.

Eagles at Gladiators in BBL Trophy First Round Draw
October 16, 2022

Gordon had been the one Eagle that produced a full forty-minute performance and his final tally of 25 points, 9 rebounds and 4 assists including that last second score gave him MVP honours on the night to complete a tremendous personal effort over the entire tie.

He wasn’t the only hero though as all the other players who got on court for the Eagles all had a contribution that counted in the final analysis. Evan Maxwell and Cortez Edwards weighed in with influential points. Fletcher had nine assists and Darius Defoe helped anchor the defence.

In truth the Eagles were far from their best but sometimes it’s more about what you do in adversity and how you stay together when things seem against you that make the difference. That was certainly the case as the game went down the stretch.

A game that only see-sawed in the respect that every time Sheffield seemed to get away from Newcastle, the Eagles somehow managed to battle back. The Sharks had bitten early in the game. Cancelling out the first leg deficit with the first score of the game.

By the end of a terrific first quarter for them, the Yorkshire outfit lead by six on the night and four on aggregate with a 28 – 22 ten-minute effort. It stretched more in the second until Gordon and Maxwell led the Eagles back into it to go up two and four overall.

Sheffield though went to the locker room holding a five-point lead at the half keeping them just ahead in the tie at 43 – 35. The third quarter was a titanic battle with neither side giving an inch. Newcastle battering away at their opponents but the Sharks holding on.

It meant Coach Ian MacLeod’s men went into the final period needing a four-point win over those ten minutes to make sure they could go to Leicester for next week’s semi-finals.

They looked like they were not going to do that as Sheffield opened the 4th with nine unanswered points. Eagles were still down 72 – 58 with 6:48 to go but finally clicked into gear at both ends of the floor producing a magnificent 23 – 9 finish to the game to tie it all up on the night.

That was perfect timing as it took them to a five-point winning quarter tying the game up on the night and sneaking them through by that two-point margin they’d earned in their own arena on Tuesday night.

The Eagles will now face either regular season champions Leicester Riders at the semi-final stage next week over two legs at Leicester’s Morningside Arena. It could be just as dramatic again.