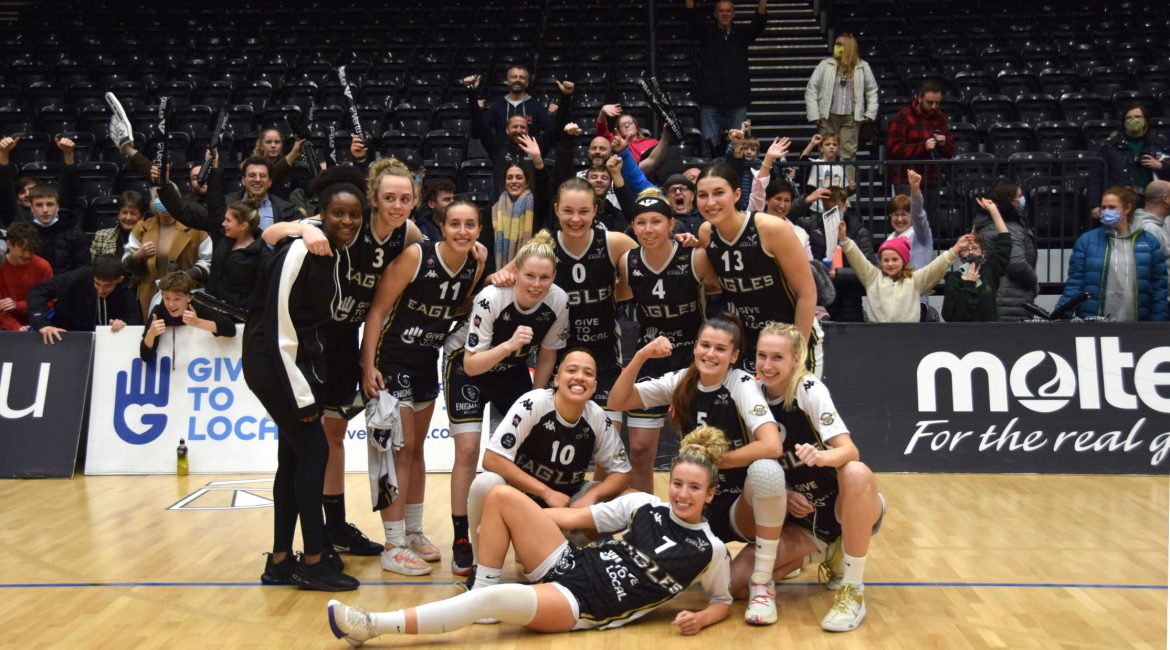 Brilliant Newcastle Eagles booked their place in the 2022 WBBL Cup final on the back of a battling performance against Leicester Riders.

Watch the full game from the Vertu Motors Arena:

And a repeat of May’s WBBL Play-Off final — live on Sky Sports — presents the Eagles with another opportunity to test themselves against the best team in Britain.

Ebony Horton and Chloe Gaynor combined for 31 points on an historic night for women’s hoops in Newcastle.

But a victory built on fighting spirit and putting bodies on the line owed much to the work rate of tireless duo Rachael Bland and Dora Cipcic.

Only eight points separated the two teams on Tyneside in October but it was the Riders who snatched victory from the jaws of defeat.

The hosts had led by 12 points at the half in a rollercoaster championship fixture only for Leicester to hit back after the break.

And Eagles’ favourite Bland conceded the clash was a case of unfinished business as far as the vengeful women in black were concerned.

With a place in next month’s showpiece final at stake, both teams knew a fast start could be pivotal.

Yet again it was Bunten’s side that made all of the early running and a 16-9 first quarter lead was fully deserved.

Not for the first time this season pocket rocket Jessica Eadsforth-Yates set the tempo with an all-action display from the tip.

And when Bunten finally gave his summer signing a first break of the night, the busy guard had added four boards and two assists to her five points.

The Riders, with Oceana Hamilton posing a constant threat in the paint, were winning the battle of the boards.

But Newcastle’s defensive intensity was crippling the visitors’ offence and no player was feeling the heat more than Hannah Robb.

The talented Leicester guard had led all scorers with 23 points on Tyneside seven weeks ago.

But the Eagles restricted Robb to just two points in the opening 10 minutes as she went one from four from the field.

Cipcic brought added hustle to the defensive party during the second quarter as the Croat locked down Leicester time and again.

And Newcastle could have put the game to bed given better finishing under the glass.

Instead, both teams combined for a paltry four points during the first five minutes of a scrappy second period.

Indeed, it was only when Gaynor, back in the game after Hamilton had struck Newcastle’s centre in the face, sank a brace of mid-range jumpers that the scoreboard began to tick over again.

But Leicester had also found a way to the basket with an arcing Robb triple and a late Anna Lappenkuper lay-up reducing the Eagles’ advantage to four points at the half.

As predicted, this no-holds-barred, winner-takes-all semi-final was shaping up to be a pre-Christmas classic.

And when Brooklyn Mcalear levelled the scores 90 seconds after the restart it was impossible to pick a winner.

A killer brace of Robb three-pointers fired the Riders 37-32 ahead with two minutes of the third period to play.

And Leicester led by five heading into the fourth quarter as a low-scoring affair became more tense by the minute.

Gaynor, who had limped out of the action in the final minute of the third period, returned to the fray within 100 seconds of the restart.

And after receiving rapid treatment on a painful ankle injury, Newcastle’s in-form centre sparked a thrilling 8-0 tear to open up a 44-43 lead.

A nervy finish to a fabulous advert for women’s hoops had the noisy homecourt crowd on the edge of their seats.

But the Eagles finished as they started with stifling defence to close out a compelling clash at a bouncing Vertu Motors Arena.

The Eagles will now face the London Lions at Birmingham’s Utilita Arena on Sunday 30 January 2022 with a 12-noon tip-off. Tickets to be part of the Eagles fans section will be on sale soon.