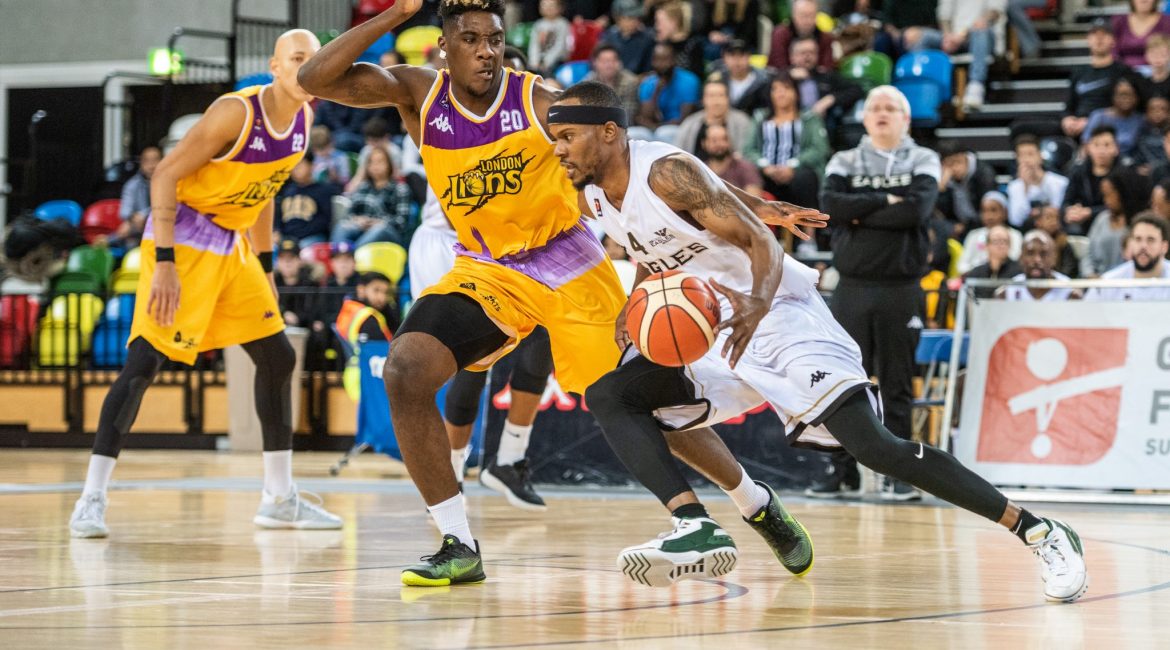 The dreams of Esh Group Eagles Newcastle of returning to a BBL Cup Final at the Arena Birmingham were shattered this afternoon down in London. After taking a slender two-point lead in the first-leg at home it was always going to be tough going in to the Lions Den and so it proved.

The Lions have been the form team in the BBL this season and showed that form with a solid display where once they got in front they showed great resilience against everything the Eagles threw at them. For Fab Flournoy and his men it would have been a long hard trip home to Tyneside.

London will now face either Manchester Giants or more likely Glasgow Rocks in that showpiece final to be held on Sunday 27th January. The Rocks holding an 8-point lead with their home leg to come.

It was Flournoy himself leading from the front and in the starting five who got his side off to a terrific start by hitting two triples either side of a Victor Moses deuce to put the visitors up 8 – 2 and by eight overall.

Lions hit back with Justin Robinson and Ladarius Tabb prominent in that comeback to take the lead by a single point on the night. Back-to-back triples by Moses and Darius Defoe had Newcastle up again on aggregate. It was nip and tuck thereafter until Robinson and Paul Guede both tripled with the last scores of the quarter.

It meant Lions led by 27 – 26 and when Flo Larkai dropped in a free-throw to open the second period the aggregate scores were tied up. Off the bench for the Eagles came Jeremy Smith to score four quick points to regain the advantage but Lions began to look strong despite the best efforts of their opponents.

The decisive break then came as London led by the impressive Brandon Peel produced a 12 – 4 run that gave them control of the tie. Smith kept his side in it but by the end of the half the gap had moved to 53 – 45 and the Eagles were playing catch-up.

Despite the huge efforts of the impressive Moses and Smith in particular, they could not force their way back in the second half and Peel’s massive triple on the third quarter buzzer meant Lions had increased their lead to eleven on the night and nine on aggregate with ten minutes to play.

Kyle Williams triple to open the final period gave the visitors hope but again London held firm and just came up with big shots when required. A 14 – 6 run included four baskets from beyond the arc and at 89 – 73, Newcastle looked dead and buried.

Still their pride and fighting ability brought them back in to it and Drew Lasker netted a pair of free-throws late on to cut the gap to 91 – 85 and four on aggregate. However, the Eagles were reduced to fouling and sending Lions to the line to try and stop the clock.

GB International and reigning BBL MVP Robinson was the man that Newcastle had to foul as he took control of the ball and he iced the tie for his side with four from four free-throws to send the BBL leaders through to the Cup Final.

For Flournoy and his coaching staff this was an opportunity not taken and they will need to look long and hard as to where they go now in their quest to re-establish the Eagles at the top of British Basketball.