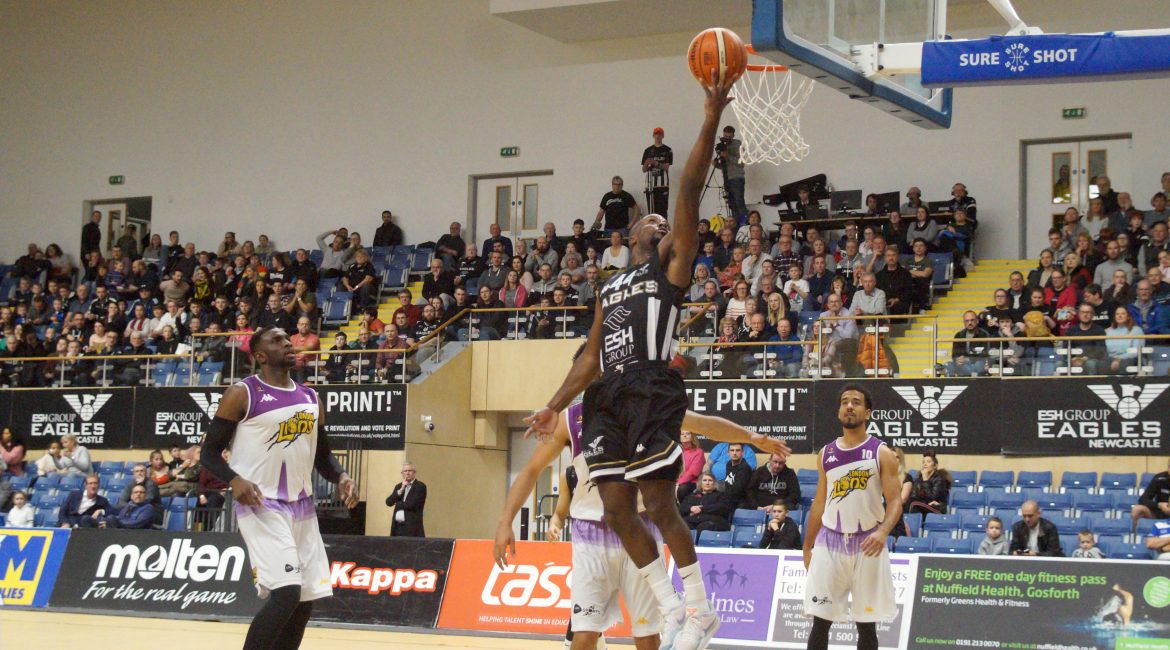 It was advantage Newcastle Eagles in the first leg of the BBL Cup semi-finals after they managed to dispatch BBL leaders London Lions in nerve wracking fashion.

Heading into the contest, the hosts had lost their last two on the road – with the Lions themselves handing player-coach Fab Flournoy’s men a damaging 96-78 loss just a fortnight prior.

Facing their biggest test of the season so far, Newcastle were keen to build a big lead in front of the Sport Central faithful before they head down to the Copperbox Arena for Sunday’s second leg.

After a few misfires from both sides on offence, the first quarter began to heat up, with both sides going blow for blow in the early stages.

Leading the charge for the Eagles were point-guard Rahmon Fletcher and forward Victor Moses who both netted difficult three pointers early in the contest before masterfully connecting for a wonderful score to hand the hosts an early lead.

Unfortunately for the Eagles, London’s stars were also out in full force, with forward Ladarius Tabb and reigning league MVP Justin Robinson highlighting why the Lions are one of the BBL’s leading lights this year, showing off some clinical shooting and some dominant drives to the basket – the score sitting at 21-17 in favour of the visitors at the end of Q1.

Unlike the start of the first quarter, the second was played at a frantic pace with the Eagles displaying their championship pedigree on both offence and defence as Fab Flournoy’s men managed to pull off a 10-point swing to give themselves a 27-21 lead early on in Q2.

However, the BBL leaders came out fighting – tying the contest before pulling in front to take a 35-33 lead.

But thankfully for the Eagles, the introduction of veteran Darius Defoe helped to settle a nervy second quarter, with the forward showing off his athleticism to dunk over the Lions defence, giving the Eagles a slender 38-37 lead heading into half time.

Q3 started with both sides trading early blows before Fletcher and Moses connected again for another score that roused the Sport Central crowd to its feet.

Shortly afterwards, the Eagles looked to have pulled further in front thanks to some clinical shooting from Moses – but unfortunately, an error from Flournoy handed the Lions an easy three points

With neither team able to establish a significant lead late in Q3 it looked as though the fourth quarter would be a nervy one.

But, right before the end of the quarter, some fantastic work on both sides of the ball from guard Jeremy Smith handed the Eagles a couple of free throws to push the hosts lead out to four heading into the final quarter – the score sitting at 58-54.

With the Rocky Balboa theme blaring out of the Sport Central speakers it almost seemed fitting that a contest between two of British basketball’s heavyweights would head down to the wire.

The Eagles came out on top early in the fourth quarter with Fletcher, who finished the contest with 22 points, again showing off his hot hand to push the hosts out further in front.

Not to be deterred, the Lions came back in roaring fashion with MVP Robinson and forward Brandon Peel both converting impressive three pointers to keep the score to close.

What followed was a couple of moments of silence at Sport Central with the visiting Lions racing up the court to convert two easy lay ups to take a two-point lead late in the fourth.

But those moments of silence were soon forgotten thanks to the magnificent efforts of Fletcher who managed to somehow find the basket twice in quick succession to put the Eagles in front 75-73 with only 1:47 left on the clock.

Time was running out for the Lions who were looking to put the game away but were unable to after some staunch defence from Flournoy’s side.

And thankfully for the hosts a missed three pointer at the buzzer from Lions forward Peel meant that the Eagles survived gifting the Sport Central crowd an early Christmas present with the contest finishing 75-73.

Fans attending our WBBL Game this Sunday afternoon at Sport Central will be able to watch the action from the Copper Box on big screens in the corporate lounge there from 4:00pm and then join us on the balcony for the women’s, which tips-off at 5pm.

WBBL Game tickets are on sale in advance now or can be purchased on the door for just £5 per person. Entry for this event is free for BBL Season Ticket Holders.