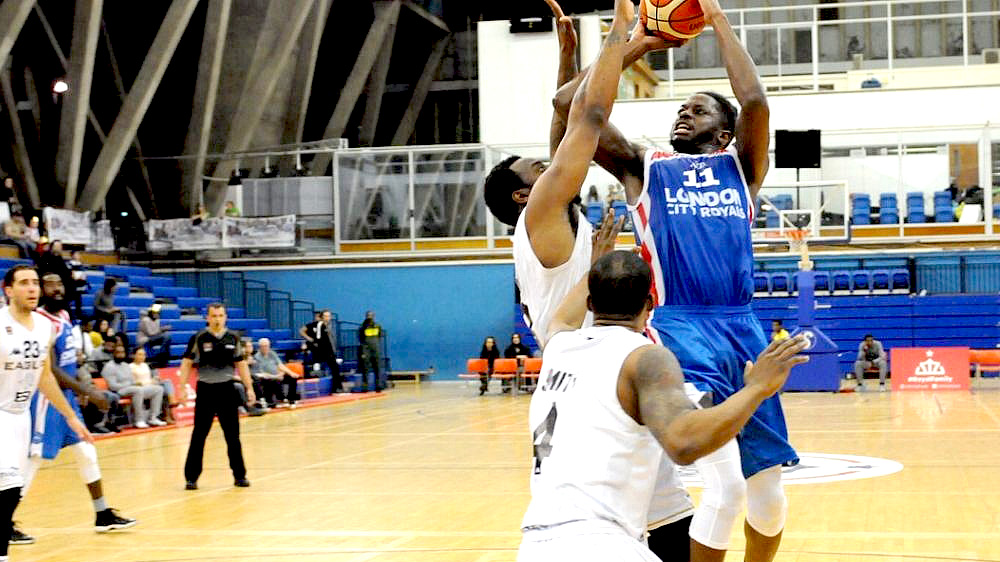 Never ever count the Esh Group Eagles Newcastle out has always been one of Head Coach Fab Flournoy’s mantras and never was it better proved in London last night. Newcastle looked down as with just over a minute to go in the game they trailed by seven to City Royals.

Watch Kai Williams get a huge three to take the game to overtime:

But big triples from the magnificent Victor Moses and Kai Williams got them to overtime and then mercurial point guard Rahmon Fletcher took over with eleven personal in the extra five minutes to seal a sensational win for a Newcastle side that has now won four-in-row and three successively on the road.

Both sides had played 24 hours earlier and picked up big wins. The Eagles at Worcester and Royals at home against arch-rivals and league leaders London Lions. It meant the teams went in to this game battling it out for a top four place with Eagles just ahead of their hosts.

It looked like it was going to be an open game at the start as both teams got in to stride early with a brace of buckets each. But then things largely dried up as perhaps the exertions of last night’s games had got in to the players legs.

Baskets traded at 8 – 8 Newcastle completely dried up and couldn’t get a shot to drop. They were fortunate that the Royals didn’t take full advantage but they did manage nine unanswered to take the lead before Kyle Williams ended the first quarter at 17 – 11 as he tripled to take Eagles to double-figures.

Whatever was said on the bench between quarters certainly fired up the visitors as they came out in the second really strongly with Moses in imperious form backed up by Kyle Williams. An excellent 14 – 2 tear saw take their first lead of the game by six points. Moses already up to 15 personal.

Then Fletcher just after draining his second triple of the period picked up a crucial third foul and had to sit the rest of the half out. Royals saw an opportunity and seized it with both hands. An 11 – 3 run put them back in front and they extended this further with a 7 – 2 finish to lead 41 – 36 as the teams left the court.

Coming out of the locker rooms for the second twenty minutes it was the Eagles that made the first run drawing level with their hosts before the to and fro continued with Royals reasserting themselves by eight before Newcastle once again levelled then took a slender one-point lead in to the 4th quarter at 60 – 59.

Once again, the game ebbed and flowed with neither side letting the other take the initiative. Royals just held sway and looked to have made the decisive strike 7 – 1 late run that gave them a crucial seven-point cushion. But the Eagles didn’t panic and those two late triples brought them back level and forced overtime.

That was when Fletcher conjured up all his MVP and BBL experience in the final stretch and lead his side home finishing with four perfect free-throws to ice the win and what an important and vital win it was. It actually lifts Newcastle in to second place in the BBL table and puts a bigger gap between them and Royals.

It also completed a weekend where they really showed their Championship credentials and toughness. With Moses and Fletcher in this kind of form and rookie Kyle Williams who also had an excellent game maturing all the time it may be the run and form that could carry them a long way yet this season.