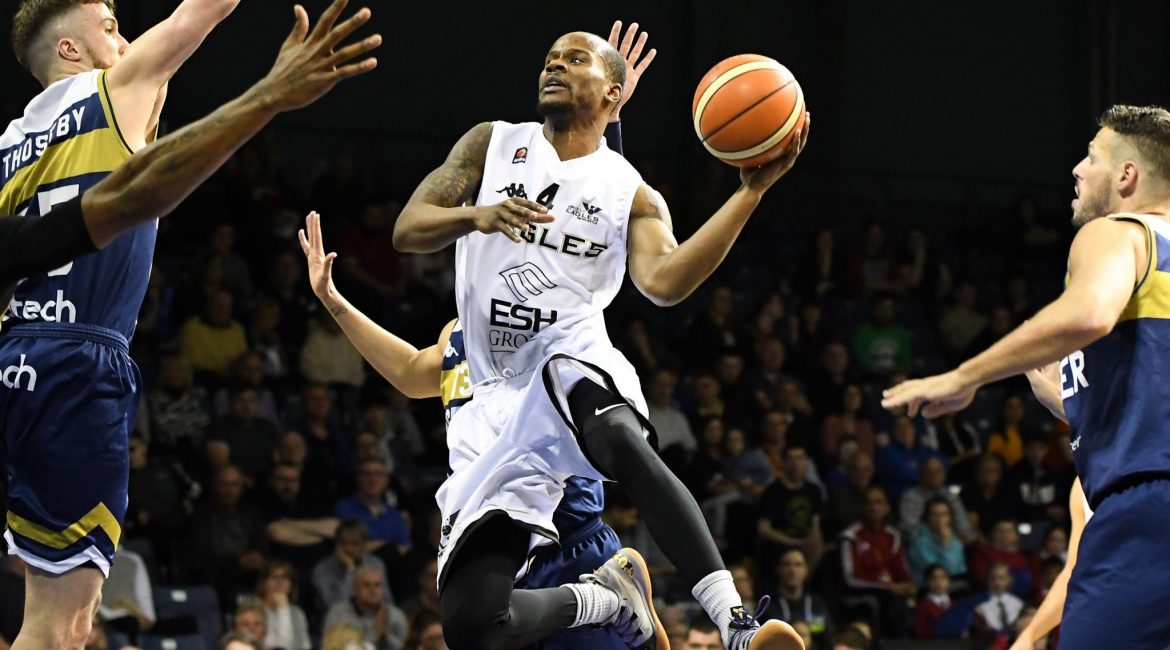 It almost goes without saying these days that when Victor Moses and Rahmon Fletcher are in full flow, Esh Group Eagles Newcastle will win. The now-famous 1-2 punch were at it again to lead their side to a vital road win in a superb cut and thrust game at Worcester last night.

Moses who has been in imperious scoring form poured in 27 big points and Fletcher 19 to assist the Eagles cause. But they would be the first to acknowledge that they need help from their colleagues and they got that in abundance with Jeremy Smith, Kai and Kyle Williams also hitting double-figures.

It was the first part of a double-header weekend for Fab Flournoy and his team which concludes tonight in London at Crystal Palace with a big match-up with London City Royals. The Eagles will go in to that game on a three-game winning run and will hope to take last night’s form in to tonight’s game.

Back to last night and the home side were first to get the scoreboard ticking over as they made a 5 – 0 start to the game but Newcastle hit back immediately with six unanswered inspired by Smith to take their first lead of the night. Smith continued his good early form on and with Fletcher and Moses joining in Newcastle edged away.

They led by seven before Worcester came back to close within a point at 18 – 17. It was then that the visitors put their foot on the gas. A 6 – 0 run to end the first ten minutes saw them lead by seven. They then opened the second by keeping the pressure on. The lead jumped to 14 as Newcastle looked in command.

But the Wolves came roaring back and surprised the Eagles with their tenacity particularly defensively as they put two big runs together. Ten points in a row was only temporarily halted by Fletcher’s triple as they netted another eight to regain the lead at 37 – 35.

Birthday boy Eddie Matthew came off the Eagles bench to net a couple of free-throws to draw the visitor’s level and then it was nip and tuck to the half-time buzzer which saw the sides level at 42 points apiece as they headed to the locker rooms.

It was Newcastle that made the first run as the second half got underway. Smith who had picked up early fouls that saw him sit the entire second quarter was back on and his added scoring power helped. Add in Moses continuing to rampage through the Wolves defence the Eagles eased back to a double-digit lead.

Worcester rallied but heading in to the final period the visitors led by six at 72 – 66. Once again inspired by Fletcher pulling the strings Newcastle made the better start to the final ten minutes to push the gap to 81 – 71 but Wolves were not finished yet.

A superb 10 – burst with the home crowd baying their appreciation saw them level the game once again as the teams headed down the stretch. The Eagles called time-out and came back on the court in determined mood.

Moses was the catalyst once again for his side as he netted a triple and added a couple of other baskets as Newcastle responded with a 9 – 2 reply that gave them the lead once again at the crucial point of the game.

Worcester had one final effort to turn the game around and cut the gap to a single point inside the last minute but it was that man Moses who sealed the win for Newcastle with the final bucket of the game to seal a thrilling road win.

With the news that rivals Leicester had fallen at home this was a crucial win and gives the Eagles a real shot at second place in the BBL table. Now, with the first part of the journey completed, they go to London City Royals tonight for the second crucial part of their tough road trip.