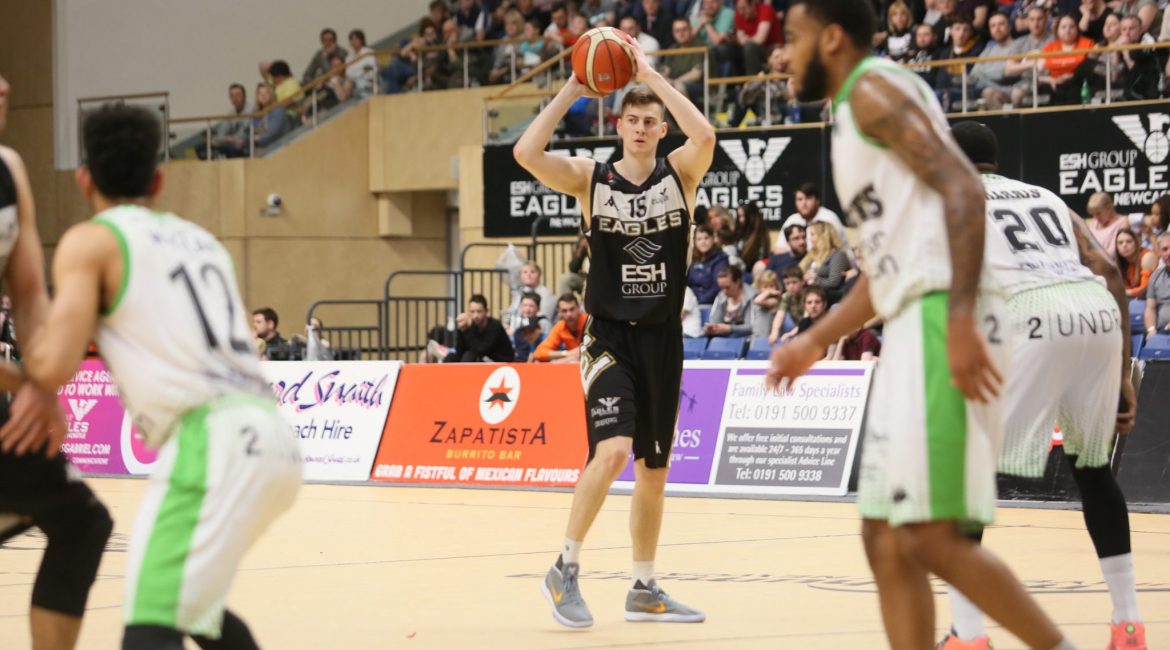 Going in to Friday night’s game against Manchester Giants, the Esh Group Eagles Newcastle knew that not only would they again be without top scorer Jaysean Paige but, Jamal Williams had also picked up an injury in training and was also out, writes Jeff King.

It made, potentially, what looked like a straight forward game against a team next to bottom of the BBL a trickier proposition especially with the Commonwealth games returnee Drew Lasker also struggling to make any impact.

In the end though the Eagles coasted to an impressive and emphatic 99 – 68 win with point guard Saah Nimley netting 28 points and Danish international forward Zarko Jukic picking up a double-double of 24 points and 10 rebounds.

Both were instrumental in the victory and vied for MVP honours on the night as the Eagles picked up what was a very important win, a fact Jukic commented on after the final buzzer.

“We were a couple of men down, but I thought we stuck together well. We had a good week in practice and I thought those that were out there showed that, and we pulled it out well in the end.”

Next up for the Eagles is Glasgow away this evening and another tough away trip for Jukic and his team-mates as they look to win out in their three remaining games to cement their 2nd place in the BBL table.

“We lost up at Glasgow the last time we played so we’re looking not just to get the win for our position but for revenge as well. We’d love to get that one back and we need to win two or even all three of our last games and we’d like to win all of them and it starts with Sunday.”

On Friday, Manchester stuck with Newcastle early but once Nimley and Jukic got going the result was never in doubt although Jukic certainly didn’t think it was all about the offensive scoring.

“I think defensive intensity was the key to our win. We kept it somewhat consistent throughout. In the first half there was some plays here and there that we gave away, but we changed that second half and just pulled away on the back of our defence.”

“For sure we’re a much better team when we get our defence right and that is key to getting our offence in gear. We must take care of the ball, but we must also make sure that we’re stopping our opponents. That will also be key in Glasgow I’m sure.”

Back to Friday though and it was the performance of both Nimley and Jukic that caught the eye and kept the Eagles fans royally entertained as the big and small of Newcastle’s offence tried to outshoot each other from three-point range.

“I love playing in the same time as Saah. He’s my buddy and he’s a real highlight reel out there at times. Being a little smaller than most he really entertains the fans when he gets hot like he did tonight he’s tough to stop.”

“For me I felt really solid today. I made my shots, ran the floor well and stayed within the system. I took the shots that they gave me, and it was a good game for me too.”

Whatever the result at Glasgow and in the remaining two games, the Eagles have already booked their play-off place and can look forward to contending for the last piece of silverware this season.

“I don’t think it matters who we get in the play-offs per say. Here it’s the best of two and you can’t really focus on too much other than yourself and deal with whoever it is when you get there.”

“The best way to get ready and progress is simply to win every game and take them one at a time and see where it leads us.”