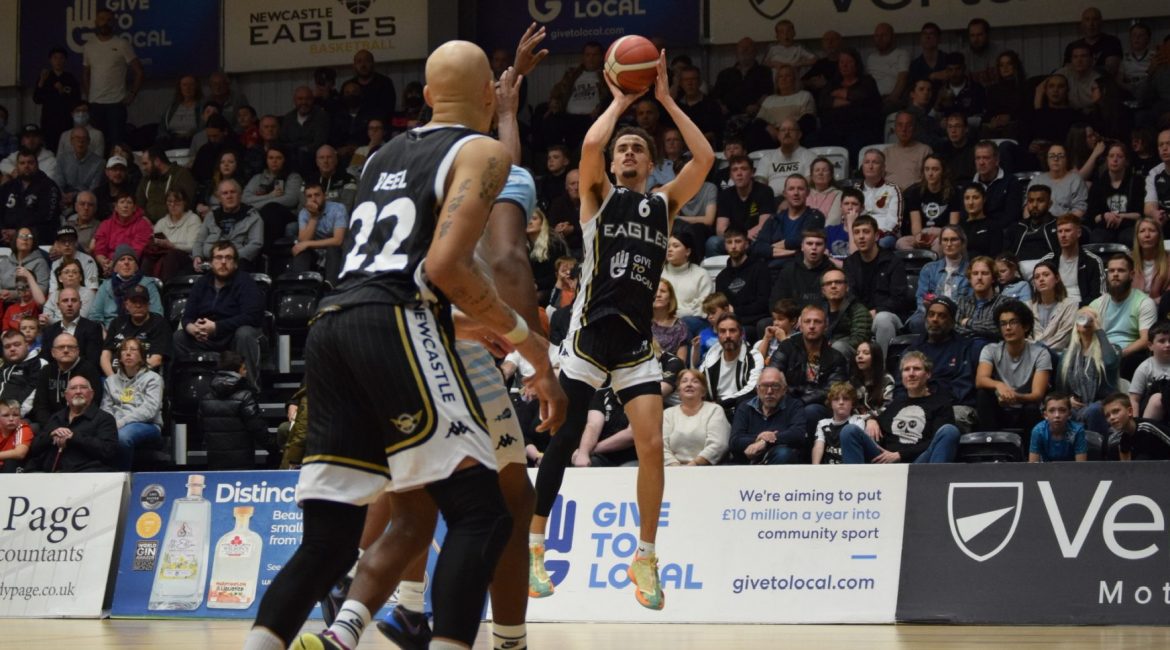 Corey Johnson maintained his sparkling start to life in a Newcastle vest as the super cool Canadian paced a critical win for the under-pressure Eagles.

The former Leicester favourite bagged a game-high 27 points as the hosts bounced back from last week’s loss at the Riders in style.

And if all the pre-match talk had focused on Brandon Peel’s hotly anticipated Newcastle debut then it was Johnson’s explosive offensive show that lit up a bruising Bonfire Night battle.

There was no place for Peel in the starting five as coach MacLeod went for a tried and tested line-up looking to restore an element of pride and passion.

And early on it was Duke Shelton who carried on where he’d left off against Leicester with an eye-catching dunk and a swift follow-up to fire the hosts 8-7 in front.

But MacLeod was forced to call a time-out midway through the quarter after a huge Andrew Lawrence three-pointer saw the Scorchers open up a 14-10 lead.

Peel stepped onto court for the first time as play resumed but the US star was forced to make a swift return to the bench after the match officials requested he remove the tee-shirt beneath his vest.

And a vocal Vertu Motors Arena crowd saw more of the former London star than they’d bargained for as the forward’s hasty wardrobe change took place in full view of another packed house.

At the second attempt Peel announced his return to the BBL with the neat steal that sent Rahmon Fletcher racing up the court.

But it was Johnson who applied the finish as a fast-flowing Newcastle move brought the homecourt fans to their feet.

And only the buzzer denied Peel a second steal in as many minutes as the Eagles’ new boy demonstrated the speed of thought and quick hands that made him a cult figure with Lions’ supporters during almost three seasons in the capital.

The hosts had forced seven turnovers on their way to a 23-20 first quarter lead and a narrow advantage was built on strongarm defence rather than fluid offence.

That all changed in period two as Peel broke his scoring duck and Johnson caught fire with a flurry of points from all corners of the court.

Surrey were still reeling at the loss of Lawrence after the busy guard had been helped from the court with an ankle injury during the first quarter.

And the BBL Cup quarter-finalists struggled to contain Johnson and Fletcher as the pair surged towards 13 points apiece at the half.

The Eagles’ evergreen skipper, still working his way towards full match fitness after suffering his own ankle sprain last month, was leading the visitors a merry dance at the offensive end.

But not for the first time this season Fletcher was demanding greater protection from the officials as he was regularly bounced around the paint and shoved off the ball.

The BBL’s two-time MVP, who would go on to complete a deserved double double [correct], still managed to finish the half with five assists and four rebounds to add to his double-figure points haul.

And Newcastle looked on course for a comfortable win and a first league victory of the season after establishing a commanding 51-38 lead.

But the Scorchers, opening their league account on Tyneside, weren’t finished yet and with Shelton and Darius Defoe in third period foul trouble the visitors made their move.

Led by the lively Stanley Davis Jr and Lemar Hemrick, Surrey launched a spirited rearguard action and the latter’s arcing triple reduced the deficit to five points with 63 seconds remaining on the third quarter clock.

Were the Eagles on the verge of a costly wobble? Not quite. A 6-0 tear to close the period, sparked by the tireless Peel and in-form Fletcher, re-established the hosts’ double-digit lead and laid the foundation for a vital league win.

And although the Scorchers kept Newcastle’s defence keen down the stretch it was the unflappable Johnson who sealed a much-needed first victory in six ahead of tomorrow’s trip to Plymouth.