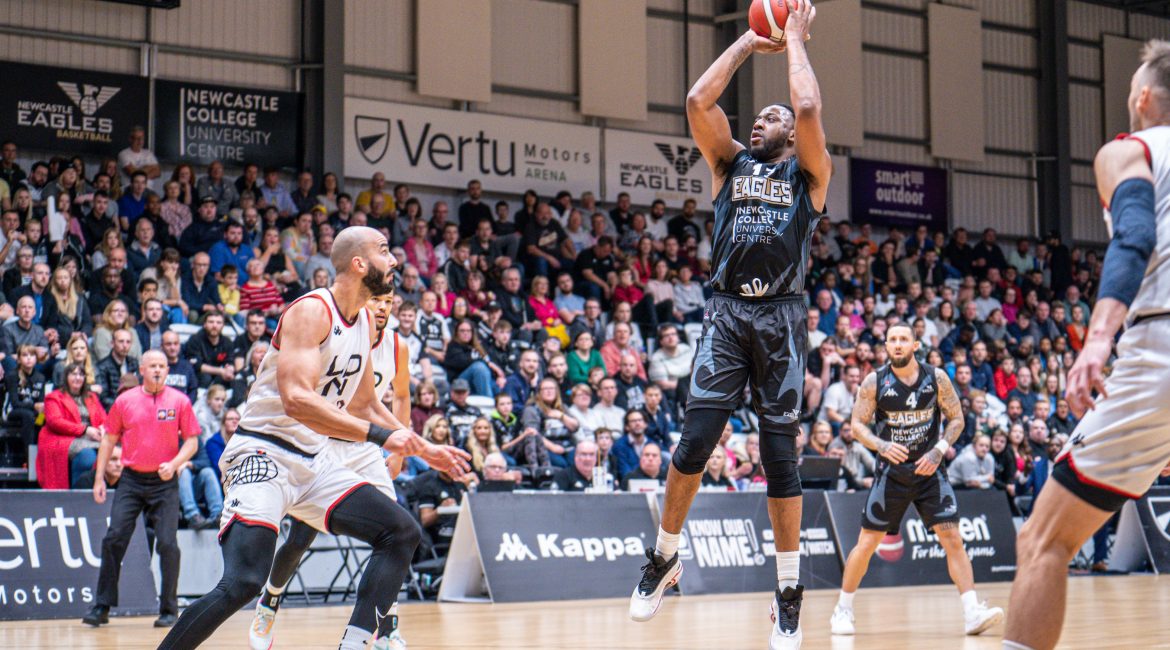 Another heroic effort from in-form Javion Hamlet was not enough to deny London Lions a fourth league victory on the bounce.

Newcastle Eagles’ new fan favourite dropped a game high 29 points before fouling out in the final 10 seconds of a fiery Friday night clash.

And Hamlet will be a marked man at Plymouth City Patriots tomorrow as Marc Steutel’s men go in search of a first win of the season.

Fans filing into the Vertu Motors Arena were greeted with the news that Newcastle have recruited ex-Manchester Giant Donovan Johnson to bolster the club’s BBL ranks.

Watch highlights of Eagles vs Lions:

The 6ft 7in star replaces Branden Aughburns after the rookie forward became the third player to leave Tyneside in as many weeks.

But Johnson will have to wait until next Friday for his Eagles debut with the former Bordeaux man due to train on Tyneside no earlier than Monday.

Aughburns follows Travon Broadway Jr and Brandon McKissic out of the North East following a turbulent start to a transitional season.

And prior to last night’s tip-off coach Steutel admitted: “There’s been a lot of change for the opening weeks of the season but this is short term pain for long term gain.

“We need to get this team right. It’s a long season and I’m excited to continue working to make us competitive as quickly as possible.”

Nobody could question Newcastle’s competitiveness and commitment in the final quarter of last weekend’s heartbreaking three-point loss at Cheshire.

And the Eagles carried that fighting spirit into a fabulous first period against Ryan Schmidt’s star-studded Lions.

London lined up without ex-NBA veteran Kosta Koufos with the Greek international a late withdrawal from the visitors’ roster.

But in-form Sam Dekker, who won the game for the capital club in the closing stages of Wednesday’s energy-sapping clash with Caledonia Gladiators, lined up alongside GB duo Luke Nelson and Ovie Soko in a strong starting five.

On court, however, Newcastle started out more than a match for this season’s title favourites with Hamlet yet again starring on the BBL stage.

And come the half-time buzzer it was Hamlet’s nerveless 19 points that ensured the hosts had it all to play for with 20 minutes remaining.

Not for the first time this season Soko flattered to deceive — a first half return of six points and three fouls doing little to enhance the former Love Island favourite’s reputation.

Fellow Brit Kareem Queeley had fared little better picking up three fouls of his own inside five forgettable minutes.

But London still found a way to lead 41-40 heading into the locker room after Dekker, fresh from his 30-point midweek haul, converted under the glass seconds before the interval.

Steutel must have been delighted with the defensive application and offensive fluidity at the heart of an impressive first half display.

And if Hamlet had stolen the show then key contributions from Jermel Kennedy and Lesley Varner had kept the Lions keen.

If London had underestimated their hosts before the break then the league’s richest club turned a tight game on its head on the back of a ruthless third quarter.

As Dekker turned the screw, Hamlet slipped into foul trouble and the latter’s fourth — following a spat with Vojtech Hruban — coincided with a 13-point Lions’ lead.

The visitors maintained that advantage heading into the final period and, unsurprisingly, Newcastle’s short-handed roster continued to tire down the stretch.

Hamlet scored his first points of the half with three minutes on the clock before Sam Mamuini entered the fray.

And the Eagles’ guard was joined on court by fellow youngster Sauveur Kande in the dying stages as Stuetel’s attention turned to tomorrow’s long trip south.