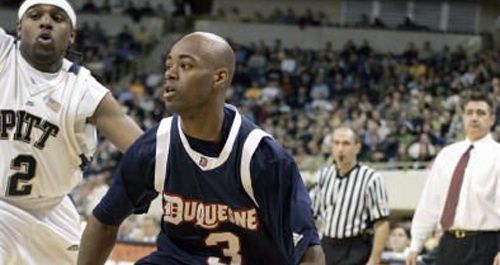 Newcastle Eagles are thrilled to announce the arrival of 5ft 11in Reggie Jackson, a new point guard for the forthcoming 2008/09 season.

Jackson arrives on Tyneside from Duquesne University in Pittsburgh having played for the Dukes for four years in the Atlantic 10 Conference where he averaged 10 points, 3.5 assists and shot 45% from the three-point line during an average of 20 minutes per game.

Jackson will work in tandem alongside former BBL Player of the Year Trey Moore in the Eagles new look back-court with player coach Fab Flournoy explaining why he plumped for Jackson.

He said “I spoke with Ron Everhart my former College coach and he told me I had to sign Reggie. He is quick, comfortable with the ball in either hand, can take it to the basket strongly on either side and can shoot the ball from outside.”

“ I respect the opinion of Ron and that combined with what I have seen of Reggie means we are excited about what contribution he can make.”

“That is hugely significant for me and for the team. We hope he will be a nice fit for the guys.”

Eagles MD Paul Blake meanwhile is equally confident that Jackson has every opportunity to become a real favourite with the fans highlighting his quality.

“There are a lot of nice links behind the obvious quality that Reggie has. Not only has Ron Everhart likened him to Demond Mallet, one of the top point guards playing in Europe who he previously coached but he has played at a good University.”

“He has played alongside the likes of Kieron Achara from Team GB and we know plenty about what kind of talent these guys have.”

“The Atlantic Ten Conference is also the same one that Lynard Stewart played in at Temple and so there is a link there too and I guess those guys will have plenty to talk about when they get together.”

“His stats show he can do plenty and because of his defensive principles, team ethic and attitude, I think he will be a big hit on and off the court.”

“Certainly to retain the core of our team and add the likes of Reggie and Trey Moore into that mix is really exciting and I can’t wait for the new season to start next month.”

Newcastle Eagles will complete their roster in the next couple of weeks ahead of a lengthy pre-season as Fab Flournoy looks to get his team fitter than they ever have been in order to ensure they have every chance of hanging onto their coveted BBL League Championship crown.