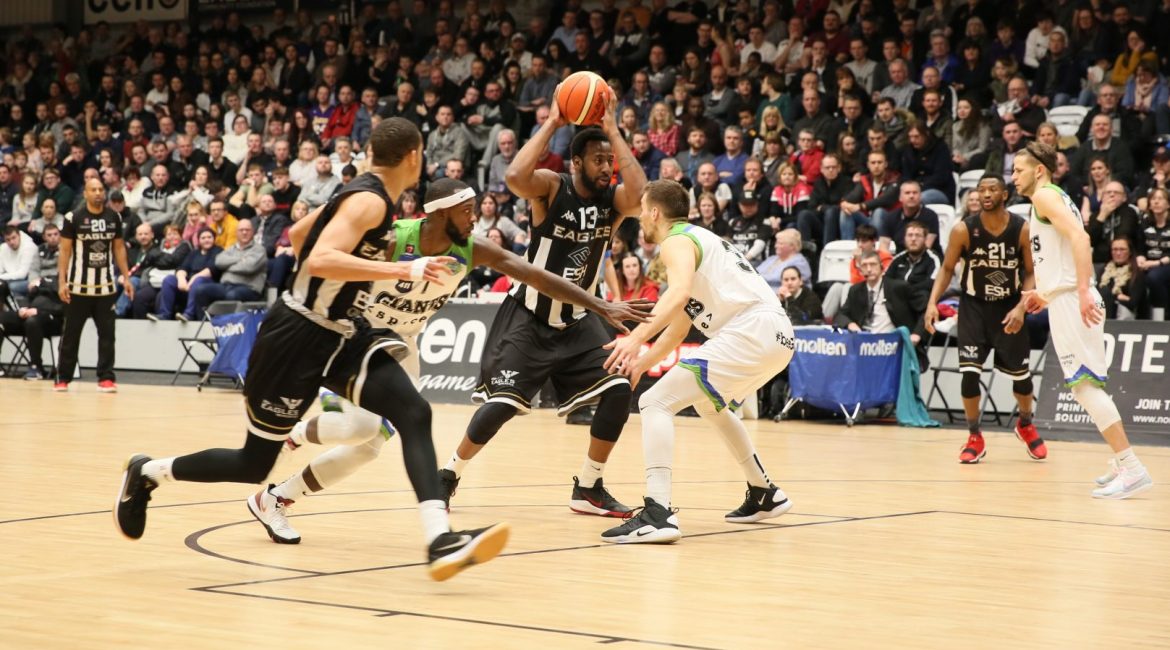 Esh Group Eagles Newcastle claimed their first win at their new Eagles Community Arena last week and tonight they are back home to host arch-rivals Glasgow Rocks in what is now the third sold out game of just four in the new venue.

Glasgow have won four in a row in the league to close the gap on the top eight and victory would push them into the Play-Off places, while Newcastle hope to close on the top two.

Last weekend’s win was a huge relief to all connected with the Eagles and whilst top-scoring Victor Moses and rookie guard Kyle Williams received a lot of plaudits, the performance of the night came from long-standing veteran forward Darius Defoe who posted a huge double-double.

His 21 points on 81% shooting and 10 rebounds went a long way to helping his side to that first win as well as winning him a place in the starting five of The BBL’s team of the week. The genial big man looked back on the team and his own performance whilst reviewing the game ahead.

“It was very pleasing to get that first win. It had been coming and it felt good to get that first one at the new arena. It was a very good team performance. We had good practice sessions all week and we carried that in to the game with everyone playing together really well.”

“I was very pleased with the way I played and being able to help the guys. With Victor back in the side it helped but I’d also felt good in practice all week and I just took that feeling in to the game and it seemed to work for me.”

Tonight, Defoe pits his wills and talents against a Rocks side that comes in to the Eagles Community Arena for the first time. Newcastle always seemed to have an Indian sign over Glasgow at Sport Central and Defoe is hoping that will continue tonight at The ECA.

“We hope we can carry things over tonight and get another win which will set us up for our other game at Manchester on Sunday. It will be tough, games against Rocks usually are and they are in good form so will be dangerous.”

“Another win would keep our momentum going and keep the confidence up because we need to try and keep it going right to the end of the season. What we have to do tonight is keep playing for each other and play good defence which will help us attack at the other end.”

“We’re confident going in. You have to be as there’s no point playing if you’re not confident. It’s going to be a long weekend with a trip to Manchester on Sunday but we have to start it right tonight and make sure we get a win and then look to make it two on Sunday. That’s our aim as always.”

Last time these two sides clashed was way back in September up in Glasgow when Newcastle came out on top 100 – 85 with Defoe top-scoring for the Eagles with 25 points adding in 8 rebounds for good measure. His team-mates will be hoping for more of the same tonight.

This Sunday fans can watch the Eagles’ road trip to Manchester on the 75-inch screens in the hospitality suite of the Eagles Community Arena from 5pm, straight after the WBBL tip-off against another set of visitors from Scotland, the Caledonia Pride, at 3pm. A ticket for the women’s game includes the live screening and can be purchased online in advance or on the door from 2pm. It’s just £5 per person or £2.50 for BBL season ticket holders.