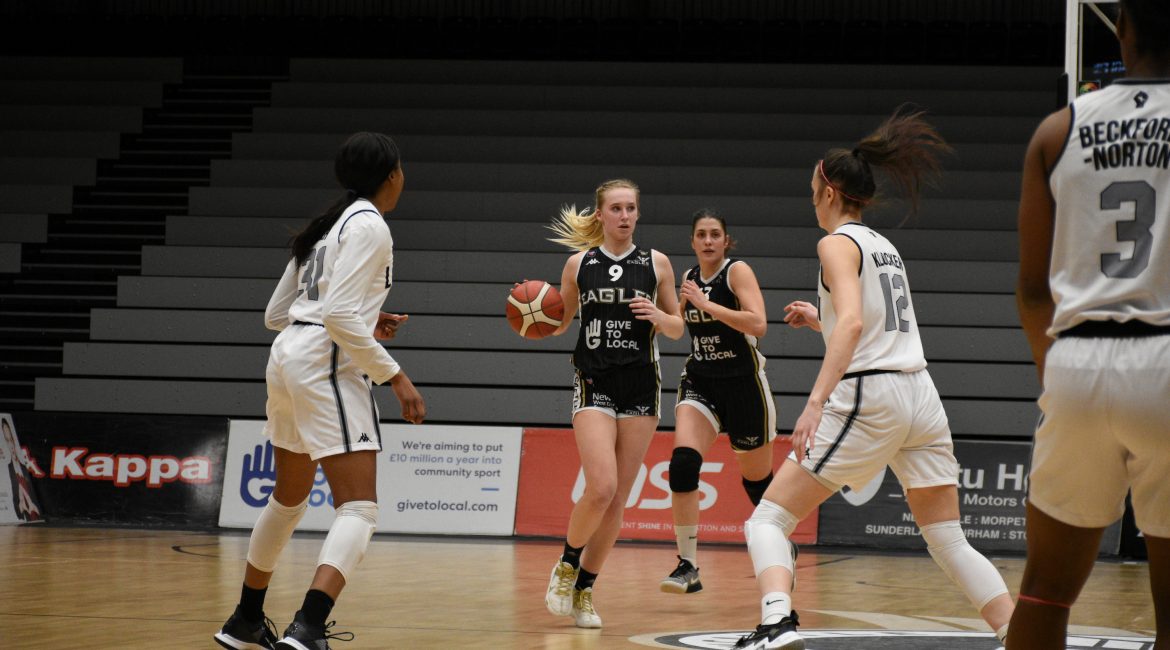 Abby Lowe has revealed Newcastle Eagles were fed up of failure following a miserable February.

And the breakout star of a difficult campaign believes last weekend’s stunning win at Cardiff can spark a late playoff push.

But Lowe admits Newcastle will have their work cut out as they look to bag back-to-back wins for the first time this season.

Star-studded Nottingham Wildcats are the visitors at the Eagles Community Arena this afternoon.

And Lowe said: “We have to respect their roster and we will.

“It’s all about controlling their most productive players and sticking to our gameplan.

“Nobody expects it to be easy against Chesley Shumpert and Jasmine Joyner — they’re two of the best players in the WBBL.

“But I don’t think we’ve been in a better frame of mind for some time. We’ve really gelled in the last few weeks and we’re up for the challenge.”

Few pundits predicted last weekend’s blowout win in Cardiff against an Archers side that won on Tyneside two weeks earlier.

And Lowe is confident Newcastle can carry that form and confidence into a potential firecracker of a fixture at the ECA.

“We should have won a few more games in February and we arrived in Wales angry with the situation we found ourselves in,” she added.

“We were just fed up with the way that things were going and we were determined to turn things around.

“It’s been tough this season and I think all of that frustration boiled over in Cardiff. We focused on a few key things that we needed to put right and just got on with the job.”

Newcastle’s 2-8 league record has left Chris Bunten’s side playing catch-up in the race for this season’s playoffs.

But the Eagles are one of five teams tied on four points heading into the second half of the league campaign.

And Lowe added: “A top eight finish is still the target.

“We’re getting better every week and momentum is huge at this stage of the season.

“We’re heading in the right direction and so let’s wait and see.”

Lowe started the season on Bunten’s bench but injuries and the departures of key players have presented the former Barking Abbey favourite with a starting five chance.

It’s an opportunity the guard has grasped with both hands and she added: “I’ve enjoyed stepping up.

“Nobody likes to see injuries or team-mates leaving but that’s just the way things have turned out.

“I’ve been asked to shoulder some more responsibility and it’s helped my confidence.”

Shumpert and Joyner arrive on Tyneside averaging 20 points per game and the latter was named February’s player of the month.

Joyner leads all players in weekly All-Star Five appearances, with six in total and two more in February.

The all-action forward averaged 23 points, 11 rebounds, three steals and three assists over four games last month, while shooting a league-leading 67% from the field.

Wildcats went 3-1 in February and Joyner had one of the individual performances of the season so far in the first of those games with a huge double-double of 30 points and 16 rebounds against the in-form Manchester Mystics.

Overall, in her third WBBL campaign, Joyner is fourth in the league in scoring, rebounding and fouls drawn and fifth in field goal percentage at 57%.

This afternoon’s clash tips off at 13:30 live on the Newcastle Eagles Box Office with coverage starting from 13:20. Tickets for the live stream are just £2.99 and this is discounted to £1.99 for BBL Season Ticket Holders.