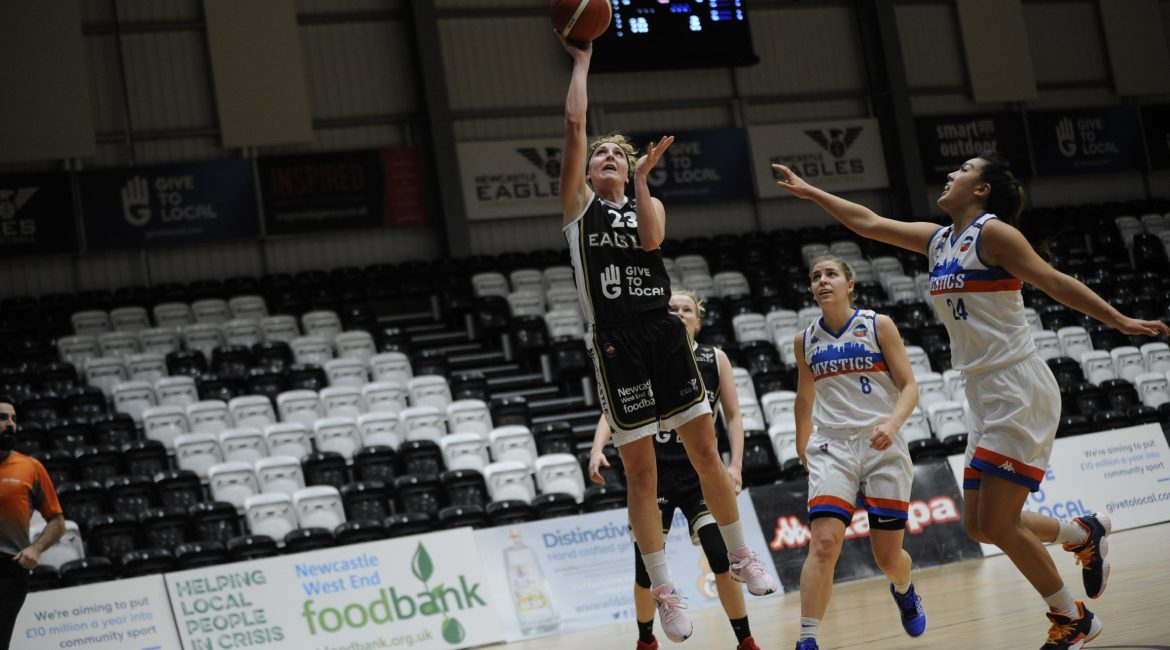 In-form Ali Gorrell has admitted she would happily swap personal glory for a shot at this season’s WBBL playoffs.

Newcastle Eagles’ popular returnee is rolling back the years after starting 2021 in spectacular form.

And the reigning Molten WBBL Player of the Month takes on Cardiff Met Archers today on the back of a record breaking 40-point haul against Essex last month.

But Newcastle lost that clash against the Rebels and Gorrell revealed: “The individual achievements don’t really mean anything when you’re losing games.

“If you’re not having success as a team then nothing else really matters.

“It always feels good to hit a personal high but I want to win games. That’s what it’s all about.”

Newcastle did break their WBBL Championship duck on the road in January with a nailbiting overtime victory against Oaklands Wolves.

And there were plenty of positives to take from a battling defeat against Essex as Chris Bunten’s side narrowly failed to claim back-to-back wins.

“We put two good performances together and I think people are finally starting to feel a bit more comfortable in their roles,” added Gorrell.

“Players are having to step outside of their comfort zones and I can see that my team-mates are becoming less afraid to push themselves.

“The overall intensity of the team has picked up and we feel as if we’re a side that can give anyone a battle between now and the end of the season.

“We don’t expect to beat anyone by 30 points but we do expect to compete and push for the playoffs.”

If Newcastle are to realise their playoff potential then Gorrell’s contribution will be key.

The former Team Northumbria and Sheffield Hatters star averaged a double-double of 25 points and 10 rebounds throughout January.

Gorrell led all scorers as well as breaking the WBBL Championship single games point record at the Rebels.

And the Eagles co-captain leads the league in total field goals made and total free-throws made as the second most fouled player.

But coach Bunten knows his short-handed roster needs to share the scoring load if the club’s playoff dream is to become a reality.

“There’s been a significant amount of disruption so far this season but I’ve played on teams under Chris in the past where we’ve faced a tonne of adversity,” added Gorrell.

“It’s about staying focused and believing in the process.

“This season has been particularly tough with Covid and then losing four key players before the end of January.

“Our starting five looks nothing like it did before Christmas but the flipside of that is the fact that other players are getting a great opportunity.

“They’re starting to grasp that chance with both hands and we’ve seen that impact upon the team’s overall performance in the last few weeks.”

Newcastle’s return to the Eagles Community Arena can’t come soon enough for Gorrell and her team-mates.

But home advantage alone won’t be enough to see off an Archers side seeking a second league win of the season.

“I think Cardiff’s approach will be very similar to ours,” added Gorrell.

“They’ll look at where we are in the table and feel pretty confident that they can pick up a win.

“I’m sure both teams see this weekend as a great opportunity to move up the table.

“But if we continue to focus on our strengths then it’s a game we can win.”

Bunten will hand a late fitness test to co-captain Rachael Bland as the 30-year-old feels her way back from an ankle injury.

And Deborah Rodríguez-Pérez could force her way into the starting five as the Spanish forward prepares for her ECA debut.

This afternoon’s action tips-off at 3pm and we are streaming the game live on our box office from £2.99, discounted to £1.99 for our BBL Season Ticket Holders.