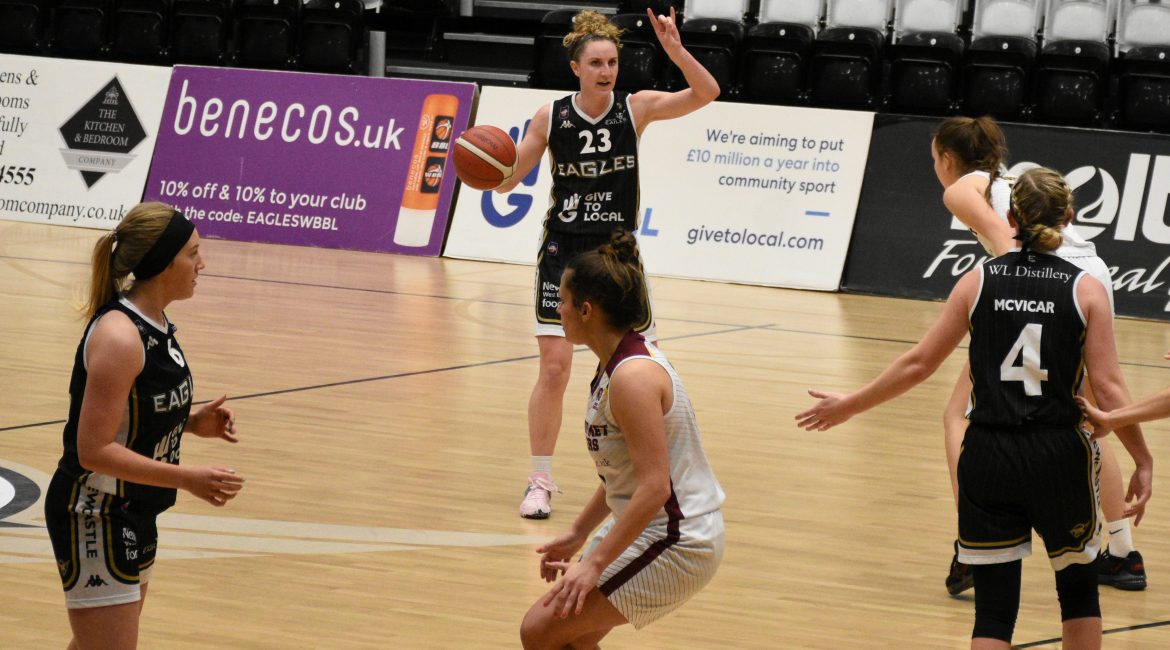 But an under-pressure Gorrell failed to put up the last second shot that could have clinched victory.

And Chris Bunten’s side slipped to a 1-6 record in the WBBL Championship ahead of next weekend’s double header against Caledonia Pride and BA London Lions.

January signing Deborah Rodríguez-Pérez forced her way into the Newcastle starting five ahead of a hotly anticipated home debut.

And the return of fit-again Rachael Bland — who turned 30 the day before — was a huge boost to head coach Bunten.

The experienced Wearsider recovered from an ankle injury in time to face the Archers.

And Bland came off the bench with 110 seconds of the first quarter to play with her team 20-14 down and in need of fresh inspiration.

The visitors had edged ahead midway through the opening period on the back of clinical offence and focused defence.

And the battle between two of the WBBL’s most explosive backcourt stars had gone the way of the Welsh in the early stages.

Elsewhere, combative centre Mara Marchizotti was edging Rodríguez-Pérez inside and January’s player of the month Gorrell had yet to find her scoring touch.

Everything added up to an early Archers advantage and even Bland couldn’t stem the tide as the visitors took 25-16 lead into the second period.

Cardiff’s starters put in a fantastic shift in laying the platform for a deserved first quarter lead.

But it was the contribution of Marlee Bell coming off the bench that began to concern Bunten most.

The British Canadian guard joined the Welsh club last month and made an instant impression on Tyneside — claiming 13 points and five rebounds inside 10 first half minutes.

Both Marchizotti and Rodríguez-Perez were benched by their respective coaches towards the latter stages of a competitive second quarter as the game’s biggest bodies racked up three fouls apiece.

And Newcastle continued to make the most of a fast-improving fast-break offence with Abby Lowe and McVicar both benefitting from swift transition through the lanes.

Another all-action display from Lowe saw the British forward bag 12 points, four rebounds and two assists before the half.

But four turnovers had kept Cardiff keen and better ball management must be the focus for one this season’s breakout stars.

The Eagles trailed by five at half-time but a thrilling third period saw Bunten’s roster spark into life.

Slowly but surely Newcastle ate into Cardiff’s lead and an 18-5 tear to close the quarter broke the fixture wide open.

Gorrell and McVicar led the charge as the former moved to 22 personal and the latter was finally able to break free of Lewis’s shackles.

And Bunten could barely hide his delight as the Eagles’ backcourt pairing began to dominate.

Gorrell collected the rebound from her own missed free throw to level the scores at 63-63 before McVicar sprinted coast to coast before a neat sidestep and conversion under the basket.

The Eagles led 68-65 with 10 minutes on the clock and when Marchizotti picked up a fourth foul in the 33rd minute it should have been advantage Newcastle.

Bell joined her team-mate on four fouls moments later but the Archers refused to take their foot off the pedal and opened up a four point lead with five minutes to play.

A fuming Marchizotti exited the game on the back of a clear offensive foul before Gorrell levelled the scores at 75-75.

But Cardiff’s Sara Jorgensen sank a five-foot floater to fire the visitors 78-77 ahead with 12 seconds on the clock and the Archers clung on for a dramatic win.