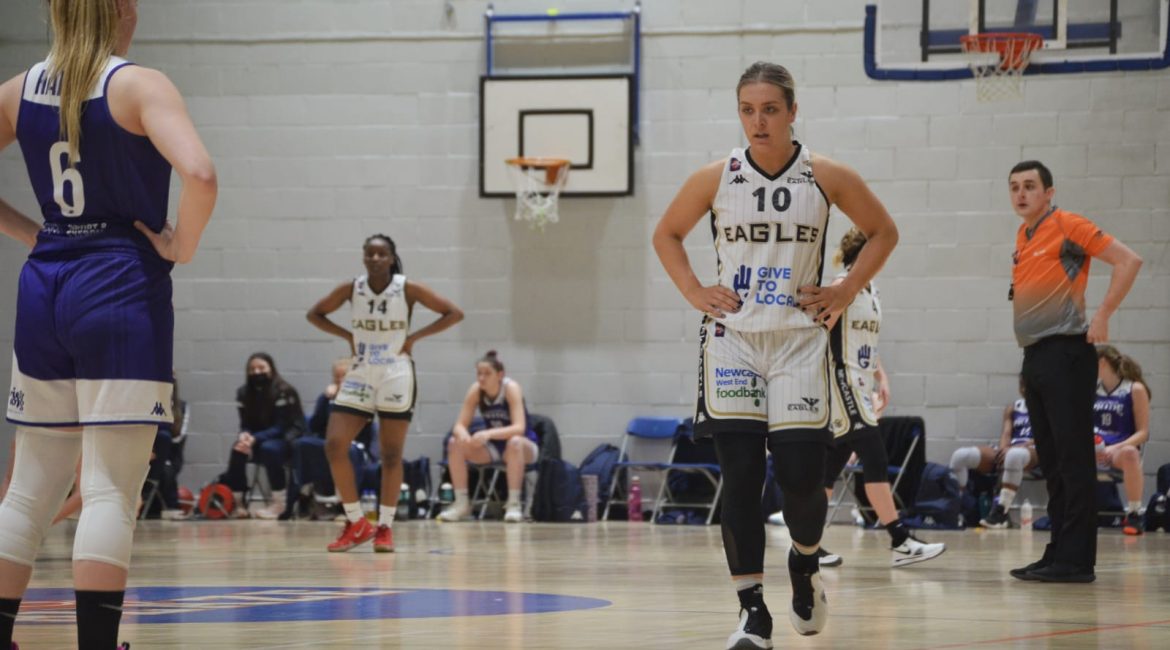 Newcastle Eagles WBBL are on the brink of losing their underdog tag as Chris Bunten’s side goes in search of another big win at Leicester Riders this afternoon.

And the in-form Tynesiders can be a match for any team heading into the post-season.

That’s the verdict of Newcastle rookie Jorjah Smith as the reborn Eagles go in search of a fourth win in five games.

“We enjoy being the underdogs and the attitude that comes with that,” said the Aussie guard.

“But I guess the more games we win and the quicker we improve, the less likely it is that we’ll be taken lightly.

“The performances in the last few weeks mean we’ve reached a point where we’re being taken seriously by every team we play.

“We want to prove to ourselves and to the rest of the WBBL that we don’t belong near the bottom of the table.

“We’re playing more like a top four team right now and a win at Leicester would underline that.”

But the result masked another stellar showing from Bunten’s fast-improving roster.

Unbeaten Suns barely deserved their seven-point win and Smith added: “It shows just how far we’ve come that we were disappointed to lose down there.

“We talked about how we had chances to win the game and in weeks to come we’ll take those chances.

“We’ll win those big games down the stretch and we’ll really make people sit up and take notice.

“I’m part of a team where every player has each other’s back. That togetherness will count for a lot come playoff time.”

Newcastle are still far from guaranteed a top eight finish but the fixture list looks increasingly kind to the Eagles heading into the final month of the regular season.

Following this afternoon’s trip to Leicester, four of the club’s last six league fixtures are against teams in the bottom six.

And securing a playoff place is in Newcastle’s hands despite a dreadful start to a disrupted season.

Smith has been key to helping her side turn things around and she added: “I love it here.

“I don’t regret for one minute joining the Eagles and I’m proud to be part of the journey we’re on.

“I’d like to come back again and play in front of our fans and really get to know Newcastle as a city out of lockdown.

“But even though it’s been a strange season I feel as if the team has benefitted from a huge amount of support and the players really appreciate that.”

And Smith added: “I don’t think Chris gets the credit he deserves.

“The work that he puts in on and off the court is incredible and his commitment to Newcastle is on a different level.

“He’s such a strong advocate for the Eagles’ women’s programme and he’s passionate about his work.

“He pushes us as players to be better every day and he’s so invested in every one of us.”

Leicester sit second in the WBBL Championship table and the Riders have lost just once in the league.

Two convincing victories against Newcastle earlier this season mean the hosts are firm favourites to win again this weekend.

But the remodelled Riders faced a battling Manchester Mystics last night and a second fixture inside 24 hours will put added pressure on the hosts.

“We see this weekend’s game as another golden opportunity to make a real statement,” added Smith.

“The vibe within the group right now is 100% positive. We believe in ourselves and we’re going down there to win.”

The game is free to watch on the WBBL YouTube channel from 4pm.