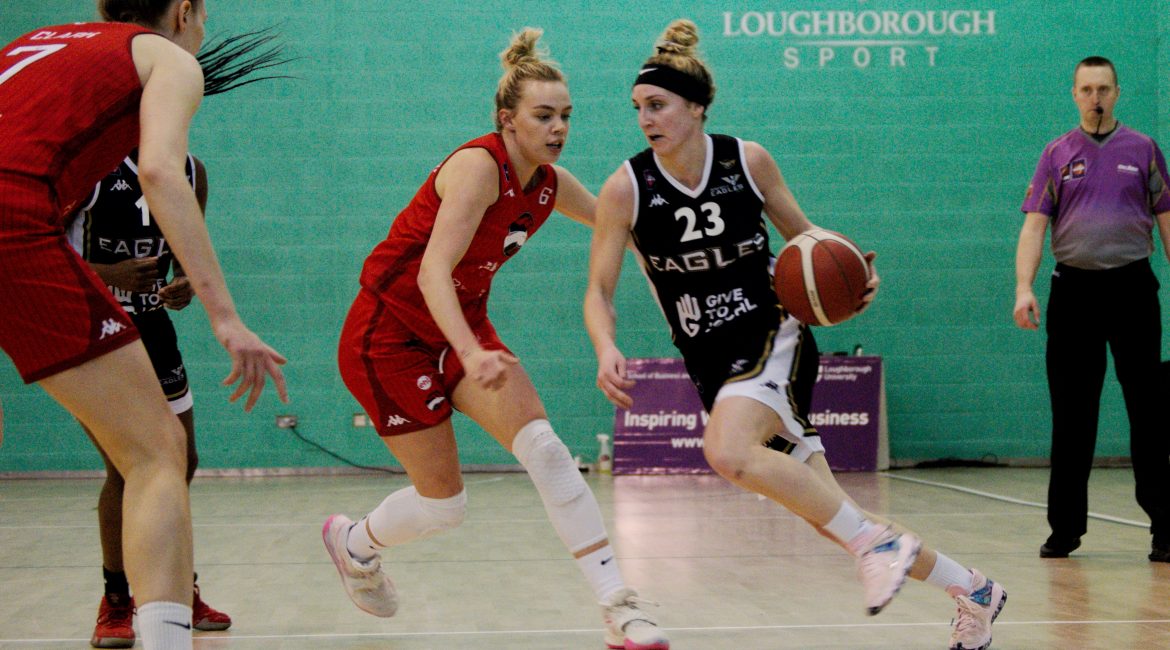 Chris Bunten must go back to the drawing board after a second successive defeat stopped Newcastle Eagles’ brave play off push in its tracks.

Title-challenging Leicester Riders exposed a roster lacking strength in depth to complete a comfortable third win on the bounce against Newcastle.

But Bunten will refuse to hit the panic button on the back of one bad day at the office — focusing instead on six winnable games to close out the regular season.

Four of the club’s remaining WBBL Championship fixtures are against sides in the bottom six.

And if next weekend’s Vertu Motors Arena clash against high-flying Essex Rebels will be a true test of the Eagles’ mettle then there are easier matches to come.

Newcastle were unusually slow out of the blocks at Loughborough University and never really recovered as the homecourt Riders led from tip to buzzer.

An Ali Gorrell three-point play midway through the first quarter reduced the deficit to a point.

But that was as good as it got for the women in black on an afternoon to forget for the out-of-sorts Tynesiders.

Jesper Sundberg’s side headed into yesterday’s clash on the back of a hard-fought win against Manchester Mystics.

And Newcastle must have hoped fatigue would play a part as the hosts tackled game two of an energy-sapping weekend double header.

But there was no sign of tiredness as the East Midlanders went about their business with total confidence.

A 45-25 Riders lead at the half was fully deserved and the Eagles had no answer to a series of punishing plays in the paint.

Leicester bigs Amber Smith and Azania Stewart, who combined for 23 points and 12 rebounds, proved too hot to handle in the paint.

But the Eagles were often the architects of their own downfall as they shot a pitiful 29% from the field before the break.

By contrast, the hosts had converted 16 of their 33 field goal attempts to lay the foundation for a comfortable win.

And there was little let up after the interval as Sundberg’s side continued to spread the scoring and make their chances count.

Newcastle looked a shadow of the side that had pushed undefeated Sevenoaks Suns to the limit just eight days earlier.

If losing the third period by a point represented a slight improvement, then it mattered little in the context of a fixture that was all but over after 20 minutes.

Bunten tried everything to turn things around but the Eagles continued to shoot poorly throughout the second half.

And leading scorer Gorrell, who finished with 18 points and six rebounds in 35 minutes, found little support from her team-mates at the offensive end.

No other Newcastle player made it into double figures as the visitors converted just 17 of their 64 shots.

But another spirited display from Ori Chukwu-Etu — who hauled down seven boards in just 22 minutes against her towering opponents — maintained the breakout star’s run of form since the turn of the year.

Elsewhere it was difficult to take any positives from a tough trip down the M1.

And the Eagles need to regroup and refocus ahead of Sunday’s homecourt clash against WBBL surprise packages Essex.

Newcastle’s form leading up to the Leicester fixture had filled Bunten with confidence heading towards the post-season.

And a first poor performance since February shouldn’t detract from the fact that this is an Eagles team more than capable of emerging from the playoff pack to launch a late run for glory.