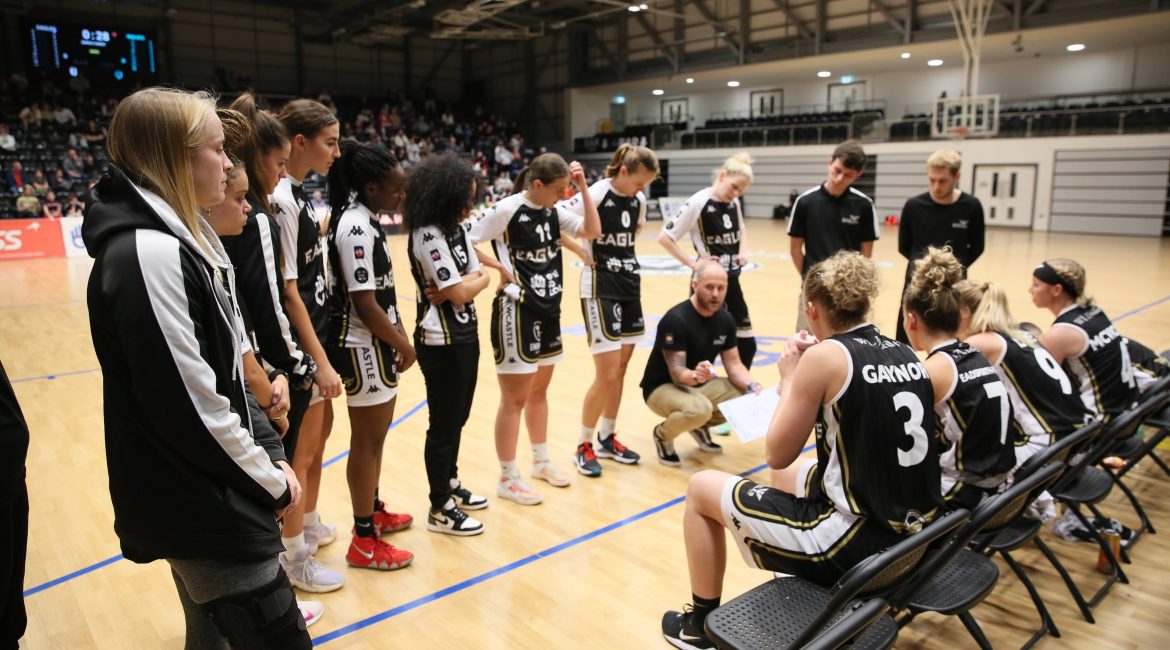 Chris Bunten is prepared to protect Marina Fernandez for as long as it takes after revealing the Spaniard will miss this afternoon’s cross-border clash in Edinburgh.

Newcastle Eagles’ skipper was a surprise omission from last weekend’s line-up as the hosts suffered a shock defeat at the hands of Oakland Wolves.

And Bunten revealed he won’t be rushing back Fernandez anytime soon after she hyper-extended her knee in practice.

“Marina was keen to return to practice this week and her injury isn’t serious,” explained Newcastle’s playcaller.

“But it’s the same leg as the Achilles injury that ruled her out for the entire season this time last year.

“And with that in mind we’re being ultra-cautious. We need to think about Marina’s contribution throughout the season and not just this weekend.”

Bunten is still awaiting definitive news on Courtney Clasen’s knee injury almost a fortnight after the US star fell awkwardly against Durham Palatinates.

The WBBL rookie is on crutches with her leg in a brace and looks like facing an extended spell on the sidelines.

“Courtney’s had her scan and we’re just hoping for some clarification soon,” said Bunten. “It’s a waiting game.”

To compound Newcastle’s problems heading into this afternoon’s league fixture, Abby Lowe faces a late fitness test after turning her ankle against the Wolves.

And suddenly the Eagles’ treatment room is beginning to fill up fast…much like this time last year.

“The difference is that we’ve got plenty of bodies and plenty of strength in depth,” added Bunten.

“There are opportunities for other players to step up and I don’t have to rush back a player like Marina if it’s too soon.

“Injuries aside I expect us to go up to Scotland and win the game this weekend.

“I don’t expect it to be anything like the victory we secured against Pride last month.

“They will have improved and we’re a few players down. It’s a game we should be winning but I’ll be focusing on a positive performance rather than the scoreline.

“A number of players from both teams got some key minutes under their belts playing for their universities in midweek and I’m expecting a high intensity match.

“If we can match Caledonia in terms of energy then we know we have the talent to win the game.”

Bunten is demanding a convincing response to last Saturday’s dismal defeat against Oaklands as the Eagles slumped to a 77-64 loss in front of a record WBBL crowd.

Nobody expected the previously winless Wolves to take the points from the Vertu Motors Arena — not least Newcastle’s dumbfounded playcaller.

“It was a shock result and a shocking performance,” he conceded. “Offensively we didn’t execute and defensively we conceded far too many points in the first quarter.

“I can’t really explain why it was such a poor performance. Practice hadn’t been great that week and there was a lot of extra stuff happening on game day.

“As always, I take responsibility for that.

“Perhaps the size of the crowd and the level of expectation played its part but nobody was looking for excuses after the game — we were just looking at how we could put things right.

“This weekend we have a chance to prove it was a flash in the pan and that we can execute things properly and do our jobs well.

“We need to focus on better ball movement and better execution and raise the level of everything that we do.

“We’ll bounce back. I’m sure of that.” This afternoon’s Championship clash tips off at 1.45pm.