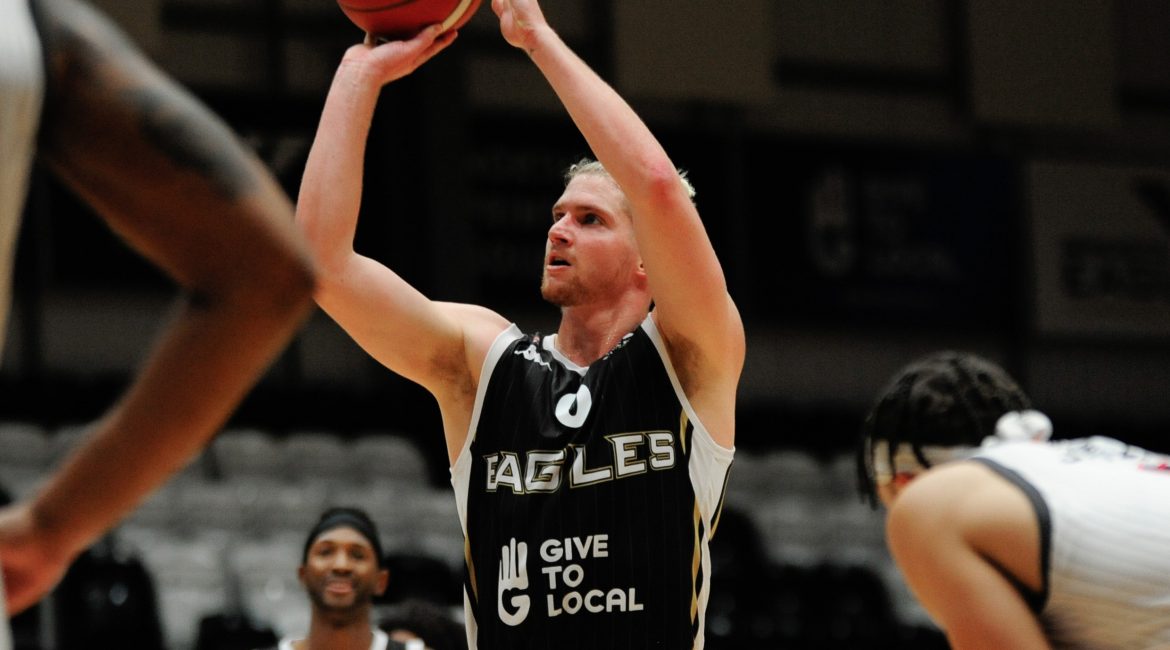 Newcastle Eagles go into tonight’s home BBL clash with Worcester Wolves in a buoyant mood. They had yet another productive week in what is proving to be a particularly good and promising season so far.

On Tuesday night they survived a scare down at Bristol to advance in the BBL Trophy and then were delighted to hear that head coach Ian MacLeod was named Coach of the Month for January, his second consecutive award.

This also came on the back of former Notre Dame University Captain Rex Pflueger being called up to the 24-man GB squad for the second time. The hard-working, tough defending British American will be looking to make the final 12-man roster as he did on his previous call-up.

But he also knows there’s domestic business to take care of and is aware that the Eagles have to maintain the momentum they have built up and carried on down at Bristol. Despite losing the first quarter 30 – 13 Newcastle bounced back to take a dramatic 74 – 73 win at the buzzer.

“I think we settled down after that first quarter. Travelling so far on a game day it can always be difficult to get our mindsets right especially right off the jump. But I think we came to ourselves and how we can play.”

“We locked down defensively and that really got our offence going and we were able to come through well in the final three quarters. It keeps the run going as we’re trying to get as many trophies as we can.”

Pflueger mentioning trophies seemed apt when he commenced his thoughts particularly with MacLeod adding the January Coaching award to his first-ever in December. The rookie professional brought in by the second year Coach spoke highly of his play-caller.

“It was very well deserved. I think he’s been doing a great job ever since I got here. So, he deserves both of those awards and I think as long as he keeps putting in the effort he does and we keep listening to and reacting to it with our talent we’re going to be a tough team to beat.”

“He’s done a great job and especially in tight situations when the games have come down to the wire. But I also don’t want to take away how big our veterans have been, Fletch (Rahmon Fletcher, Darius (Defoe) and Drew (Lasker) constantly being there as well.”

“I think helping coaching as well and guiding. Not just from a coaching perspective but as a team mate as well and have been overall amazing this year. So I have to give them a lot of credit also.”

Tonight, the Eagles face a totally different Wolves side to the one that they beat 88 – 75 at The Eagles Community Arena in the league back on December 18th last year. That line-up did not include any of the four American recruits who have now settled into their roster.

It will be a clash of two in-form teams as Worcester have won their last three games coming into Newcastle whilst the Eagles are on a six-game winning streak. Pflueger is aware of the task ahead.

“It’s going to be a tough one but it’s also going to be good for us. We’re accepting all challenges right now to make sure our game is where it needs to be. After the cup games and winning a trophy we need to get over that hangover and keep our minds focused as we look to add another trophy.”

“We’re at home and it’s always a nicer day when you don’t have to travel for a game. It’ll be a nice change and we’re all really looking forward to it.”

Fans can watch live on the BBL Player with coverage starting from 5:50pm and the tip-off at 6pm.