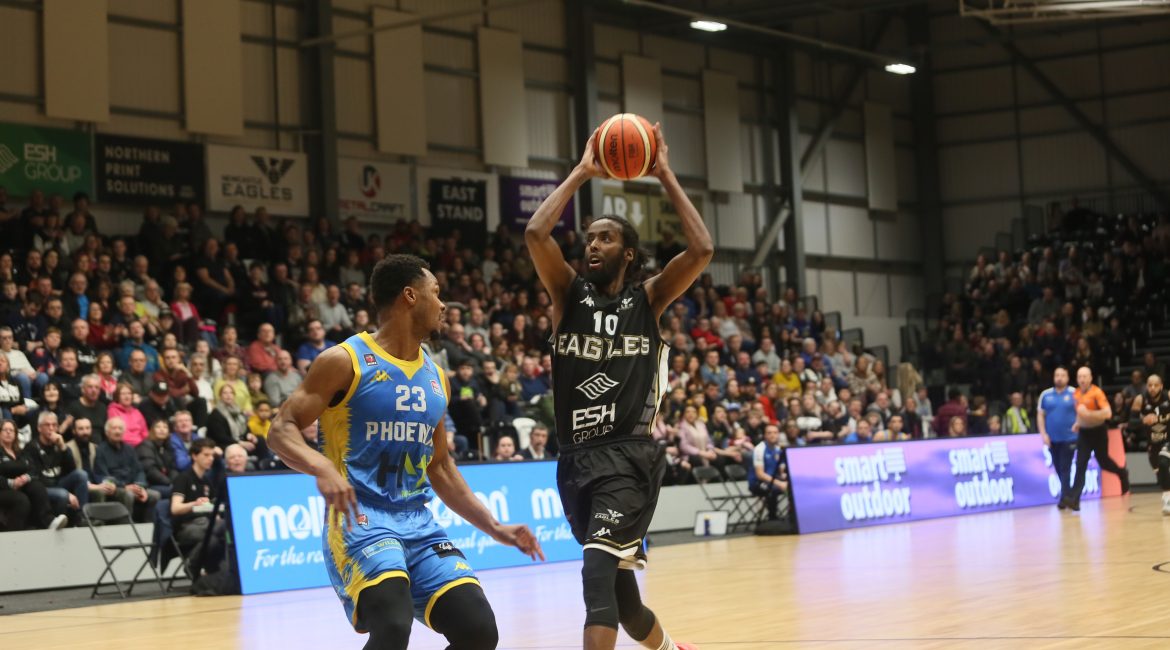 The in-form Frenchman believes the men in black have finally turned a corner following a season-defining 72 hours on Tyneside last weekend.

But Aded-Hussein revealed Newcastle are still chasing the consistency that could be the difference between success and failure in 2020.

“We owe Worcester big time because they have beaten us twice already this season,” said the 26-year-old.

“We’re fully focused on getting that win against the Wolves.

“We know they have a strong big man in Amir Williams and Worcester match up well with us inside.

“We’re used to a fast game and that’s not what they’re about. But we need to find a way of beating them before the trip to Sheffield on Sunday.”

If last weekend’s come-from-behind league win against Surrey, followed by passage through to the BBL Trophy against Cheshire, represented a turning point for the Eagles then this weekend’s double header could be just as significant heading into the post-season.

And sixth-placed Sheffield lie in wait on Sunday still hoping to secure their own top four finish ahead of the playoffs.

The importance of another huge double-header weekend is not lost on Aded-Hussein and he warned: “We still need to work on our consistency.

“Reaching the final can be a turning point but we know that we still didn’t play to our maximum in either game last weekend.

“We’ve had a lot of players coming in and out all season and some major players are missing right now. That’s always difficult.

“But we are a bit different to most teams in that we have a number of options.

“The power of this team is its versatility. We have a rich program in that respect.

“There are some teams that just can’t perform to the same level if they are missing their key player.

“But we have so many guys who can do so much that we are not going to use a few injuries as an excuse.”

And although Gettys looks most likely to make a swift return to action, interim head coach Ian MacLeod will take no risks regarding his sidelined trio.

Aded-Hussein, who bagged a combined 32 points and 20 rebounds last weekend, looks certain to start against Worcester.

And he added: “I had a chance to go back home during the international break last month and it really helped me mentally.

“It was a chance to recharge the batteries.

“My main goal last weekend was to help us make the final.

“It’s never been about individual numbers for me this season – it’s about helping Newcastle to get back to where they belong.

“There’s been a lot of pressure on this team given the club’s history and it feels great to be in the Trophy final.”

Tonight’s fixture at the ECA tips off at 7.30pm with Newcastle back in action in Sheffield from 5pm on Sunday. Both games will be streamed live via the BBL’s YouTube channel: