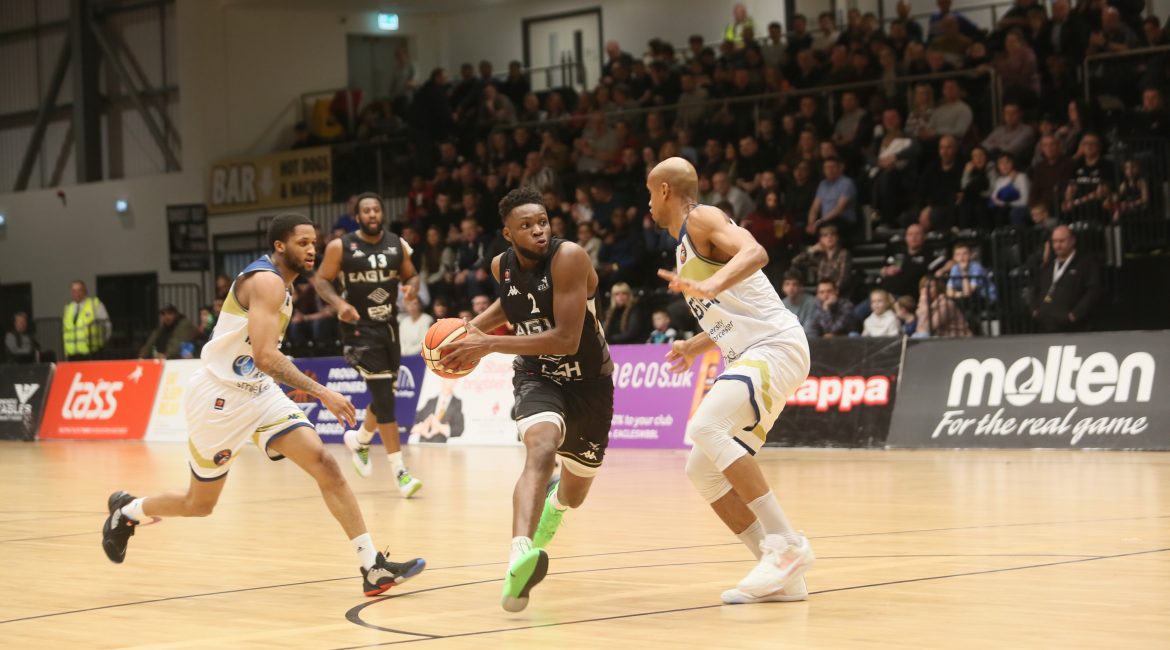 A stuttering offensive performance coupled with an error stricken defensive showing were the catalysts in Newcastle Eagles 95-79 loss at the hands of Worcester Wolves in front of a packed Eagles Community Arena.

Heading into the contest on the back of a season defining 72 hours the weekend prior, Newcastle were out for revenge, having previously lost their last two fixtures against Worcester.

While it was Newcastle who opened the scoring curtesy of some good work from guard Rahmon Fletcher, Worcester slowly began to take control of the first half.

However, while Worcester were beginning to take control of the contest, this control did not stretch to Amir Williams, who somehow managed to fluff his big highlight reel dunk, much to the delight of the ECA faithful.

What followed Williams’ mistimed finish was a struggle, with both sides showing off their defensive resolve early doors.

Eagles Academy Successes Down The Stretch

And while Worcester did managed to take a narrow lead at the end of Q1, Newcastle were still in touching distance of their BBL rivals with the score sitting at 17-25 in visitors favour.

After initially matching their opponents stride for stride in the opening portion of the contest, Newcastle suddenly found themselves unable to contend with Worcester’s offensive firepower – with guard Kofi Josephs playing a starting role for the visitors.

Suddenly, Newcastle were in an offensive shootout and unfortunately it looked as though they just could not cope.

While Eagles forward Mike Morsell, who finished the contest with 27 points, continued to put up numbers offensively, Newcastle looked lost on offense, with Worcester punishing the hosts sloppy errors.

For all of Morsell’s hard work, Newcastle’s perimeter defence continued to let them down – emphasised by Worcester’s strong shooting day from outside the arc.

Staring down a 42-24 deficit midway through Q2, it was beginning to look like it was going to be a bleak evening for the hosts.

While guards Rodney Glasgow and Fletcher combined for three quick back to back scores, Worcester were still very much in control, emphasised by Josephs supreme shooting which silenced the ECA following the Eagles flurry of scores.

And when the half-time whistle went, Newcastle were staring down a significant deficit with Worcester leading the contest 53-37.

With it all to do in the second half, Newcastle did come out hot after the half time interval to cut Worcester’s lead.

But sadly, it looked as though it was going to be an evening where nothing was going to break right for coach Ian MacLeod’s side.

On both sides of the ball, nothing seemed to be working for the hosts.

Conversely however, everything seemed to be working for Worcester, finished the contest with 6 players scoring ten points or more for the visitors.

Newcastle did manage to keep up with Worcester in the second half of the contest.

But unfortunately for Newcastle, the damage was done at the end of the second quarter, leaving Newcastle with much to do ahead of their Sunday afternoon clash against Sheffield Sharks – the contest finishing 95-79 to Worcester when the full time whistle went.